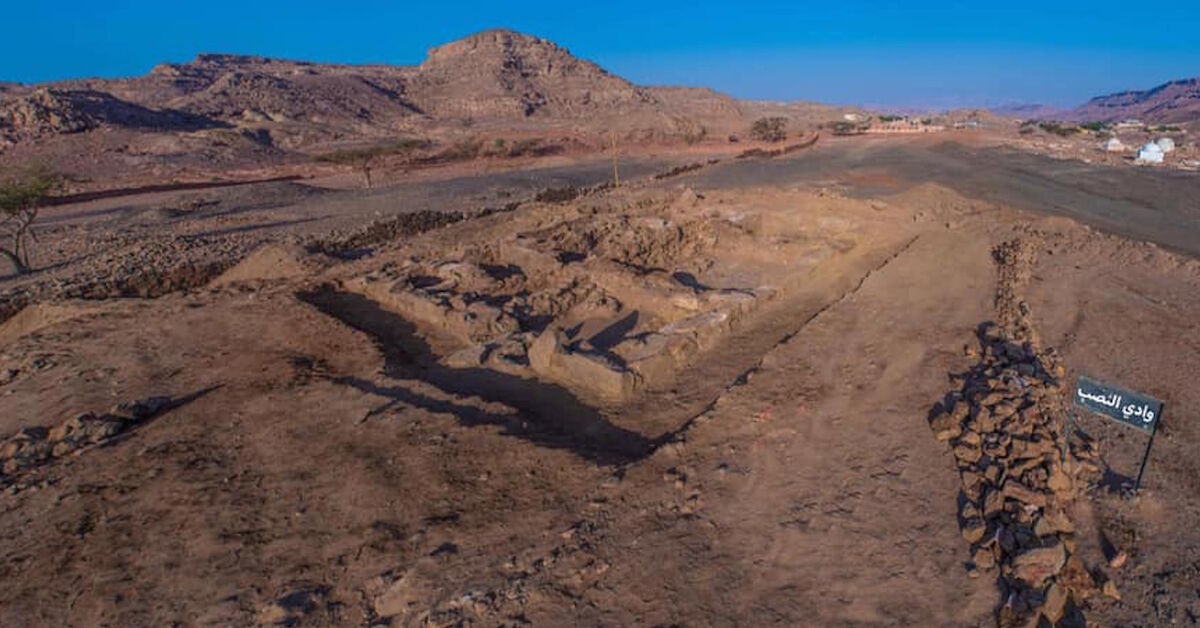 CAIRO â€” The Egyptian Ministry of Tourism and AntiquitiesÂ announcedÂ Jan. 10 the discovery of the remains of a building that is believed to have been used as the headquarters of the leader of the Egyptian mining expeditions in the Sinai Peninsula during the Middle Kingdom era, which dates back to 2055-1650 B.C., and includes the era of the 11th and 12th dynasties.

Secretary-General of the Supreme Council of Antiquities Mustafa al-Waziri said in a Jan. 10Â statementÂ that the Egyptian mission is the first to carry out excavations in the Wadi al-Nasab area in southern Sinai. He explained that the newly unearthed site is located in a distinct area in the center of Wadi al-Nasab and in the middle of the copper and turquoise mining areas.

According to Waziri, the site is a square-shaped building consisting of huge blocks of sandstone, while the floor consists of stone tiles extending over an area of â€‹â€‹approximately 225 square meters (2,422 square feet).

The head of the Egyptian archaeological mission that made the latest archaeological discovery, Mustafa Nour el-Din, told Al-Monitor over the phone, â€œThe discovered building was used as headquarters for the leader of mining expeditions during the Middle Kingdom, and it reveals the history of mining in ancient Egypt.â€

He said, â€œAccording to the studies conducted by the mission and the inscriptions on the pottery found inside the building, this building was abandoned during the Second Intermediate Period after the end of the Middle Kingdom, and during the presence of the Hyksos in Egypt. It was looted, some of its contents destroyed, and then it was rehabilitated during the New Kingdom period before being subsequently exploited by Cyrus [the Great]. We found traces of copper smelting furnaces dating back to this period.â€

Nour el-Din noted, â€œThe building was later used during the Roman era as some internal modifications were introduced to it, including separating walls between the halls.â€

He said, â€œThe head of the mining mission in ancient Egypt enjoyed [important] titles and he enjoyed a high standard of living.â€

Nour el-Din added, â€œThe building consists of two floors. The mission found on the top floor four copper ingots, each weighing up to 1,300 grams [3 pounds]. Also in one of the rooms of the first floor a workshop for processing turquoise was found. Excavations extended to the vicinity of the building where three copper extraction caves were discovered.â€

Hisham Hussein, supervisor of the Supreme Council of Antiquities in southern Sinai, told Al-Monitor over the phone, â€œThe southern Sinai governorate is home to turquoise and copper mining areas, and no Egyptian archaeological mission has entered it since the return of Sinai to Egyptian territory after the departure ofÂ Israeli forces [in 1982].â€

He said, â€œThe Egyptian Ministry of Antiquities instructed us to conduct excavations in the Wadi al-Nasab area in November last year, and today we were able to unearth the latest discovery of the building.â€

Hussein explained that â€œin some rooms of the discovered building, turquoise refining workshops were found along with stones used to weigh turquoise. There are Bedouin tribes who continue to use the same stones to weigh turquoise to date.â€

He noted, â€œThe mining missions that existed during the Middle Kingdom had more than 1,600 members, which is a very large number, and they included many disciplines, as some of them were working on studying the geology of the place, while others specialized in smelting minerals, and yet others in providing food for the expedition. All of this is inscribed on the walls and antique plaques [found on the site].â€

Regarding the importance of the latest archaeological discovery, he said, â€œThis discovery confirmed the Egyptian presence since ancient times [in Sinai], and this serves as a political proof thatÂ Sinai is EgyptianÂ with roots steeped in history, refuting claimsÂ that Sinai is not Egyptian.â€

Hussein Abdel Basir, director of the Antiquities Museum at the Bibliotheca Alexandrina, told Al-Monitor â€œThe importance of this discovery lies in the fact that it gives information for the first time about mining in ancient Egypt, as we lack sufficient sources of information about mining during that period of Egyptian history.â€

He noted, â€œThe discovery also provides information about the era of the Middle Kingdom, which witnessed an urban renaissance. This urban evolution was made possible thanks to mining extraction, which also helped establish the state following the First Intermediate Period that witnessed political turbulence and a decline in urban development.â€

In a Jan. 10Â statement, the Egyptian Ministry of Tourism and Antiquities said that the latest discovery comes within the 2021-22 development project for Sinai governorate.

He concluded, â€œSinai has yet to reveal more secrets, and it needs years of archaeological work, as more archaeological discoveries are expected to be found during the coming period.â€