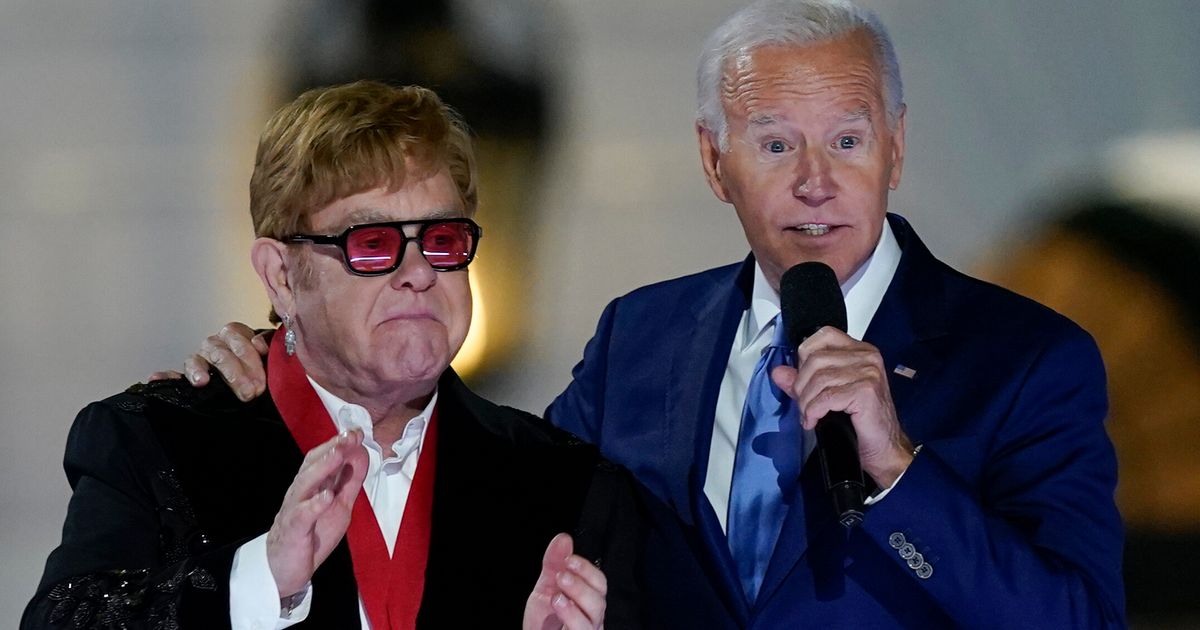 With that, the White House South Lawn was transformed into a musical lovefest Friday night as John played a farewell gig to honor everyday “heroes” like teachers, nurses and AIDS activists. But as it turns out, the event was also to honor the 75-year-old British songwriter — President Joe Biden surprised him with the National Humanities Medal for being a “tidal wave” who helped people rise up for justice.

John seemed almost overcome by the accolades, telling the audience of 2,000 people: “I don’t know what to say. … I don’t know how to take a compliment very well but it’s wonderful to be here amongst so many people who have helped my AIDS foundation and my heroes, that ones that work day to day on the front line.”

He said he’d played some beautiful venues before, but the stage in front of the White House, beneath a massive open-air tent on a perfect autumn night, was “probably the icing on the cake.”

He kicked off the show with “Your Song,” his first big international hit.

Biden and first lady Jill Biden talked about the British singer’s activism, the power of his music and his all-around goodness. The event was dreamed up and paid for by A+E and the History Channel.

The night, in fact, was called “A Night When Hope and History Rhyme,” a reference to the poem Biden quoted by Ireland’s Heaney.

It was an honour to perform @whitehouse and be presented by President @JoeBiden with the National Humanities Medal for my contribution to music and the work through @EJAF to end AIDS!

We’ve reached over 100m people with HIV and we couldn’t have done it without our supporters❤️ pic.twitter.com/YiZM8eUQme

Sir Elton — he was knighted in 1998 by Queen Elizabeth II — has sold over 300 million records worldwide, played over 4,000 shows in 80 countries and recorded one of the best-selling singles of all time, his 1997 reworking of “Candle In The Wind” to eulogize Princess Diana, which sold 33 million copies.

John punctuated the hits Friday with emotional tidbits of his history, including a shoutout to Laura Bush and former president George W. Bush for his administration’s emergency plan for AIDS relief, and a story of how a dying Ryan White and his mother pushed him into advocacy in the first place, and helped him get sober.

“I wouldn’t be here talking tonight,” he said. “They saved my life.”

He then dedicated “Don’t Let The Sun Go Down On Me” to Ryan.

Despite the presence of plenty of lawmakers, the political speak was kept to a minimum, except for when John said, “I just wish America would be more bipartisan on everything.”

It was his first White House gig since he performed with Stevie Wonder at a state dinner in 1998 honoring British Prime Minister Tony Blair. John is on a farewell tour that began in July after performing for more than 50 years.

The show came together after A+E Networks and the History Channel asked the White House and John if they’d be up for a collaboration honoring “everyday history-makers” as well as John himself.

It’s not clear whether the show will be broadcast. John has worked with A+E in the past on his global HIV/AIDS charity, the Elton John Foundation, which has raised more than $525 million to combat the virus around the world.

John is sticking around to play a sold-out show at Nationals Park Saturday.

The president and first lady are big fans. Biden wrote in a 2017 memoir about singing “Crocodile Rock” to his two young boys as he drove them to school, and again later to son Beau before he died of cancer at age 46.

“I started singing the lyrics to Beau, quietly, so just the two of us could hear it,” Biden wrote. “Beau didn’t open his eyes, but I could see through my own tears that he was smiling.”

John played the song Friday, saying someone told him Biden used to sing it to his little boys. “I can’t imagine him singin’ it,” John quipped before suggesting the president come up on stage. He did not. But the whole crowd did do the “La-La-Las” from their seats.

Surprise for Elton John as President Biden and First Lady Jill Biden present him with the National Humanities Medal citing his artistic work and philanthropy. ⁦@eltonofficial⁩ said he would “treasure” the honor. pic.twitter.com/6LNBRV29dd

Biden’s predecessor, Donald Trump, was also a fan of John. He tried to get John to perform at his 2017 inauguration but John declined, saying he didn’t think it was appropriate for a Brit to play at the swearing-in of an American president.

The White House insisted Friday’s show wasn’t an effort to troll Trump, who has praised John in his books and has often featured John’s music — including “Rocket Man” and “Tiny Dancer” — in his pre-rally playlists over the years. Trump nicknamed North Korean leader Kim Jong Un “rocket man” for his record of test-firing missiles.