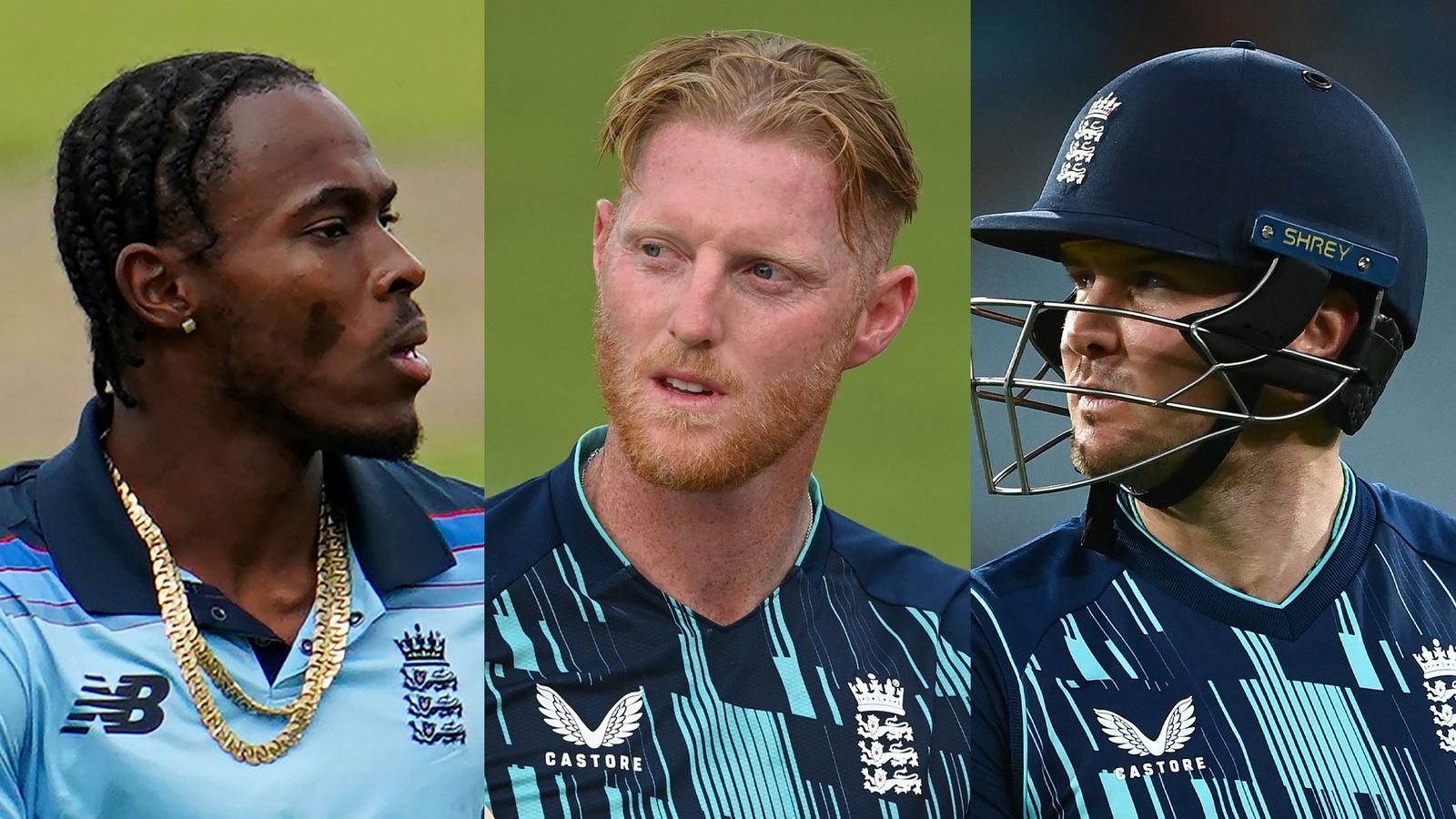 After winning the T20 World Cup in late 2022, England will be aiming to retain the 50-over version in November this year.

Much has changed in English cricket of late (new captains, new coaches, new director of cricket, winning Test matches and winning them in style) but the one-day international side England field at the World Cup in India this autumn could have a familiar feel to it.

As many as nine of the 11 who lined up in the World Cup final against New Zealand four years ago could take the field, with the only certain absentees the retired former captain Eoin Morgan and seam bowler Liam Plunkett, who is now based in the USA.

The chances of the other nine being in England’s first XI range from pretty much guaranteed (captain Jos Buttler, Joe Root, Adil Rashid) to certain if fit (Jonny Bairstow, Jofra Archer, Mark Wood) to very much up in the air (Jason Roy, Chris Woakes, Ben Stokes)

England’s ODIs in South Africa – all live on Sky Sports

Roy and Woakes are in England’s squad for the three-match ODI series in South Africa – each game is live on Sky Sports with fixtures on January 27, January 29 and February 1 – but Roy’s form has been sketchy for a while and Woakes faces pressure for his place due to the continued development of Sam Curran.

As for Stokes, he announced his retirement from ODIs last year amid a packed cricketing calendar, with the all-rounder opting to focus on leading England’s Test turnaround and play T20 internationals. It was a decision that worked out quite well…

However, he refused to rule out returning for the World Cup when asked about the possibility in November, saying: “Who knows how I might feel at the time? Going to a World Cup is an amazing thing to represent your country. At the moment I’m not thinking about that.”

And white-ball coach Matthew Mott revealed ahead of the South Africa series he has even had conversations with Stokes – albeit light-hearted ones – about reversing his retirement, making it clear the door is always open.

With England’s final Test of 2022 taking place in July, and the red-ball side not then back in action until a series in India in early 2024, the second half of Stokes’ year could be pretty barren without a World Cup appearance. Watch this space…

Stokes is not in South Africa. Neither are Root (playing T20 cricket in the UAE), Wood (rested) or Bairstow (recovering from a broken leg he sustained on a golf course). Liam Livingstone (knee) is another absentee. So there is an opportunity for Roy to give a timely reminder his talent and for Harry Brook and Ben Duckett to try and nail spots in either the squad or the XI.

Roy was dropped from England’s T20 squad after a lean run of form internationally and domestically last summer, with the opener averaging 12.66 across England’s T20Is against India and South Africa and managing only 51 runs in six innings – three of which were ducks – for Oval Invincibles during The Hundred.

The 32-year-old was retained for the three-match ODI series in Australia, which took place just days after the T20 World Cup, but scratchy scores of six, nought and 33 did little to suggest he might remain a permanent fixture.

It should not be forgotten just how much Roy’s return from injury for the latter stages of the 2019 World Cup galvanised England on their run to the trophy. Neither should we disregard his ODI record – nearly 4,000 runs across 110 matches, with 10 hundreds, including an England-record 180 against Australia at the MCG, plus 21 fifties.

But there are players queuing up for the opening spots. Two of them, Phil Salt and Duckett, are in South Africa. Then there is Bairstow. Plus, Alex Hales – recalled for the T20 World Cup following Bairstow’s injury – and James Vince have been scoring regularly in the International T20 League in the UAE.

Will Jacks has been tonking runs and pulling off stunning catches in the SA20 and Zak Crawley, a Test regular, at times a free-scoring one, has designs on breaking into the limited-overs team: “I’ve always actually found white-ball probably comes more naturally to me,” Crawley said in a recent Cricinfo interview.

Malan scored a century from No 3 in that largely forgettable Australia series, while Duckett and Brook impressed in the 4-3 T20I series win in Pakistan and then in the 3-0 Test sweep against the same opposition in December.

Duckett and Brook’s proficiency against spin should help them make England’s World Cup squad. The way Brook ended 2022, it is hard to envisage a player with a “touch of genius” being left out of any XI, whatever the format.

In terms of spin bowling, England appear well stocked: with leg-spinner Rashid, off-spinner Moeen Ali and Livingstone, who bowls a bit of both.

There may be a chance for 18-year-old Rehan Ahmed to gate-crash the squad, though with the young leggie – who took a five-wicket haul on Test debut in Pakistan in December – in line for a call up for the ODI series in Bangladesh in March.

Should the all-rounder impress there, in similar conditions to what England may face in India, a World Cup spot could be his.

The South Africa series is all about Jofra, with the talented but injury-blighted paceman due to play for England for the first time since 2021 having seen his career stalled by elbow and back injuries.

Archer has enjoyed some encouraging outings in the SA20 – wickets, quick deliveries, a sharp run out – but the games against South Africa will be the acid test of his fitness and just how he is bowling post-surgery. With Wood given a breather, Archer and another fit-again fast bowler, Olly Stone, will provide the venom.

Supplementing them in South Africa will be Woakes and Player of the T20 World Cup Curran – Curran with 13 wickets in six games at an average of 11.38 as England won that tournament – plus David Willey and Reece Topley.

Willey was in England’s T20 World Cup squad but did not play a game, while fellow left-armer Topley was due to be a key player for England in that competition before stumbling on the ‘toblerone’ boundary markers during a training drill at The Gabba and being ruled out shortly before the World Cup began.

Topley looks a shoo-in for the 50-over World Cup after taking 13 wickets in seven ODIs in 2022, including England-record figures of 6-24 against India at Lord’s in July, plus 17 wickets in 16 T20 internationals.

That could leave England’s World Cup squad looking something a little like the below, unless Stokes unretires.

Watch England’s three-match ODI series in South Africa live on Sky Sports Cricket. Coverage of the first game, in Bloemfontein, begins at 10.30am on Friday ahead of the first ball at 11am.