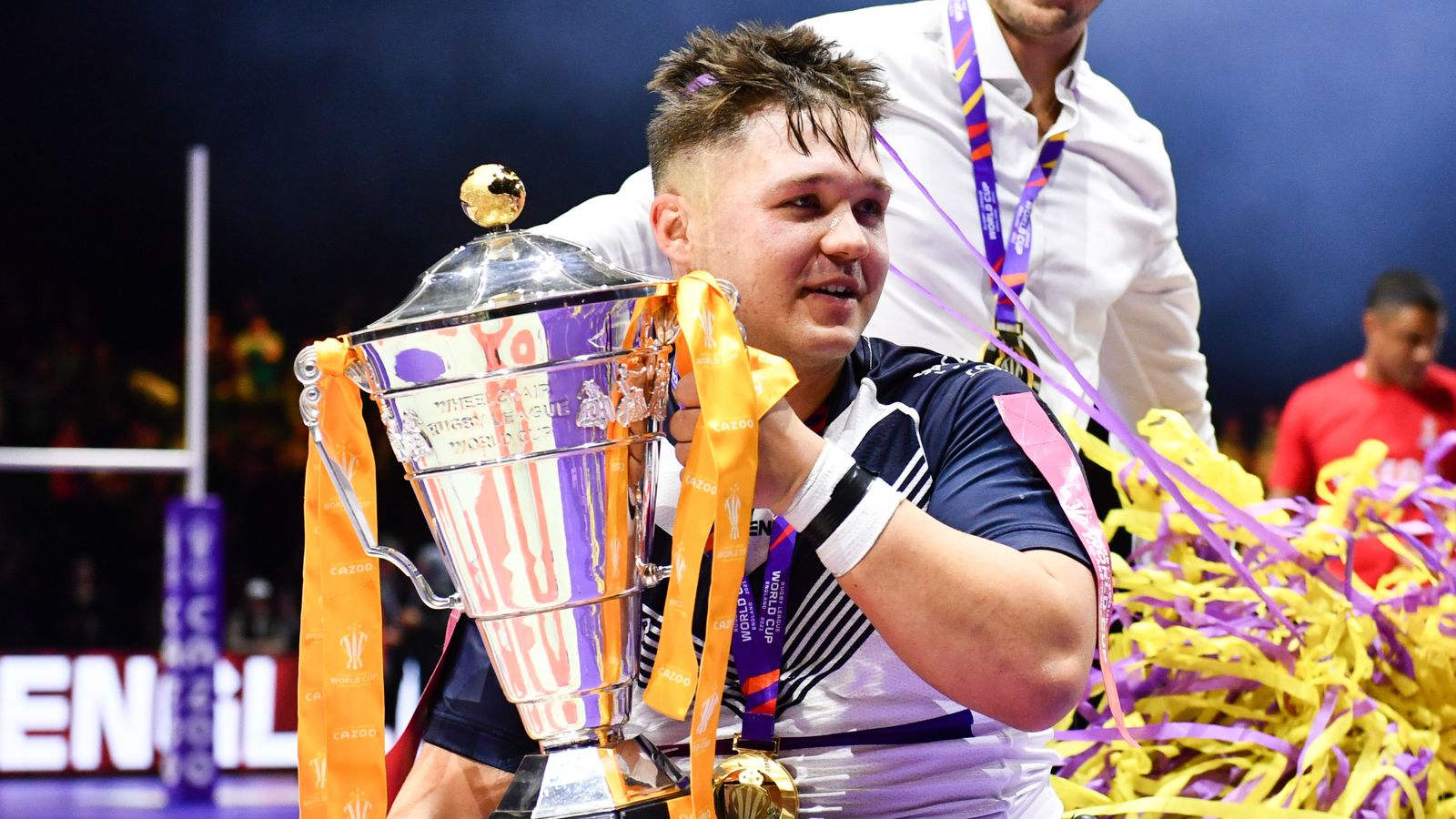 England captain Tom Halliwell, who plays for Leeds Rhinos in the Wheelchair Super League, was sent a congratulatory message by Rhinos icon Rob Burrow after playing a starring role in the final; France head coach Sylvain Crismanovich criticised a lack of showering facilities for players

By Marc Bazeley at Manchester Central

Tom Halliwell was overcome with emotion after his hero Rob Burrow congratulated him on winning the Wheelchair Rugby League World Cup.

The England captain spoke in the build-up to Friday’s 28-24 win over France in the final about how honoured he was to be wearing the No 7 shirt as Burrow had during his stellar career with Betfred Super League side Leeds Rhinos.

Burrow posted his congratulations to Halliwell, who scored the game-clinching try two minutes from time in England’s win over France, on his Twitter account after the final and the Rhinos wheelchair star was overwhelmed to generate such a reaction.

“It’s special,” Halliwell said. “My try was sort of recreating his from the [2011 Super League] Grand Final, except his was 40 metres out and mine was probably four.

“Those are such kind words and it means a lot, but I can’t rest now. I’ve still got work hard and this is just the beginning for wheelchair rugby league, and I’m happy to be a part of it.

“I’m very grateful to be a part of this sport, it’s amazing and can’t wait to see what it can grow into.

“I’m probably forever in debt to rugby league and wheelchair rugby league has given me a platform to be able to play with family and friends.”

After winning the Wheelchair Rugby League World Cup, England’s Tom Halliwell and Seb Bechara reflected on the result and atmosphere at the game against France

After winning the Wheelchair Rugby League World Cup, England’s Tom Halliwell and Seb Bechara reflected on the result and atmosphere at the game against France

England had lost the last two wheelchair World Cup finals against France, with the 2017 one seeing their rivals snatch victory with a try on the final play of the game.

This time, however, it was the host nation who won a see-saw contest in which they were 14-12 down at half-time before seizing the initiative after the break.

“I’ve learnt loads of amazing lessons along the way and probably playing France in tight games has been the biggest lesson, so thanks to them,” England head coach Tom Coyd said.

“I said ‘believe in yourselves’ [at half-time] because I thought we were playing within ourselves. Our defence was so solid, we were just a little bit scared of making a mistake. I said to them believe in themselves and they went out and did that.”

Attention will soon turn to the next Rugby League World Cup in France in just three years’ time, with the aim being to build on the exposure the wheelchair version of the sport has enjoyed being played alongside the men’s and women’s running game competitions.

Halliwell is optimistic it is only going to keep growing in the build-up to the 2025 tournament, but for now, just wants to enjoy the moment of skippering England to glory on the sport’s biggest stage.

“It’s probably the best feeling in the world, lifting it with these players and staff,” Halliwell said.

“We’ve been working so hard for the past five years to be able to get to this point and it’s so good knowing all this hard work has paid off.”

The wheelchair World Cup has been widely acclaimed for elevating the sport to a new level and for its inclusiveness, with the sport allowing male and female disabled and non-disabled athletes to compete on an even playing field.

But while France head coach Sylvain Crismanovich felt the action on the pitch brought many positives over the past three weeks, he believes there was still some areas behind the scenes where work needs to be done.

Crismanovich was particularly upset about the lack of showering facilities for the players at the venue for the final, Manchester Central.

“There has been no discrimination between teams, but tonight we haven’t got any showers.

“All of the players played, but had no showering facilities and I don’t think the women or the men would have stood to have that.”

On the game itself, Crismanovich felt the outcome could have gone either way.