EU and Turkey call for concrete actions to improve relations 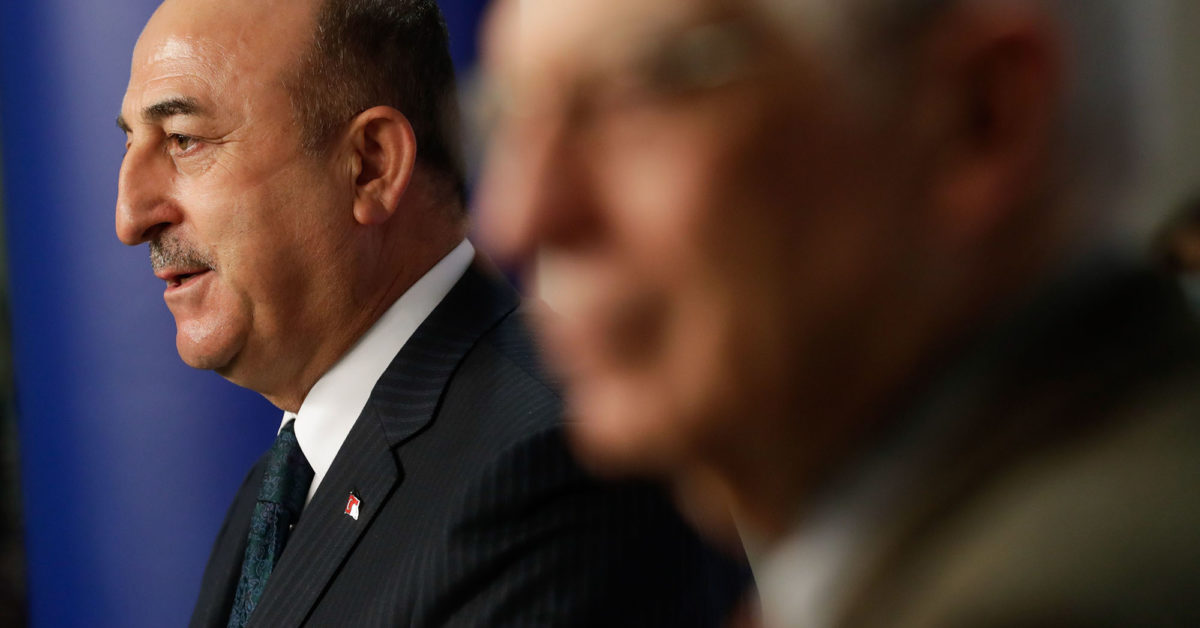 Turkey and the EU signalled a slight brightening of relations on Thursday, after a year of tensions that had left Brussels pondering new sanctions.

The hint of a thaw came at a meeting between Josep Borrell, the EUâ€™s foreign policy chief, and Turkish Foreign Minister MevlÃ¼t Ã‡avuÅŸoÄŸlu, and just a day after President Joe Biden took office in the United States.

In brief statements to reporters, Borrell and Ã‡avuÅŸoÄŸlu called for action to build on the recent improvements.

â€œLast year has been a complicated year for these relations,â€ Borrell said, standing alongside Ã‡avuÅŸoÄŸlu at the headquarters of the EU External Action Service. â€œRecently, we have seen, from both parts, an improvement in the overall atmosphere and some important steps.â€

Borrell, in particular, noted the the announced resumption of direct exploratory talks between Turkey and Greece, which are aimed at reducing longstanding regional tensions betwen the neighbors. Borrell stressed that â€œintentions and announcements need to be translated into actions.â€

Borrell also mentioned efforts by U.N. Secretary-General AntÃ³nio Guterres to resume negotiations over the future of Cyprus. â€œWe strongly wish to see a sustainable deescalation in the Eastern Mediterranean, but in the wider region also,â€ Borrell said. He also nodded to the â€œprospects of adhesionâ€ â€”Â a reminder that Turkey formally remains a candidate country for EU membership, though negotiations are effectively frozen and its hopes of ever joining the bloc darkened amid the recent tensions.

In the livestream of his statements to the press, Borrell didnâ€™t explicitly mention any concern about human rights, but the point was later added to the official transcript.

Tensions had run high for numerous reasons, but especially because of unauthorized TurkishÂ drillingÂ for natural gas in the EasternÂ Mediterranean. As a result, EU leaders unanimouslyÂ agreedÂ in December to add more names to a sanctions list that currently targets twoÂ top managers at the Turkish Petroleum Corporation (TPAO).

In recent weeks, however, Turkish President Recep TayyipÂ ErdoÄŸanÂ launched a charm offensive, including by reaching out to Athens and Paris. Some analysts linked ErdoÄŸanâ€™s shift to the looming change of administration in Washington. Others said the EU had succeeded in striking the right balance between carrots and sticks â€” by threatening new sanctions in December but also keeping a door open to reengage with Turkey.

Standing with Borrell, the Turkish minister said that last year was â€œproblematicâ€ in terms of bilateral relations, but that recently â€œboth sides have expressed will in order to create a positive atmosphere.â€

ErdoÄŸan has invited Michel and Commission President Ursula von der Leyen to visit Turkey and Ã‡avuÅŸoÄŸlu said that he and Borrell â€œare going to work on the preparation of these visits.â€

Ã‡avuÅŸoÄŸlu cited the â€œneed of concrete steps by both sidesâ€ saying that talks would focus on migration, the preparation of a multilateral conference on the Eastern Mediterranean; Turkeyâ€™s desire for visa-free travel to the EU for its citizens, an enhances of the EU-Turkish customs union.