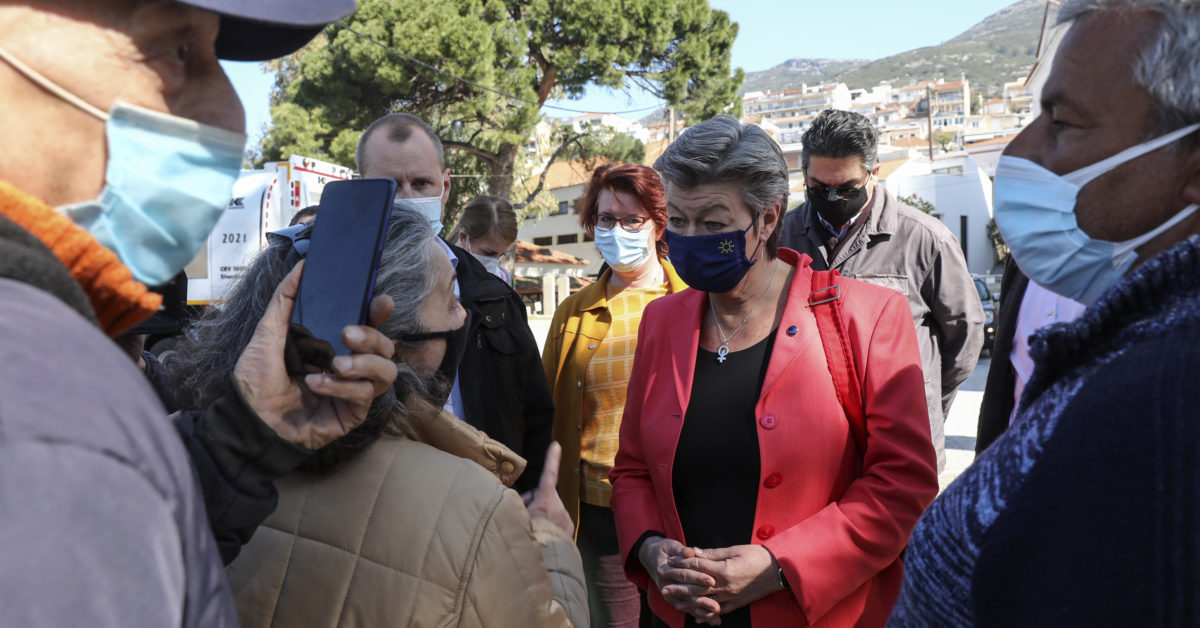 Instead, the local governor shunned Johansson, joining forces with hundreds of protesters who were demanding she stop the exact project she was there to advance.Â

Johansson is currently on a two-day visit to Greece to inspect progress in building new migrant camps on the islands of Lesvos and Samos, a â‚¬250-million effort the EU undertook after a previous migrant facility on Lesvos burned down last fall.

But during her appearance on the island of Lesbos on Monday, Johansson was met by hundreds of angry local residents, who gathered outside the building where she was set to meet with mayors, North Aegean Regional Governor Kostas Moutzouris and Greek Migration Minister Notis Mitarachi.

The protesters held banners proclaiming, â€œno to structures on the island.â€ And they chanted: â€œNeither in Lesvos, nor anywhere, we will not turn Greek islands into prisons.â€

Around noon, Moutzouris came out of the regional authoritiesâ€™ building to wave to the crowd, and announce that he had called off the meeting. He expressed certainty the camps would not be built. It was a big applause line.

The regional governor said he decided to cancel his meeting after reading a blog post Johansson published Friday, detailing her reasons for visiting Lesvos. In it, Johansson argued that now â€” with facilities less crowded and the weather warming â€” was the moment to improve processing and camp areas. According to U.N. data, migration flows to Greece dropped dramatically last year, with just over 16,000 people arriving in the country.Â

â€œIt is clear that she is not taking into account the local population and was here to discuss already received decisions,â€ he said.

Moutzouris said he was originally planning to meet Johansson and even got her a gift, a wood carving of an olive branch â€” the traditional symbol of peace. But Moutzouris said he found out on Saturday that his meeting with Johansson would include more than five people and was scheduled to only last half an hour. He called it â€œa pretentious meeting,â€ and said he sent a protest letter on Sunday to the commissionerâ€™s office.Â

Moutzouris also latched onto Johanssonâ€™s insistence that the new migrant camps would be â€œopenâ€ facilities, a contentious issue in Greece, where there has been a push by the government and local authorities in recent years to shutter overcrowded camps and replace them with â€œclosedâ€ detention centers.Â Â

â€œThis blog was honest and Johansson said the things the way she sees them,â€ Moutzouris said. â€œShe clearly talks about open reception centers [in her blog], while up until that moment we were told these would be closed facilities.â€

In a press conference with Mitarachi, the Greek migration minister, Johansson stood by her position. The new camps, she said, â€œare not going to be closed, because we do not detain people for being migrants.â€Â

She did note though there would be a controlled exit system for those who arenâ€™t allowed to stay in Europe.

â€œEven if you donâ€™t have the right to stay in the European Union, you are a human being, you have rights, you have dignity,â€ Johansson said.

She said the new camp in Lesvos that would replace the infamous Moria facility that burned down last September would be ready on time and people will not have to spend another winter in tents. However, the construction has not even started yet, seven months after the fire. Mitarachi said work will probably start in the summer.

Johansson also reiterated her concerns about reports that the Greek coast guard was occasionally turning away migrants. The Greek authorities, she said, â€œcan do moreâ€ to investigate these alleged pushbacks.

â€œWe need to protect our external borders and we need fundamental rights and this goes hand-in-hand, itâ€™s not a contradiction,â€ she said.Â

The United Nations Refugee Agency has received a growing number of reports in recent months suggesting asylum seekers may have been turned away or sent back to Turkey immediately after reaching Greek soil. There have also been reports of Greek authorities leaving some migrants adrift at sea.

Mitarachi once again strongly denied that the Greek coast guard has been involved in pushbacks. But, he added, â€œcountries have borders and there are rules and regulations [about] how the competent authorities must exercise and execute their constitutional obligations to protect them.â€