EU conservatives under fire over soft line on Slovenian PM 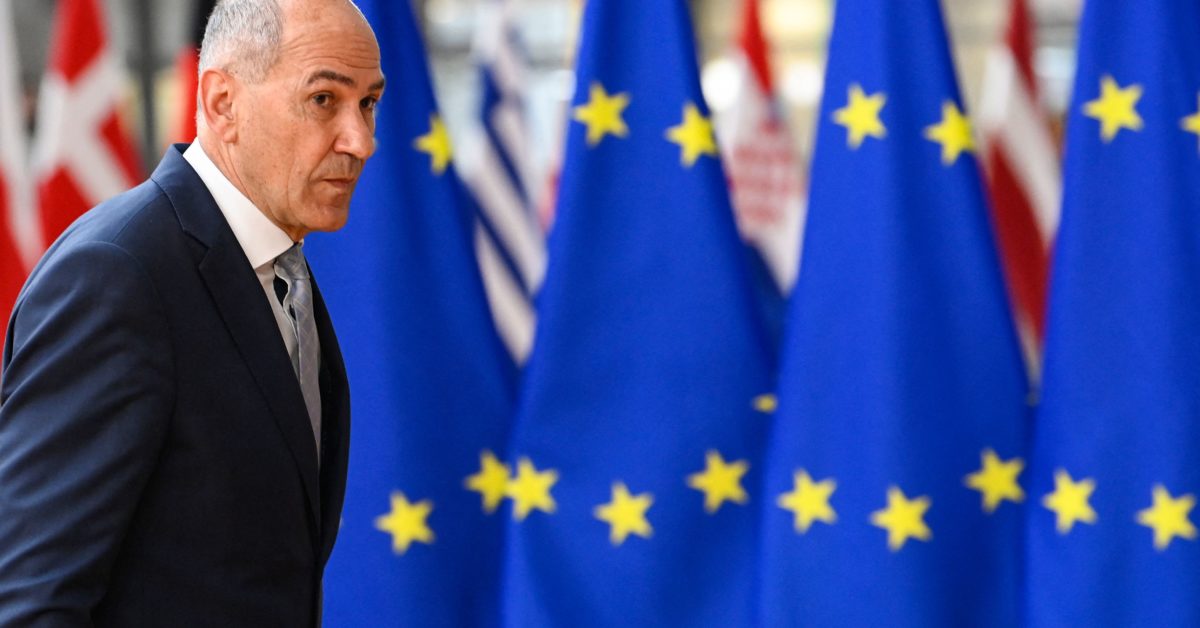 Europeâ€™s conservatives donâ€™t see Slovenian Prime Minister Janez JanÅ¡a as a problem. Their opponents say thatâ€™s a problem in itself.

JanÅ¡a will be in the spotlight over the next six months as his government presides over the Council of the EU. But he has already made many international headlines since starting a third stint as prime minister last year, facing widespread accusations of curbing media freedom, undermining the work of EU prosecutors, weakening courts and independent watchdogs, and waging a â€œculture warâ€ over museums.

JanÅ¡a is also a staunch supporter of former U.S. President Donald Trump, and a prolific user of Twitter, earning the nickname â€œMarshal Tweetoâ€ â€” a play on Marshal Josip Broz Tito, the longtime leader of communist Yugoslavia, of which Slovenia was once a part. JanÅ¡a has used the social media platform to retweet unsubstantiated conspiracy theories about voter fraud in the last U.S. election, to predict Joe Biden would be â€œone of the weakest presidents in historyâ€ and to personally attack journalists, critics and opponents.

None of this has elicited much in the way of expressions of concern from the European Peopleâ€™s Party (EPP), the Continentâ€™s main alliance of conservative and center-right parties that includes Germanyâ€™s Christian Democrats, Franceâ€™s Les RÃ©publicains, as well as JanÅ¡aâ€™s own Slovenian Democratic Party (SDS).

EPP officials have brushed off concerns that JanÅ¡a is gradually turning into another version of his Hungarian counterpart and close ally, Viktor OrbÃ¡n. The EPP kept OrbÃ¡n inside its ranks for years after the European Parliament accused him of putting core EU values at risk. The EPP group in the European Parliament and OrbÃ¡nâ€™s Fidesz party finally parted ways in March this year.

EPP members of the European Parliament and other senior officials argue JanÅ¡aâ€™s Slovenia canâ€™t be compared with Hungary. They note that JanÅ¡a heads a multi-party coalition government so has nothing like the kind of power OrbÃ¡n and his party wield. They describe Slovenia as a vibrant society that does not have fundamental problems with democracy or the rule of law.

Even MEPs like Roberta Metsola, one of the fiercest defenders of the rule of law in the EPP, have adopted a cautious tone when talking about Slovenia.

â€œI have visited Slovenia and spoken to government officials and civil society there on a recent pre-presidency trip,â€ said Metsola, a Maltese MEP who is a vice president of the European Parliament. â€œThe discussions we had were excellent and frank and I know we will keep the dialogue going. There are high hopes for the presidency and while yes, there are issues that need to be tackled, I am more hopeful that they will be addressed.â€

One EPP insider described JanÅ¡a as â€œmostly a provocateur,â€ suggesting the issues with the PM did not go much beyond his rhetoric.

â€œAll the accusations from certain media, we donâ€™t have real proof of all that right now,â€ the party insider said. â€œNobody at the [European] Commission has told me they have fears about Slovenia, apart from media or political statements.â€

Such assessments stand in stark contrast to those of respected human rights organizations, international watchdogs and NGOs.

The Council of Europe, the Continentâ€™s leading human rights body, has denounced a â€œstriking deterioration in media freedom over the past year in Slovenia.â€ The most recent report on Slovenia from Freedom House, the pro-democracy and human rights NGO, said JanÅ¡a and his party â€œattempted to interfere with independent institutions.â€

Even European Commission officials expressed concern after JanÅ¡aâ€™s government canceled the nomination process for two candidates for the new European Public Prosecutorâ€™s Office (EPPO), which is tasked with cracking down on EU budget fraud.

The decision led Slovenian Justice Minister Lilijana KozloviÄ to resign. Without local prosecutors in Slovenia, officials say the EPPO will struggle to carry out investigations and bring charges in the country.Â

â€œAll the crimes that are committed after the first of June fall under the EPPO jurisdiction, we have a mandatory competence to investigate,â€ Laura CodruÈ›a KÃ¶vesi, EPPOâ€™s chief prosecutor, told POLITICOâ€™s Brussels Playbook in an interview.Â â€œThis is why I see Slovenia as a huge risk because money will continue to flow in Slovenia, but the management and control system for EU funds in Slovenia will be really, really affected.â€ She added that the â€œmanifest lack of sincere cooperation of Slovenian authorities will influence a lot the efficiency of the EPPO.â€

At a recent debate in the European Parliament, EU Justice Commissioner Didier Reynders said the Commission was â€œconcerned with the failure to nominate European delegate prosecutors in Slovenia, which raised concerns that the national procedure has not been properly followed.â€

JanÅ¡a and his supporters have dismissed the allegations against them as exaggerations or falsehoods, driven by their ideological opponents and promoted by media outlets hostile to the prime minister and his party.

In an interview with Indiaâ€™s WION TV last month, JanÅ¡a insisted he was not a Euroskeptic and declared: â€œI have been fighting for Europe and European values for a whole 30 years.â€

He rejected criticism of his countryâ€™s failure to nominate EU prosecutors, saying it should not prevent the new prosecution office from starting work. He has also pushed back against criticism of his attacks on media outlets.

But the EPPâ€™s opponents say the pan-European party is failing to learn the lessons from its experience with OrbÃ¡n and Fidesz.

â€œSDS is a Fidesz in the making,â€ said Sergey Lagodinsky, a German MEP from the Greens group. â€œThe EPP should not make the mistake it made with OrbÃ¡n and Fidesz. If they are serious about democracy and values, they should consider excluding the SDS members from Slovenia or at least freezing their membership until JanÅ¡a, his party and their news outlets have stopped its attacks on rule of law and democracy in the country.â€

Klemen GroÅ¡elj, a liberal MEP whose party is part of the Slovenian opposition, urged the EPP to â€œresolve this at once and not succumb to the same mistakes as they made with Fidesz.â€

â€œAppeasement for illiberal strongmen went way too far,â€ said GroÅ¡elj, who is a member of the centrist Renew Europe group in the European Parliament.

Tanja Fajon, a center-left MEP and a leader of Sloveniaâ€™s opposition Social Democrats, said JanÅ¡a was following the OrbÃ¡n playbook in seeking to alter his country, first by trying to reshape the media landscape.

â€œHe is, in a very defined way, changing the character of society,â€ she said.

But JanÅ¡aâ€™s allies in the EPP have played down the controversies around his government, including the furor over the nominees for the EU prosecutorâ€™s office.

Milan Zver, an MEP from JanÅ¡aâ€™s party, said in a recent speech in Parliament that there had been â€œirregularitiesâ€ in the EPPO selection procedures and that Slovenia simply wished to appoint â€œcompetentâ€ candidates.

Metsola, the Maltese MEP, also sought to take the heat out of the issue.

â€œOur hope is that the impasse with the delegated prosecutors is solved quickly and that the office can function in a truly independent manner,â€ Metsola said.

Not everyone in the EPP is so relaxed about JanÅ¡a, however. One EPP group official called him â€œcynical and moodyâ€ and suggested he may not even be part of the same political family for much longer.

The official said EPP leaders expected him to join a new Euroskeptic group that may be formed by OrbÃ¡n and Matteo Salvini, the leader of Italyâ€™s far-right League party. â€œThey are all waiting to see what the OrbÃ¡n-Salvini crowd will do in the fall and if they form a new group,â€ the official said.