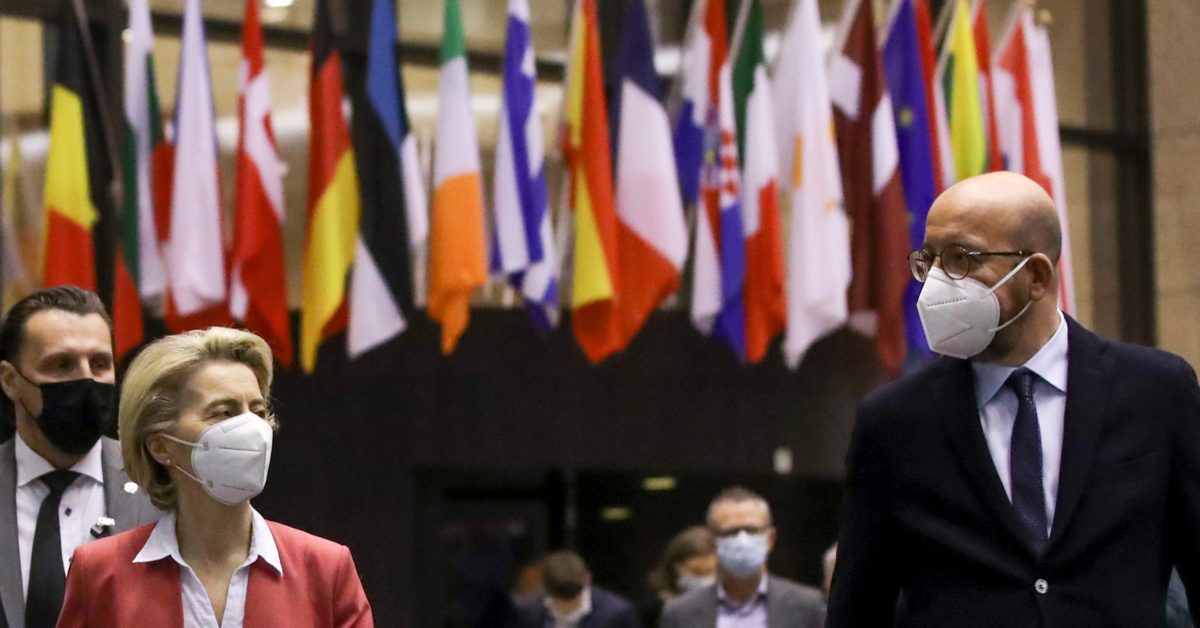 A year into the pandemic, European citizens are suffering from full-blown coronavirus fatigue, top EU leaders said Thursday,Â and the leaders themselves seem rather exhausted as their own efforts to manage the crisis repeatedly get thwarted or delayed.

After a long videoconference, EU heads of state and government said they had reached a consensus on creating a standard digital “vaccine certificate” that theoretically should help ease border restrictions and revive travel. But European Commission President Ursula von der Leyen said there are still numerous scientific, technical and political obstacles, including the inability of leaders to agree on the basic issue of what exactly the certificates will be used for.

From a technical standpoint, it will take three months to develop the new technology, von der Leyen said, and that seemed just as well given a bigger logistical problem: Even now, very few people in the EU are actually getting vaccinated, and the leaders don’t have any immediate ability to fix that.

The inability to quickly ramp up vaccinations was by far the most frustrating issue that leaders confronted during the meeting. So far, only 6.4 percent of the EU’s population has received a vaccine, von der Leyen said at a news conference â€”Â or 8 percent if children and teenagers are excluded, she added, in a rather unsuccessful effort to stretch the statistic as far as it might go.

All in all, leaders acknowledged a rather bleak situation over which they have extremely limited control.

“I think we have to face the truth that there is indeed a difficult situation,” European Council President Charles Michel said at a news conference following the tele-summit. “There is considerable pressure in all our member states and our people have great expectations of us, that they will be able to recover an ability to live freely. And of course there is all this impact on the economy and the social situation. We know that the next few weeks will continue to be difficult as far as vaccinations are concerned.”

Vaccine production is projected to steadily increase in the next few months, but there is little that the leaders or even the manufacturers themselves can do to speed things up in the short term. New factories can’t be built overnight. Existing manufacturing facilities can’t be repurposed easily. Basic ingredients, like crucially-needed lipids, are in short supply.

So while leaders on Thursday applauded the Commission’s creation of a new task force led by Internal Market Commissioner Thierry Breton, and while they adopted a joint statement proclaiming a need to “urgently accelerate the authorisation, production and distribution of vaccines, as well as vaccination,” there was nothing concrete they could do.

“We have to go faster, much faster,” Italy’s new prime minister, Mario Draghi, told his counterparts during his first European Council as a head of government. While other leaders shared the sentiment, after another more than five-hour gabfest tele-summit, what was most clear was how little power they have over the situation.

The boiling over of frustration was also on vivid display Thursday in the European Parliament, where executives of pharmaceutical companies were subjected to blistering interrogation.

Von der Leyen warned leaders and citizens not to falter in the fight against the pandemic.

“There is a growing COVID fatigue among our citizens,” she said at the news conference with Michel. “It has been a very trying year but we should not let up now. Not only does the situation remain serious in many parts of Europe, but we must also watch out for the variants that are spreading.”

She said the U.K. variant was now widespread, detected in all but one EU country, that the South African variant has been detected in 14 countries and the Brazilian variant in seven. “So there is a lot of challenge ahead of us,” von der Leyen said.

In a bid to ease frustration and demonstrate the Commission is doing its utmost, von der Leyen showed the 27 national leaders a map of 41 sites across the EU that are involved in vaccine production, and she said more had been identified that could join the effort. But exactly how that would happen, or what they would do, was not immediately clear.

Last month, Michel raised the possibility of using emergency powers in the EU treaties to force vaccine makers to share patents or other licenses of intellectual property. But at Thursday’s news conference von der Leyen said that strong-arming companies would not work and that cooperation among manufacturers would have to be “voluntary.”

Some countries, like the Czech Republic, are still facing the brunt of a brutal second wave of infections and have pleaded with other EU countries to “lend” initial supplies of vaccines. Some leaders brought up those requests but no decision was reached, one national official said, noting that the lack of vaccine supplies is a problem for everyone.

The slow vaccine rollout is far from the only problem.

Last month, the EU leaders agreed to coordinate on restricting nonessential travel â€” only for some countries, including Germany, to impose severe border measures unilaterally, citing fears over the spread of new virus variants.

“When it comes to travel, we need to respect the common approach we agreed,” Michel said. “Non-essential travel may still need to be restricted, but measures must be proportionate.”

But none other than German Chancellor Angela Merkel defended Berlin’s move, which she insisted had not interfered with commerce despite long queues of trucks at border crossings and reports that even essential travel was being heavily disrupted.

â€œI have explained for Germany that in certain cases, and we are not the only ones, we are forced to introduce certain restrictions â€” if there are either high incidence areas or mutation areas â€” but that we will do everything we can to make the free movement of goods possible and also to let the commuters work,” Merkel said at a post-summit news conference. “But that, of course, requires additional safeguards such as testing.”

During the videoconference, Merkel did not directly address complaints from neighboring countries, according to officials who heard her remarks.

French President Emmanuel Macron stressed that he would not tolerate the new vaccine certificates being used in ways that penalize young people who have not received the vaccine.

“I will not accept a system that conditions access to this or that country on a certificate. Our young people won’t have been vaccinated by end of June, beginning ofÂ July,” he said.

For Greek Prime Minister Kyriakos Mitsotakis, and other leaders of countries heavily reliant on tourism, the bigger worry is that the new vaccine certificates won’t be ready in time for the summer holiday season. On the teleconference, Mitsotakis had urged leaders to reach quick decisions, noting that if government is slow to develop a system, private technology companies would fill the gap.

Von der Leyen was careful not to overpromise.

“This takes a while,” she said of the effort to develop vaccine certificates. “This takes at least around three months. That is important so expectations are not too early, too high.”

One EU diplomat said the problem in managing the pandemic was not exhaustion, but rather that leaders had so few options for solving so many difficult problems. “More than COVID fatigue,” the diplomat said. “It seems [to be] a COVID trap.â€