EU leaders tell ErdoÄŸan: Weâ€™ll cooperate â€”Â if you do, too 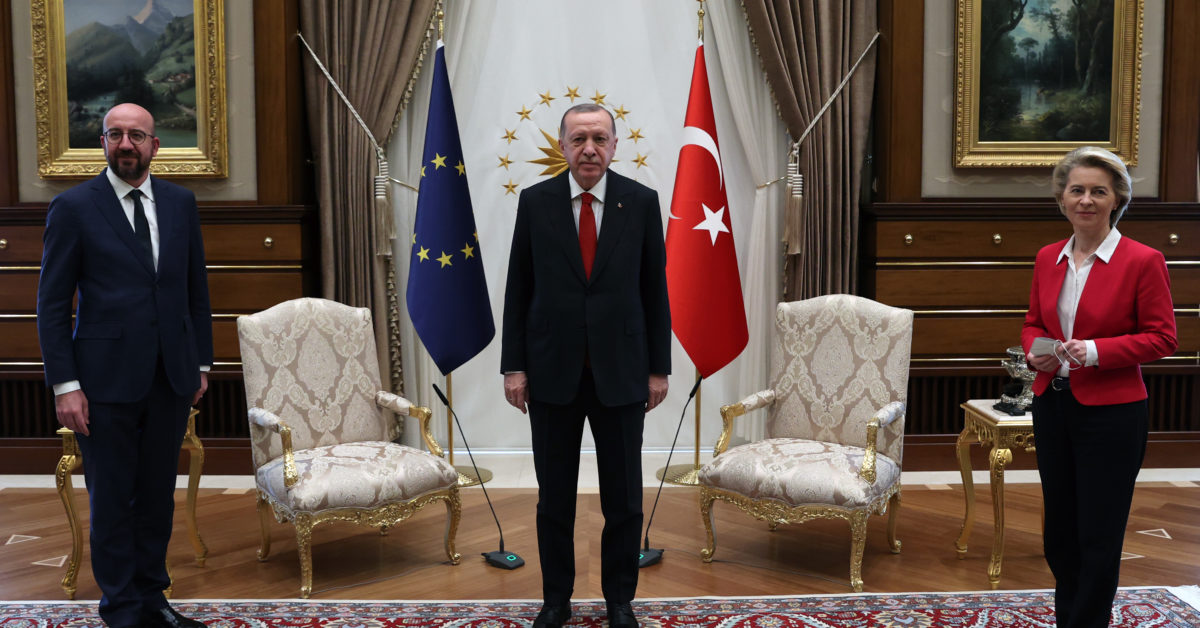 The EU has taken the first step, now Turkey has to reciprocate.

That was the message two of the EUâ€™s top leaders conveyed to Turkish President Recep Tayyip ErdoÄŸan during a meeting in Ankara on Tuesday.

During the meeting, Michel and von der Leyen detailed for ErdoÄŸan the recent decision â€”Â made at last monthâ€™s EU leadersâ€™ summit â€”Â to resume cooperation with Turkey on a variety of matters. The move came as tensions with Ankara have decreased after peaking last year over Turkeyâ€™s provocative actions against EU members Cyprus and Greece.

â€œIn recent months, we have witnessed a de-escalation,â€ Michel said during a press conference with von der Leyen after the meeting. â€œWe have told President ErdoÄŸan that the EU is ready to put a concrete and positive agenda on the table, based on three pillars: economic cooperation, migration and people-to-people contacts and mobility.â€

He added: â€œWe hope that Turkey will seize this window of opportunity.â€

After the meeting, technical experts joined the leaders for a lunch, officials said. Both sides described a good atmosphere throughout the summit.

Still, the encounter was not without its awkward moments. When the three leaders gathered for the ceremonial photo-op upon arrival, there were only two chairs placed in front of the Turkey and EU flags. The setup left von der Leyen looking slightly perplexed once Michel took the seat designated for the EU side. She ended up relegated to a nearby couch.

At her press conference with Michel, however, von der Leyen sent a positive message.

â€œWe want to move forward towards much better relations in the future,â€ she said, while cautioning, â€œwe are at the beginning of this road and the weeks and months ahead will show how far we can go.â€

The get-together was the first attempt to start implementing a goal EU leaders set at their March meeting: Reengage with Turkey.

At that gathering, among other things, EU leaders asked the Commission â€œto intensify talksâ€ with Turkey to address difficulties in the implementation of the European customs union while inviting the Council to work on a mandate for its modernization. In a statement, leaders said the reengagement should unfold in a â€œphased, proportionate and reversible manner.â€

EU leaders also asked the Commission to research new funding methods for a migration deal the bloc struck with Turkey five years ago. The deal, initially backed by â‚¬6 billion, significantly reduced the arrival of refugees on the Greek islands. But the money has started to run dry and needs to be replenished, especially with Ankara still hosting about 4 million Syrian refugees.

While tensions between the EU and Turkey have eased, the bloc remains worried by what one senior EU diplomat described as ErdoÄŸanâ€™s â€œerratic behavior.â€

The March agreement to work with Turkey â€œis fragile,â€ the diplomat argued, and additional sanctions remain an option if Turkey resumes some of its aggressive behavior.

â€œIf he continues, then it gets complicated to have the unanimity to go aheadâ€ with the cooperation plan, the diplomat said.

Turkey angered EU members last year in many ways, including when it escalated long-running territorial disputes with Cyprus and Greece. In August and October, Turkey deployed a seismic research vessel near the Greek island of Kastellorizo, pushing the two NATO allies to the brink of a possible clash.

And just a few days ago, Turkish Energy Minister Fatih DÃ¶nmez said Ankara will soon resume its seismic and drilling activities in the Eastern Mediterranean. But EU diplomats stress that Ankara hasnâ€™t said where, exactly, the drilling will take place. Some diplomats insist they are relatively confident Turkey wonâ€™t resume hostile actions against Greece or Cyprus ahead of the next meeting of EU leaders in June â€”Â when the relationship with Ankara will again be on the table.

Turkey remains a candidate country for accession to the EU, but its bid is hampered by mounting concerns over its lack of respect for human rights, judicial independence and press freedom.

In a recent report from the Commission and the European External Action Service, the blocâ€™s diplomatic body, Ankara was criticized for its â€œmajor backsliding on reformsâ€ in areas like the rule of law. And at the end of last month, ErdoÄŸan withdrew his country from an international treaty to protect women, the Istanbul Convention.

Von der Leyen and Michel said they raised these issues with ErdoÄŸan during their meeting.