EU slams AstraZeneca but fails in push for vaccine 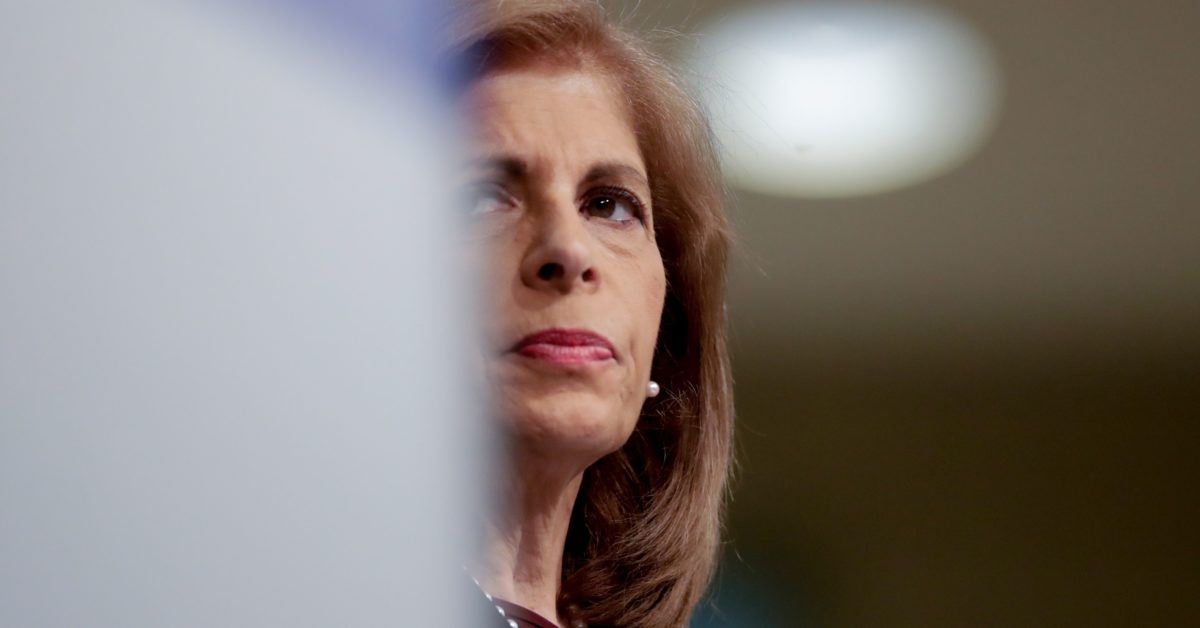 EU officials lashed out at the pharmaceutical firm AstraZeneca on Wednesday but failed to secure commitments to address a â€œmassiveâ€ shortfall in coronavirus vaccine production that will leave the bloc at least some 75 million doses short of expectations in the first three months of 2021.

â€œWe regret the continued lack of clarity on the delivery schedule and request a clear plan from AstraZeneca for the fast delivery of the quantity of vaccines that we reserved for Q1,â€ the EU health commissioner, Stella Kyriakides, tweeted after a meeting Wednesday evening that included an unexpected appearance by the AstraZeneca CEO Pascal Soriot.Â

Kyriakides insisted the European Commission would work with the company â€œto find solutions and deliver vaccines rapidly for EU citizens.â€ But the assurance seemed rather hollow after a day in which the EU threatened legal action, brandished the prospect of vaccine export restrictions and blasted Soriot and his company for failing to live up to their â€œcontractual, societal and moral obligationsâ€ â€” only to emerge from the meeting empty-handed.Â

The failure to win any concrete redress from the company was certain to heighten political tensions across the EUâ€™s 27 member countries, with the coronavirus pandemic still raging and political leaders under increasing pressure to explain why the EU has lagged behind countries like Israel, the United States and especially the U.K. in deploying vaccines to citizens.

Tensions are running particularly high over the situation in the U.K., where AstraZeneca is based and where the company is now manufacturing its vaccine at two factories that appear to be operating at full tilt. The U.K. is currently receiving all of its expected deliveries from those plants after initial hiccups that last month had the company shipping vaccines to Britain that were manufactured at factories in the Netherlands and Germany.Â

In a stunningÂ la Repubblica interview on Tuesday, Soriot blamed the EU for being three months slower than the U.K. in finalizing its purchase agreements for the vaccine, which AstraZeneca developed jointly with Oxford University, and said the U.K. government rightly expected that all vaccine doses produced within its borders would remain there for the foreseeable future.Â

At a news conference earlier on Wednesday, Kyriakides flatly accused AstraZeneca of breaching its contractual obligations, and demanded the company do whatever necessary, including redirecting supplies from the U.K. factories to make up the shortfall on the Continent. She also insisted Britain had no priority claim to vaccines manufactured on its territory.Â

â€œNot being able to ensure manufacturing capacity is against the letter and the spirit of our agreement,â€ Kyriakides said, adding: â€œWe regret the logic of first come, first served. That may work at the neighborhood butchers but not in contracts and not in our advance purchase agreements.â€Â

Queried about the EU’s pressure on AstraZeneca, Johnson said: â€œThe Oxford/AstraZeneca vaccine is obviously very important for our country and for the world. The matter in question is for our friends in the EU and AstraZeneca.â€

Despite Soriotâ€™s criticism that the EU had been late to commit to purchasing his companyâ€™s vaccine, in fact, four EU countries had reached a deal with AstraZeneca last June, shortly after the U.K. signed its initial contract in May.Â

But the details mattered little as it became clear the EU had little leverage over the company despite having allocated â‚¬336 million to help it develop the vaccine and prepare to produce it in mass quantities, even before receiving formal approval from the European Medicines Agency, which is expected on Friday.Â

The Commission has yet to disburse the entire â‚¬336 million â€”Â thereâ€™s still a â€œgood chunkâ€ of it left, one EU official said, â€œnot just a few cents.â€ Another Commission official said the Commission will â€œchaseâ€ the company to get a refund.Â

But withholding or getting money back will prove no consolation, given that what EU heads of state and government need â€”Â and what their citizens are demanding â€”Â is vaccine.

And on that front, there seemed to be little Brussels could do to immediately secure more doses.Â

Meanwhile, in the European Parliament, health committee chair Pascal Canfin plans to drag CEOs from AstraZeneca, Pfizer and Moderna in for a hearing.

While the EU is planning to impose new export controls â€”Â initially with the goal of ascertaining exactly how much vaccine is being produced and where manufacturers plan to send it â€”Â taking too tough a line on that front could backfire.Â

Already leaders from other parts of the world, such as South African President Cyril Ramaphosa, are accusing the EU and wealthier countries of hoarding vaccine and denying access to developing nations. And there are other EU partners and allies, including fellow G7 member Canada, which are relying at least partly on EU vaccine production for their supplies.

Far from being strong-armed, AstraZeneca merely reiterated its plan to deliver vaccine as quickly as possible. The company, which has production facilities worldwide, also expressed no concerns about the potential export restrictions.Â

â€œOur CEO Pascal Soriot was pleased to participate in a meeting with the EUâ€™s Vaccine Steering Board this evening,â€ a company spokesman said in a statement Wednesday evening. â€œWe had a constructive and open conversation about the complexities of scaling up production of our vaccine, and the challenges we have encountered. We have committed to even closer coordination to jointly chart a path for the delivery of our vaccine over the coming months as we continue our efforts to bring this vaccine to millions of Europeans at no profit during the pandemic.â€Â

Soriotâ€™s participation in the meeting also indicated the companyâ€™s relative confidence, despite the barrage of criticism from Brussels over comments Soriot made in his newspaper interview.Â

AstraZeneca had told the Commission on Tuesday via email that it would not attend the Steering Board meeting as it had no new information to share. Later, the company reversed course and said its executive vice president responsible for Europe and Canada would attend.

AstraZenecaâ€™s even-keeled statement was a stark contrast from the heated rhetoric coming from the Commission press room on Wednesday, where hundreds of journalists tuned in for a series of news conferences and technical briefings overwhelmingly focused on the vaccine dispute.Â

At her news conference, Kyriakides tried to take a tough line. â€œLet me be crystal clear,â€ she said, â€œthe 27 European Union member states are united that AstraZeneca needs to deliver on its commitments in our agreements. We are in a pandemic. We lose people every day. These are not numbers and they are not statistics. These are persons with families, with friends and colleagues that are all affected as well. Pharmaceutical companies, vaccine developers, have moral, societal and contractual responsibilities which they need to uphold.â€Â

And she took particular issue with Soriotâ€™s assertion that AstraZeneca was under no obligation to deliver a specific number of doses, but only to make its â€œbest effort.â€

â€œThe view that the company is not obliged to deliver because we signed a ‘best effort’ agreement is neither correct nor is it acceptable,â€ Kyriakides said.Â

She and other Commission officials insisted the EUâ€™s purchase agreements did not differentiate between the AstraZeneca plants in the U.K. and those in EU countries, and they said the Commission would never have agreed to a deal relying solely on one factory.Â

They insisted AstraZeneca had made clear commitments to Brussels while also aware of its obligations to the U.K. and dismissed the vague assertions of production problems at a factory in Belgium as an insufficient excuse for a shortfall they said would leave the EU with just 25 percent of its expected vaccine deliveries in the first quarter.Â Â

One official suggested AstraZeneca had misled the EU about its capabilities. â€œIt is only last Friday that we discovered that, you know, there was a real massive shortfall and that is really something that is not acceptable,â€ the official said.Â

As the Commission scrambled to manage the situation, it suddenly found itself shifting some long-standing positions. After months of insisting confidentiality was absolutely essential for the successful vaccine purchase contracts, the Commission said it was demanding AstraZeneca make its contract with the EU public, asserting that would disprove Soriotâ€™s claims.Â

Last week, some EU heads of state and government had expressed sharp anger at Pfizer, another vaccine maker, over a temporary production slowdown at its factory in Belgium. But on Tuesday, the Commission praised Pfizer for handling its problems better than AstraZeneca.Â

Commission officials also acknowledged they had developed their contract with AstraZeneca for vaccine production in Europe specifically to avoid the risk of export restrictions being imposed by former U.S. President Donald Trump. Only now, the Commission is moving forward with its own export restrictions.

But one senior EU official said the bloc’s main goal was actually not to focus on any such intricacies. “What we’re really, really interested in â€”Â this you need to realizeÂ â€” is not the dispute on this or that aspect,” the senior official said. “We want to have the vaccines. We want to find the solution with the company.”