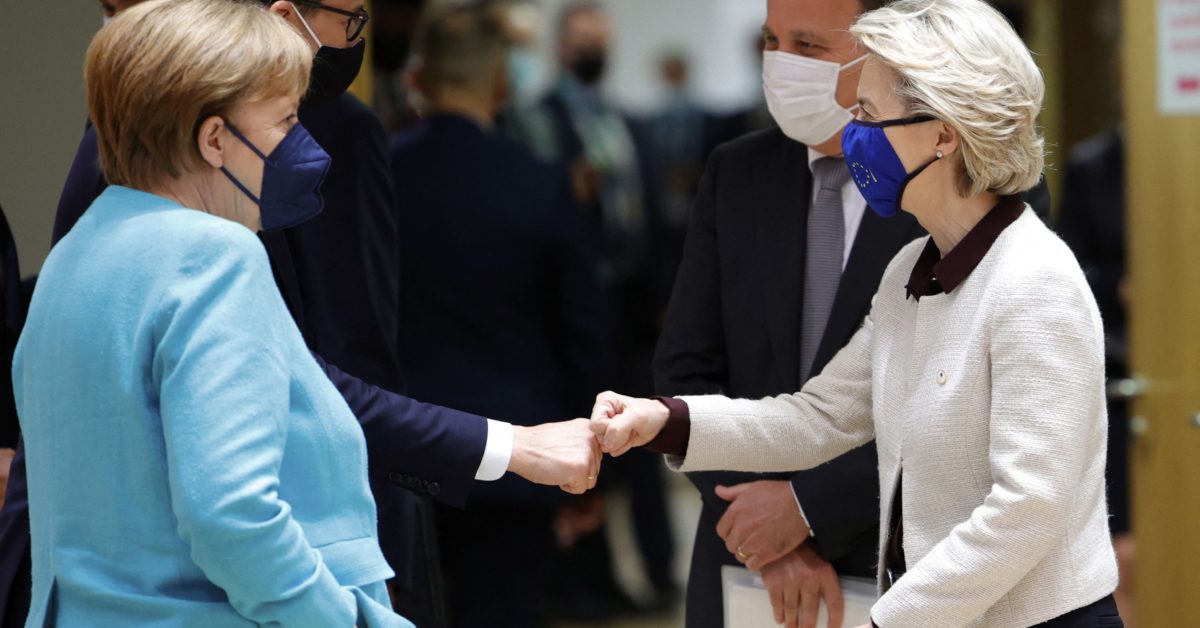 EU divisions over relations with Russia burst into public view at a European Council summit on Thursday as heads of state and government reacted with passion, dispassion and, in some cases, decided ambivalence to a late push by France and Germany to propose a summit with President Vladimir Putin while simultaneously threatening new economic sanctions.

Countries that have long favored a conciliatory approach toward the Kremlin, including some with historic economic ties and a soft spot for Russian oligarchs and their money, cheered the German-French proposal.

Leaders of Poland and of the Baltic nations of Estonia, Latvia and Lithuania, which lived for decades under Soviet repression, were aghast. In a sign of the depth of their anger, they publicly lambasted the plan by EU heavyweights, German Chancellor Angela Merkel and French President Emmanuel Macron.

â€œStarting any direct dialogue on the highest political level is only possible in a situation where thereâ€™s an actual de-escalation and actual withdrawal from the aggressive politics,â€ Polish Prime Minister Mateusz Morawiecki said as he arrived at the summit.

â€œItâ€™s an unequivocal situation for us. When we see hybrid attacks on our neighbors, on us,â€ he continued, â€œitâ€™s difficult to start a dialogue on the highest level.â€

And as if to prove that the disagreements were far deeper than a yes-no debate, Dutch Prime Minister Mark Rutte took a middle tack, saying it was fine for the EU institutions to pursue a meeting with Putin but he himself wanted nothing to do with it.

â€œI donâ€™t mind a meeting with Vladimir Putin by the two presidents,â€ Rutte said, referring to European Council President Charles Michel and European Commission President Ursula von der Leyen. But Rutte added, â€œI will not participate in a meeting with Vladimir Putin myself.â€ (The Netherlands lost 196 of its citizens in the downing of a Malaysian passenger jet over eastern Ukraine in 2014.)

The discord among EU leaders over Russia has been kept mostly under wraps in recent years, with Michel and his predecessor, Donald Tusk, working hard to avoid extensive debate when securing the periodic extension of sanctions imposed on Moscow over the 2014 invasion and annexation of Crimea.

Russia relations, however, have grown increasingly fraught in recent years amid poisonings, assassinations, cyberattacks, election meddling, and other malign activities by Russian operatives or Russia-based hackers.Â The assassination attempt and later jailing of the Russian opposition figure Alexei Navalny has also animated European leaders to be more vocal in their criticism of Moscow.

And last week Russia moved back to the center of the world stage as Putin met for a high-stakes summit with U.S. President Joe Biden in Geneva.

Several EU diplomats and officials said they believed that the German-French proposal grew out of some dismay over seeing the American leader talking about issues, including crucial security concerns, that have much more immediate impact on Europe. Merkel even seemed to acknowledge that, telling the Bundestag on Thursday morning that if Biden could meet Putin, so could the EU.

It was an odd statement for Europeâ€™s most seasoned leader, especially given that she has met and spoken to Putin repeatedly in recent years, including at particularly difficult moments.

But Merkel will retire in a matter of months and the blunt public criticism of the plan by other EU leaders suggested her sway and influence only go so far.

While ambassadors had already begun tweaking the draft summit conclusions, and leaders were expected to make further changes to the language on Russia in their discussion over dinner, the damage appeared to be done. Moscow, no doubt, had already taken note of the disarray.

Still, Macron, who was Merkelâ€™s partner in the Russia iniatitive, defended the instinct to engage more.

â€œI believe that the report that we have requested allows us to advance and start a dialogue to defend our interests as Europeans,â€ Macron said, referring to a report on Russia relations that the leadersâ€™ commissioned from the European External Action Service, the EUâ€™s foreign policy branch. â€œThis dialogue is necessary for the Continentâ€™s stability, but we shouldnâ€™t concede on our values and interests.â€

Other officials said that perhaps the most absurd aspect of the situation was the seeming jealousy of Bidenâ€™s central role in trying to shift the dynamic between Russia and the West.

To envy Washingtonâ€™s abysmal relationship with Moscow, they said, was the geopolitical equivalent of envying neighbors who have spent decades in a poisonous and abusive marriage. And in any event, they noted, the EU simply cannot compete with the U.S. as a nuclear power and as Moscowâ€™s former Cold War, superpower rival.

But there was also a sense that Berlin and Paris had grown annoyed at the mishandling of Russia relations by Brussels. In discussing relations with Russia, many officials and diplomats have referenced a disastrous visit to Moscow by the EU foreign policy chief, Josep Borrell, where he stood by and did not answer criticism from Russian Foreign Minister Sergey Lavrov.

Michel has led several Council discussions about Russia with virtually nothing to show for it all. Michel also recently had a 90-minute phone call with Putin that also yielded no breakthroughs.

EU officials had expressed gratitude that Biden dispatched a high-level State Department official, Victoria Nuland, immediately to Brussels from Geneva to brief the EU and NATO on his meeting with Putin. Given such willingness to collaborate, the officials expressed surprise and some dismay that Merkel and Macron were unwilling to wait just a bit to see if Bidenâ€™s overtures paid off, before proposing their own new outreach to the Russian leader. But despite Bidenâ€™s collaboration, German and French officials have been adamant that Europe should speak to Putin directly, not through Washington.

Lithuanian President Gitanas NausÄ—da said that the extension of any olive branch at this point by Europe would be a grave mistake, and unwarranted given Russiaâ€™s actions.

â€œSo far, we donâ€™t see any radical change in the pattern of behavior of Russia,â€ NausÄ—da said Thursday. â€œAnd in this regard, we should respect our own principles. We established five principles in dealing with Russia and if, without any positive changes in the behavior of Russia, [the EU] will start to engage, it will send very uncertain and bad signal to our partners.â€

Estonian Prime Minister Kaja Kallas expressed surprise at the sudden pivot by Berlin and Paris, and wondered aloud what had changed in the geopolitical landscape to prompt such a proposal.

â€œLast time we had a very good discussion with all of the leaders on Russia,â€ she said. â€œIt was very open and we all agreed that Russia is a big threat, they are more aggressive. I wonder what has happened now â€¦ and Iâ€™m really, really keen to listen [to] their argumentation, what has changed since last time â€” because what we have seen, Russia only goes as far as we let them, and we should be very clear [on] what is our goal.â€

Latvian Prime Minister KriÅ¡jÄnis KariÅ†Å¡ said the German-French proposal appeared to offer Russia something for nothing.

He added, â€œIâ€™m all for the dialogue, but a dialogue needs to come at a certain cost also to Russia. So right now, if it pans out the way itâ€™s proposed â€¦ Russia annexed Crimea, Russia wages war in Donbas and Europe shrugs their shoulders and continues to try to speak.â€

The U.S. has not weighed in publicly on the EUâ€™s internal dispute, but a State Department spokesperson suggested it would make sense to give Putin some time to respond to areas of potential cooperation that Biden identified during their conversation in Geneva last week.

â€œThe United States has been clear that we and our partners must be prepared to continue to impose costs when Russiaâ€™s behavior crosses boundaries that are respected by responsible nations.Â Our goal is to have a relationship with Russia that is predictable and stable,â€ the spokesperson said. â€œThere was a lot of ground covered at the June 16 Summit with Putin, but it is going to take some time to see if the areas of potential cooperation actually produce results.â€

As for the possibility of an EU-Russia summit, the spokesperson added: â€œWe would refer you to the EU and its member states.â€