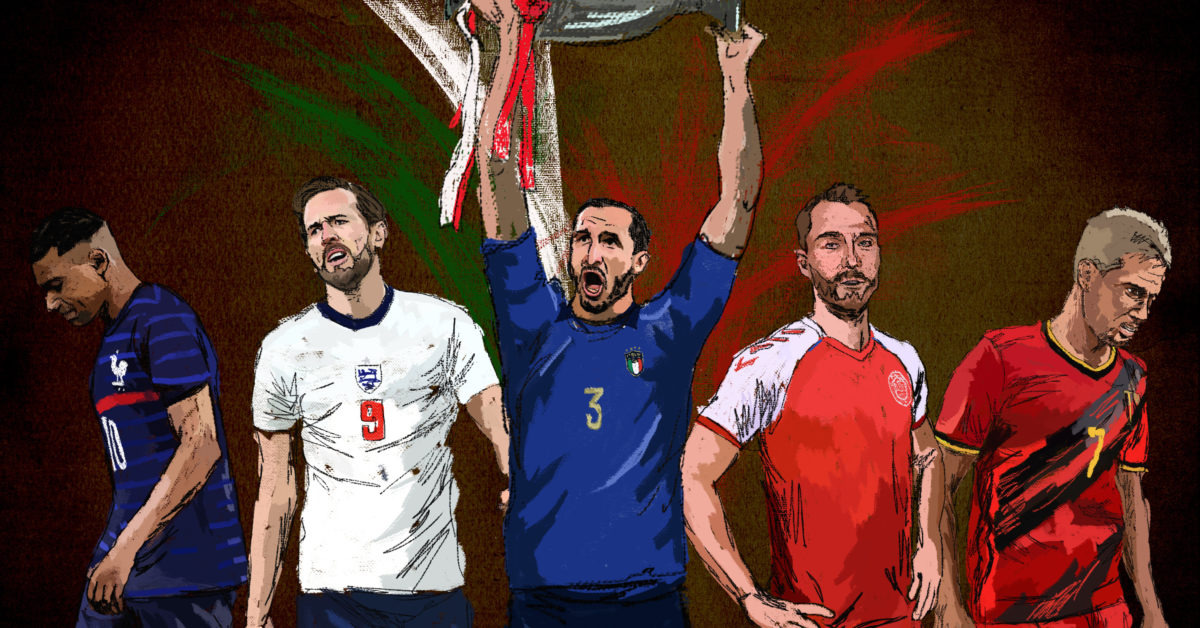 A tournament that started with legendary tenor Andrea Bocelli serenading the Stadio Olimpico in Rome, ended with Italian captain Giorgio Chiellini lifting the European Championship trophy in London after a gripping penalty shootout victory over England.

Italy, now unbeaten in 34 matches, were worthy winners of Euro 2020.

The other tournament winners were European football fans, who briefly glimpsed normality after more than a year of tight coronavirus restrictions at stadiums.Â

A is for acting. The Academy Award for best diving went to Italian forward Ciro Immobile, who was rolling around on the ground in apparent agony, before being miraculously resurrected as teammate NicolÃ² Barella lashed in Italyâ€™s opening goal against Belgium. While the Italians won hearts with a modern, attractive style of play, the moment was a reminder that theyâ€™ll never lose their taste for the dark arts.Â

B is for Baku. The Azeri capital â€” which hosted four forgettable matches â€” was one of the most controversial venues at Euro 2020, with UEFA accused in some quarters of ignoring the security situation in the country and turning a blind eye to the repression of Azerbaijanâ€™s LGBTQ+ community.Â Â

C is for Crimea. Ukraine stirred up some pre-tournament controversy with a uniform that included the outline of a map of the country â€” including the Russian-annexed Crimean peninsula. The kit, which also included the phrases â€œGlory to Ukraineâ€ and â€œGlory to our heroes,â€ caused a war of words between Kyiv and Moscow, and UEFA eventually stepped in and demanded one of the slogans be removed.Â

D is for devils. Belgiumâ€™s Diables Rouges cruised through the group stage and beat Portugal in the Last 16 â€¦ but, with an aging and hurting squad, fell flat against Italy in the quarterfinals. Though Kevin De Bruyne and Romelu Lukaku remain dangerous, all evidence suggests the Belgian golden generationâ€™s best days are behind it.Â Â

E is for Christian Eriksen. The world watched in horror during the first weekend of the competition as Danish midfielder Christian Eriksen suffered a cardiac arrest while taking on Finland. Eriksenâ€™s life was saved due to immediate attention from his teammates and medical staff. In England, lawmakers and the Football Association are working to make fully funded defibrillators available for grassroots clubs.Â Â Â Â

F is for farewell. Toni Kroos, the longtime German midfield maestro, retired from international football after England knocked Germany out of the tournament. Joachim LÃ¶w also bowed out as Germanyâ€™s national coach following the defeat at Wembley, ending a 15-year reign that included a World Cup triumph in 2014.Â

G is for Gareth Southgate.Â So close, yet so far, for Englandâ€™s composed, well-spoken manager. His decision to let two of Englandâ€™s youngest players take the last two penalties in the final shootout will be second-guessed, probably forever. But Southgate has taken his country to a World Cup semifinal in 2018 and now the European Championship final. The next step, England fans hope, will be to lift the World Cup in Qatar in 2022.

H is for hubris. France midfielder Paul Pogba possibly regrets his grandstanding celebration after putting Les Bleus 3-1 ahead against Switzerland in the Last 16. The clear tournament favorites were cruising to victory with 10 minutes left, but France was reined in by two late Swiss goals before losing on penalties. Analyzing the tournament on British radio, Roma manager JosÃ© Mourinho said: â€œWhen I saw the way they celebrated the third goal, I didnâ€™t like it. I had the feeling of, these guys are already celebrating on the Eiffel Tower, dancing here, dancing there.â€Â

I is for Italy.Â Italy opened the tournament, sweeping aside Turkey in Rome. Italy also closed the tournament, edging past England in London. Its journey to Euro 2020 glory had some tense moments â€” a narrow defeat of Austria in the Last 16; the nerve-shredding penalty shootout wins against Spain in the semis and England in the final â€” but, ultimately, there was no doubt Italy was the team of the tournament. And in giant goalkeeper Gianluigi Donnarumma, a new superstar and penalty hero was born.

J is for jackets. As well as being one of the teams of the tournament, Italy ruled the sartorial contest at Euro 2020. No one looked better on the sidelines than Italian legends Roberto Mancini, Alberico Evani and Gianluca Vialli, kitted out in their suave, gray Armani suits. The elegant fashion inspired some of the best tournament memes, too.Â

K is for kneeling. Prior to the tournament, Englandâ€™s players were booed by some of their own supporters for â€œtaking the kneeâ€ in support of racial justice. Leading Brexiteer Nigel Farage promised â€œa horrible, divisive few weeksâ€ if the kneeling continued. But manager Gareth Southgate and the players didnâ€™t back down, the pre-match kneeling went on and the football united England in a rare fashion. Southgate 1, Farage 0.Â

L is for Robert Lewandowski. Polandâ€™s top striker tried his best to drag an underwhelming Polish team through the group stage but, despite three goals in three games, including a towering header against Spain, the Poles crashed out at the first hurdle.Â

M is for Magic Monday. June 28 was one of the greatest days of tournament football â€¦ ever. Spain edged past Croatia 5-3 in a helter-skelter game in Copenhagen, before Switzerland stunned France on penalties in one of the international games of the century.Â

N is for North Macedonia. The tournamentâ€™s lowest-ranked team was embroiled in two controversies. First, Austrian Marko Arnautovic, who is of Serbian descent, screamed â€œnationalistâ€ abuse at an ethnic Albanian player from North Macedonia in the teamsâ€™ opening game. Arnautovic was banned for the next match. Then Greece waded in about a different matter, demanding that North Macedonia respect a deal between Athens and Skopje and stop using the MKD acronym on its kit â€”Â demanding an acronym with the word â€œnorth.â€

O is for oranje. The Netherlands, one of European footballâ€™s historic powerhouses, have languished in the international wilderness for years â€” and the lean times continued with a tepid 2-0 defeat to the Czech Republic in the Last 16. Dutch manager Frank de Boer headed straight for the exit, saying the pressure was â€œnot a healthy situation for me or the squad.â€Â

P is for Michel Platini. The pan-Continental Euros was the brainchild of the disgraced former UEFA president. Having multiple host cities around Europe looked like a bad idea at conception in 2012, and a much worse one in a pandemic-blighted 2021.Â

Q is for Nations League qualifiers. North Macedonia, Slovakia, Scotland and Hungary all qualified for Euro 2020 via a new route: the Nations League playoffs. None made it to the Last 16. And, with the exception of Hungary, none played particularly well. The disparity in quality doesnâ€™t bode well in case of further expansion of the European Championships.Â

R is for rainbow. A spat between the Munich City Council and UEFA over highlighting LGBTQ+ rights dominated the tournamentâ€™s second week. Munich wanted to illuminate the outside of its stadium in rainbow pride colors for the group-stage match between Germany and Hungary after Budapest passed an anti-LGBTQ+ law. UEFA denied the request and was swamped with a wave of criticism that overshadowed the final round of group games.Â Â Â Â

S is for Patrik Schick. The Czech forward was one of the surprise stars of the tournament, sharing the Golden Boot with Cristiano Ronaldo. He left Scotland fans sick after curving in a goal from the halfway line in the teamsâ€™ first tournament game.Â Â

T is for Tartan Army. Speaking of Scotland fans, tens of thousands of kilted footsoldiers invaded London for the group stage game against England. They saw Scotlandâ€™s best performance of the tournament â€” fighting the eventual runners-up to a tie. But travel to the match was later blamed for a spike in coronavirus cases.Â

U is for underperforming. France and Germany were knocked out early, but perhaps no team disappointed more than Portugal. Despite a dazzling array of world-class attacking talent and a solid defense, the Portuguese peaked in their first match against Hungary and went downhill from there. They soon exited the tournament, with a disappointing 1-0 defeat to Belgium in sweltering Seville.

V is for variant. As Scotland discovered, the Delta coronavirus strain surged in Britain during the tournament, leading some European lawmakers to call for the final matches to be removed from London. UEFA and the U.K. government resisted the demands â€” but, as typical with COVID-19, the full effect of that decision wonâ€™t be known for some weeks.Â

W is for water. H2O got a bizarre boost from Cristiano Ronaldo early in the tournament. In a viral moment, the Portuguese superstar removed two bottles of Coca-Cola from his table at a news conference and told the assembled press corps to â€œdrink water.â€ The move started a liquid craze, with Franceâ€™s Paul Pogba getting rid of bottles of Heineken at his press event; Russian coach Stanislav Cherchesov downing a bottle of Coke for the media; and Scottish midfielder John McGinn asking journalists why he didnâ€™t have any bottles of Coke on his desk.Â

X is for Granit Xhaka and Xherdan Shaqiri. The bit-part Premier League players helped inspire Switzerland to its dramatic victory over France â€” and then came close to toppling Spain in the quarterfinals in St. Petersburg, before their teammates lost their composure in a penalty shootout.Â

Y is for youth. A handful of young players lit up the tournament. Under-21s Bukayo Saka of England, JÃ©rÃ©my Doku of Belgium and Mikkel Damsgaard of Denmark were instrumental in their sidesâ€™ successes. No star shone brighter than Pedri, however. The 18-year-old Barcelona player was pivotal for Spain and invited comparisons with the legendary AndrÃ©s Iniesta.Â

Z is for zero to hero (and back again). Spain dominated Italy in the semifinal at Wembley, and recovered from 1-0 down with a well-worked goal finished off by substitute striker Alvaro Morata, whoâ€™d been criticized for profligacy early in the tournament. But his joy was short-lived. In a dramatic penalty shootout, Morataâ€™s weak strike was easily saved by Donnarumma and Spain departed for home.Â Â