Euro zone economy to shrink between 8% and 12% this year: Christine Lagarde 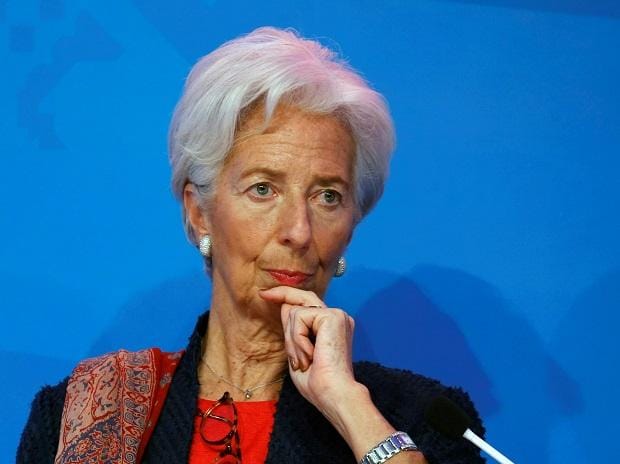 The euro zone economy is likely to shrink between 8 per cent and 12 per cent this year as it struggles to overcome the impact of the coronavirus pandemic, European Central Bank President Christine Lagarde said on Wednesday.


The ECB earlier said the economy could shrink by between 5 per cent and 12 per cent, but speaking in a youth dialogue, Lagarde said that the “mild” scenario is already outdated and the actual outcome would be between the “medium and “severe” scenarios, Reuters reported.


In another major development, the European Union’s executive proposed a 750 billion-euro ($825 billion) recovery fund to help the bloc’s economy through the deep recession induced by the coronavirus pandemic, commissioner Paolo Gentiloni said on Wednesday.


Gentiloni, who is in charge of economic affairs at the commission, wrote in a tweet that the move is a European turning point to face an unprecedented crisis.


ALSO READ: WHO deeply troubled by increasing reports of domestic violence in Europe


However, the 27-nation EU remains deeply divided over what conditions should be attached to the funds, and Wednesday’s proposal from the EU’s executive arm is likely to set off weeks of wrangling.


The move comes with the world’s biggest trading bloc set to enter its deepest-ever recession as the impact from the coronavirus ravages economies. Virtually every country has broken the EU’s deficit limit as they’ve spent to keep health care systems, businesses and jobs alive.


Earlier this month, the leaders of Germany and France historically, the two main drivers of EU integration agreed on a one-time 500 billion-euro ($543 billion) fund, a proposal that would add further cash to an arsenal of financial measures the bloc is deploying to cope with the economic fallout.


ALSO READ: European swimming championships moved to May 2021 over coronavirus


That plan would involve the EU borrowing money in financial markets to help sectors and countries that are particularly affected by the pandemic. The European Commission’s blueprint is likely to resemble the Franco-German plan in many ways while attaching the fund to the EU’s next long-term budget.


The big question will be how much money will take the form of grants and how much would be loans. Austria, Denmark, the Netherlands and Sweden a group of countries dubbed the Frugal Four for their budgetary rectitude are reluctant to see money given away without any strings attached, and their opposition to grants could hold up the project.


Will it be grants or loans? And if it will be grants, who are going to pay the grants? Loans, I think is a more interesting way forward to discuss, but we also have to discuss under what conditions shall we give these loans, Swedish Finance Minister Magdalena Andersson said on Tuesday.


Whatever its content, the commission’s plan is likely to spark heated debate and the EU does not have time for the wrangling to drag on. The new budget period begins on Jan 1, and countries across the bloc are desperate for funds now.


All 27 member countries must agree for the recovery fund to take effect.