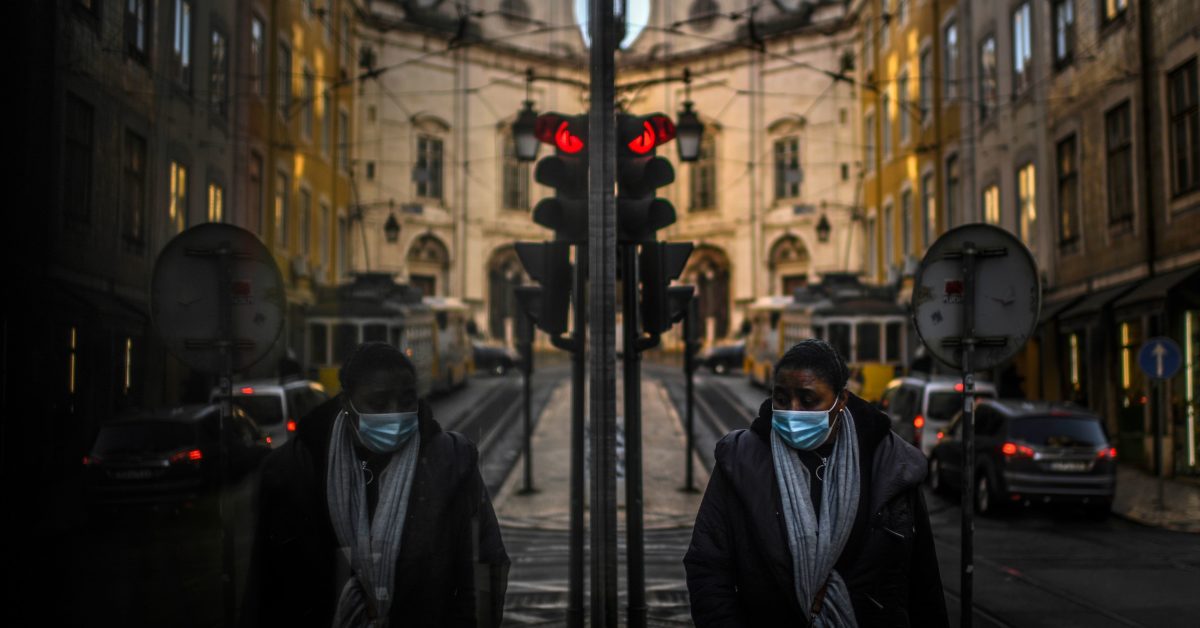 The pandemic has reached a delicate stage: With an end in sight, the number of new coronavirus infections in Europe is rising once again.

Countries are now racing against time, trying to distribute vaccines post-haste while tamping down on a flare-up in cases, driven by holiday mixing and a new virus variant, that is threatening to overwhelm hospitals again.

Ireland â€” once a poster child for pandemic management â€” is a case in point. A near-vertical spike in infections has sent Dublin scrambling, with public health officials pointing to a relaxation of restrictions ahead of the holiday season as the culprit. And while cases are tapering off slightly, hospitalizations are still on the up.

France is in a similar bind. The rapid spread of the virus, with around 18,000 new cases a day in the past week, has prompted the French government to impose a nationwide 6 p.m. curfew and tighten the country’s borders. The appearance of new variants first detected in the U.K. is one of the biggest causes for concern; at least 200 to 300 such cases are reported in France every day, according to Health Minister Olivier VÃ©ran.

Then there’s Spain, which was finally able to get its caseload under control after experiencing some of the worst numbers in Europe during the autumn. It, too, is facing a third wave.

Fernando RodrÃ­guez Artalejo, professor of preventive medicine and public health at the Universidad AutÃ³noma de Madrid, called January an especially “complicated” time for Spain. He noted the good news that the highest priority targets for vaccines â€” medical personnel and people living in care homes â€” are close to being vaccinated. But many of these people, RodrÃ­guez Artalejo explained, are the low-hanging fruit; outside centralized locations like hospitals and care homes, vaccinating the wider population will be more complex.

Something of a puzzle also remains with rising cases, he added. Socializing over the holidays has created the opportunity for more contact, but whether “this completely explains the rise is hard to know.” He thinks pandemic fatigue, with weary citizens bending the rules, may also be playing a part.

A third factor â€” the variant strain of the coronavirus rampaging throughout the U.K. â€” can be ruled out for now, said RodrÃ­guez Artalejo. So far, research efforts have only revealed a small percentage of cases in Spain resulting from this strain.

Alarm over a new variant potentially causing a surge in cases before substantial vaccinations can take place is setting in across Europe, with the scenario driving the decision in many capitals to keep lockdown measures in place â€” or tighten them still further.

Virologist Jeremy Rossman of the University of Kent said he believes there’s “a real risk” of the variant spreading both “throughout Europe and throughout the world.”

He cautions policymakers to not underestimate the threat, as the mutated virus is already present, likely even “saturated”, in many places.

This means that European countries with low numbers of the variant could see things change for the worse very quickly.

“That first tail [of the curve] is very, very slow,” Rossman said. “We found the variant in the U.K. two months before it really started to make a difference.”

It now accounts for a majority of new cases in the U.K., and evidence suggests that it’s significantly more infectious.

If the variant produces a sudden surge elsewhere in Europe, it would “make everything weâ€™ve been doing more difficult.” This is especially true if countries don’t take very strong measures to stop the spread of infections. “Unfortunately,” said Rossman, “many are not.”

Although it’s not yet certain, experts think that vaccines do work against the more infectious variant of the virus. But even then, it’ll take some time before the jab can make a difference.

“There’s a lot of optimism out there, especially expressed by politicians, for how the vaccines can enable us to to go back to normal,” said Sebastian Funk, professor of infectious disease dynamics at the London School of Hygiene & Tropical Medicine. “But a cautious approach is really warranted.”

The academic pointed to the large number of people still needing to be vaccinated. The U.K., for example, is vaccinating over-80s â€” a group that actually contributes “very little” to the burden on hospitals despite being extremely vulnerable.

“At least until the summer, vaccines are not going to make an awful lot of difference,” said Funk, pointing to “huge” challenges ranging from logistical problems â€” such as getting enough supply up and running â€” to dealing with vaccine skepticism.

Flavio Toxvaerd, an academic at the University of Cambridge, explains that it becomes all the more important for people to avoid contracting coronavirus as vaccination picks up.

He compared the pandemic response to a race: A stumble at the start of a marathon is unfortunate, but falling two meters before the finish line is even worse.

“Everyone who dies now, you could have saved, but you didn’t manage to protect,” Toxvaerd said.

He added that health authorities should do everything they can to make sure that people stay healthy to get the most benefit possible from a jab: “Rather than take the vaccine’s arrival as a license to let down your guard, you should actually redouble your efforts.”

There are signs that authorities are listening â€” in the U.K., at least. The country’s capital is under strict lockdown, while its police signalling that they are taking any rule breaking seriously.

A more hard-nosed approach to enforcement is long overdue, said Toxvaerd, who praises what he sees as “a new seriousness about policy.”

Not everyone agrees. Rosanna Tarricone, a professor and health policy expert at Bocconi University in Milan, cites growing inequalities caused by lockdowns â€” most acutely felt in the area of schooling, where children without adequate resources are at risk of falling behind.

But if countries fail to contain the spread, they could find themselves in the strange situation that the U.K. is in. As the vaccination roll-out goes into full swing, the country battling an increase in infections that threatens to overwhelm the country’s health service.

Last week, it recorded the most COVID-related deaths in one day since the start of the pandemic.

This article has been updated with more recent data.