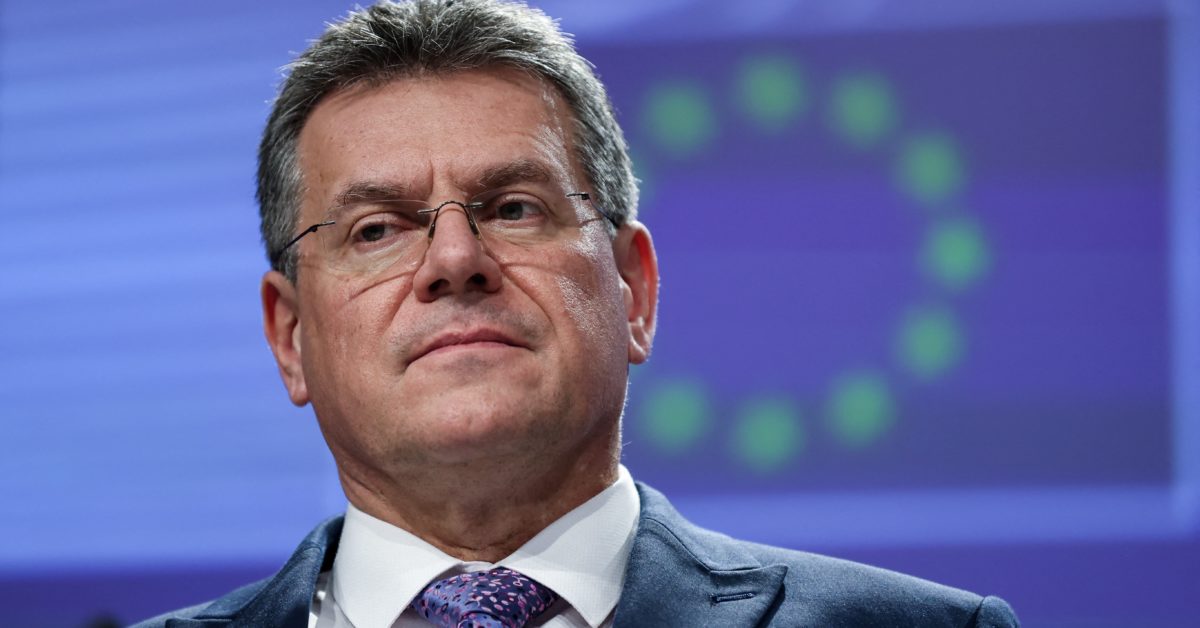 In an interview published Tuesday, Å efÄoviÄ, the European Commissioner overseeing talks with the U.K. and Switzerland, warned that a British decision to activate Article 16 of the Northern Ireland Protocol would have “serious consequences” for Northern Ireland’s economy, endanger peace in the region and constitute an “enormous setback” for EU-U.K. relations.

Article 16 allows either party to the deal to take unilateral “safeguard” measures like the suspension of trade checks between Britain and Northern Ireland if they conclude the protocol is leading to â€œserious economic, societal or environmental difficulties.” It doesn’t allow for the suspension of the whole Brexit Withdrawal Agreement.

The U.K. government’s repeated threats to pull the trigger on the safeguard measure “are an enormously disruptive element in negotiations,” Å efÄoviÄ told German news outlet Spiegel. “You try to achieve something together, and â€” boom â€” there’s the threat of Article 16 again. That goes to the heart of our relationship.”

He argued that the Northern Ireland Protocol “was the most complicated part of the Brexit negotiations and is the foundation of the whole deal,” adding: “Without the protocol, the system collapses. We must prevent that at all costs.”

The Commission last month drafted a sanctions package that could be used to retaliate against Britain should Article 16 be triggered, including options such as punitive tariffs that could be imposed on British exports to the EU within one month or a suspension of the entire post-Brexit trade deal within nine months.

Asked whether he expected the atmosphere of talks between Brussels and London to improve after U.K. Foreign Secretary Liz Truss was appointed Britain’s chief negotiator following the resignation of David Frost, Å efÄoviÄ said he was “pragmatic” about the change. “A successful joint solution with our British partners is more important to me than a great atmosphere,” he said.

He argued that existing problems with the Northern Ireland Protocol “should have been solved by now” when it comes to the supply of medicines, or will be addressed soon when it comes to customs and food safety checks. “Overall, we are on the right track,” he said, pointing that a regular poll by Queen’s University in Belfast found that as of the end of October, for the first time a majority of voters in Northern Ireland viewed the Protocol as positive.

Asked about his other big negotiation, with Switzerland, Å efÄoviÄ stressed that after the Swiss decided in May to ditch a previously negotiated agreement, it was now up to Bern to make the next move.

“First of all, we needed a political commitment from the Swiss government that it is serious about talking to us” about issues such as state aid and social rules or a dispute settlement mechanism, he said. “We would also need a clear timetable, a roadmap. We need to know when we want to talk about what â€” so that it is clear that the discussion will not take another 20 or 30 years.”

Å efÄoviÄ said the EU would not punish Switzerland with “negative measures” if Bern decided not to resume talks, but he warned that bilateral relations would inevitably suffer.

The EU and Switzerland are connected via a patchwork of bilateral deals, some of which are decades old and which companies on both sides say are no longer fit for modern challenges. One agreement on the mutual recognition of medical devices expired in May, meaning it will be more complicated for manufacturers to trade such devices between the EU and Switzerland.

“The EU’s relationship with Switzerland is in danger of disintegrating if the bilateral treaties gradually expire and are not renewed,” Å efÄoviÄ warned, adding that such a development would “eventually make our relationship obsolete.”