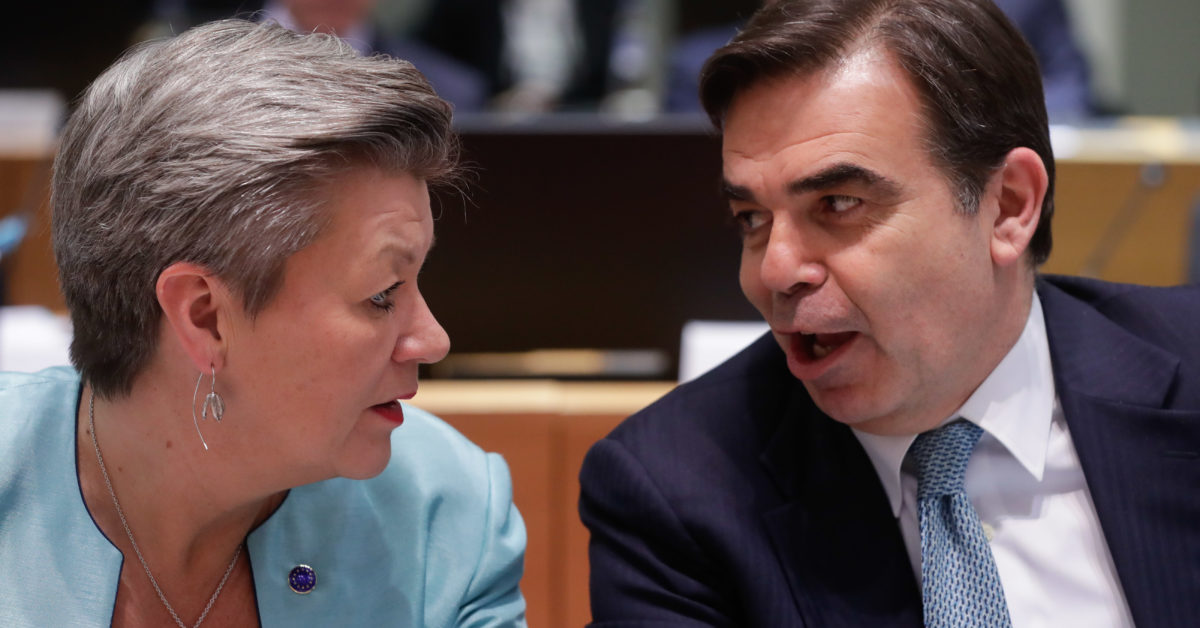 At an in-person meeting in August, two EU commissioners sat side-by-side while discussing migration â€” a COVID-19 protocol breach that illuminated the blocâ€™s internal power struggles just as an infamous seating mix-up did months ago in Turkey.Â

The meeting â€” a gathering of interior ministers â€” was called just weeks after the Taliban seized Afghanistan and days before allied troops were set to depart the country for good. EU officials were anxious that the countryâ€™s destabilization would cause a surge of Afghans heading for Europe, seeking asylum from the militant group.Â

For the gathering, the EUâ€™s pandemic rules dictated that each institution would get one seat at the table, with two staffers seated behind at a safe distance, according to a map of the seating arrangements seen by POLITICO. Within the European Commission, however, two commissioners share the migration portfolio â€” Ylva Johansson, the home commissioner, and Margaritis Schinas, the Commissionâ€™s vice president in charge of promoting the European way of life. Â

While Johansson is the formal counterpart to national interior ministers, Schinasâ€™ responsibilities include a heavy dose of migration.

In the end, they just both sat at the table without the required distance between them. The Commission then tweeted out a photo of the two officials, side-by-side.Â

The violation itself was, relatively speaking, a lesser offense. But the backstory is a revealing EU tale, a confluence of competing power structures and lax enforcement of pandemic regulations. For some officials, it was evidence of what one called a â€œcertain arroganceâ€ at the Commission, itself a rule enforcer as the EUâ€™s â€œguardian of the treaties.â€Â

The incident also signals that five months after Sofagate â€” the seating arrangement snafu that exposed rifts over who represents the EU on the world stage â€” protocol and furniture arrangements continue to bedevil EU institutions. Internally, some officials have even dubbed the latest incident â€œChairgate.â€

Indeed, Sofagate appears to have been hanging over the planning in the lead-up to the August 31 meeting.Â

Sofagate occurred in April, when two EU leaders, European Commission President Ursula von der Leyen and European Council President Charles Michel, were in Turkey to meet with President Recep Tayyip ErdoÄŸan. When the three officials went to pose for a photo op, Michel took the seat next to ErdoÄŸan, relegating von der Leyen to a nearby sofa. The snub prompted allegations of sexism, including from von der Leyen herself, thrusting divisions between the two EU chiefs into the public spotlight.

This time around, similar dynamics were at play.Â

Schinas, as a Commission vice president, technically outranks Johansson. Accordingly, several officials noted it would be bad optics to have Schinas sitting behind Johansson.

But others argued there were also fears that having Schinas, a man, at the table with Johansson, a woman, behind him would also look bad.Â

Complicating matters further was what numerous officials described as a fierce rivalry between the two officials, also driven by their differing ideologies. Schinas, who is Greek, is a member of the center-right European Peopleâ€™s Party, while Johansson, who is Swedish, is a socialist.Â

All of those factors were the backdrop to the planning leading up to the meeting.Â

An EU official said the Council of the EU, which hosted the meeting, drew up a seating chart that was â€œin line with the Belgian rules for the workplace to keep at least 1.5 meters distance.â€ That meant, the official added, â€œthat delegations, including the Commission, can only have one seat at the main table.â€

Yet before the meeting, the official said, â€œthe Commission requested an extra seat at the table.â€

The request was denied, the official said: â€œThe room was prepared in accordance with the rules in force, with one seat for the Commission at the main table.â€

It said that before the meeting, Schinas went to the rotating Council presidency, currently held by Slovenia, to request an extra seat at the table.Â

In the end, a second EU official said, someone from the Commission simply added the second chair themselves.Â

Thus the COVID-19 rules were broken. And Chairgate had begun.Â