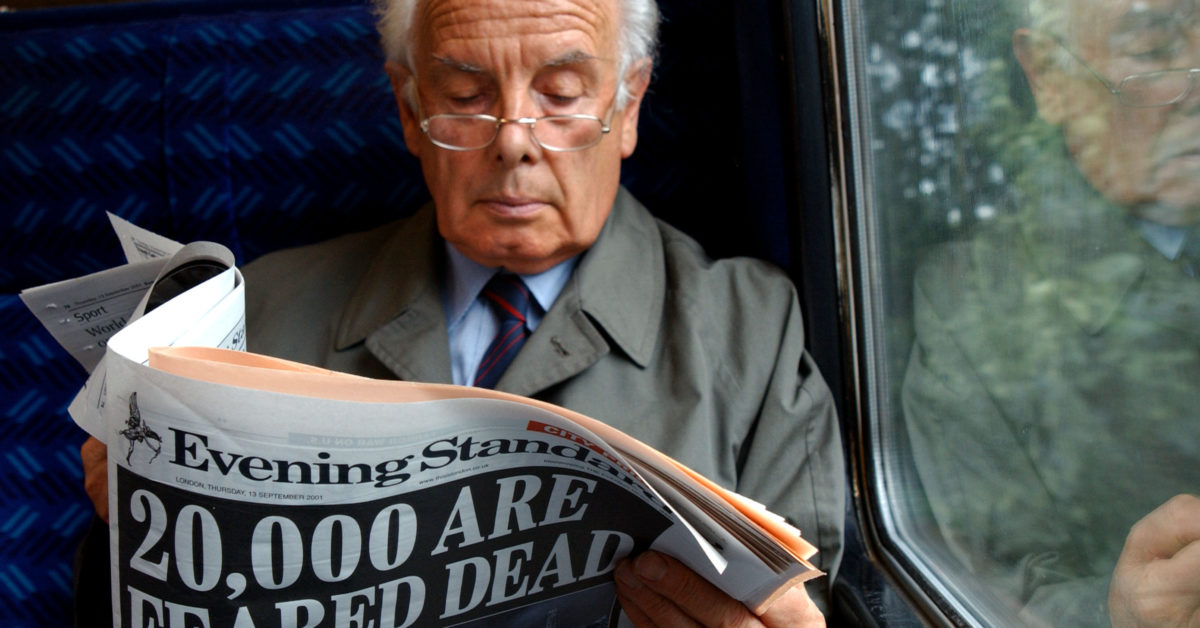 â€œTony Blair had just gone down to Brighton for a speech, and I was looking forward to a nice, quiet day,â€ Blairâ€™s former chief of staff Jonathan Powell recalls.

â€œThe first attack happened, and I saw it on the TV screen opposite me. And at first people seemed to be suggesting it was a light aircraft, and a horrible accident. And then the duty clerk in Downing Street came rushing in to say thereâ€™d been another plane crash into the World Trade Centre. And I said, â€˜no, no, donâ€™t be silly. Itâ€™s obviously just the TV repeating the film.â€™ He said, â€˜no, it really is another attack.’â€

So began one of the most dramatic days the modern world has ever known.

This week, to mark the 20th anniversary of the 9/11 attacks, POLITICOâ€™s Westminster Insider podcast features interviews with many of the most senior officials in Blairâ€™s government of 2001, and asks them to relive and reflect upon the events that took place.

The immediate concern after the towers were first struck, Powell tells the podcast, was whether Britain might also come under violent attack.

â€œThat was obviously the first reaction,â€ he says. â€œCould there be copycat attacks? You donâ€™t quite know what youâ€™re preparing yourselves against. But the police reinforced the streets â€” we got more police in Whitehall and places like that almost immediately. The transport secretary closed the airspace over London.

â€œYou donâ€™t get a lot of time to think. I remember having two phones in my ears the whole timeâ€¦ You donâ€™t really have a chance for the whole enormity of it to sink in.â€

One man who did instantly grasp the scale of what had happened was Blair himself, who spoke to Powell and Cabinet Secretary Richard Wilson by phone before racing back to No. 10.

â€œHe said, â€˜Whereâ€™s [President] Bush? Howâ€™s he going to react?â€™ He moved immediately â€” and I was impressed â€” to the big picture: who did it and how is Bush going to react? And how do we influence Bush that he doesnâ€™t do anything stupid? That was where he was immediately, on the phone.â€

Within an hour or two Blair was back in Downing Street and leading meetings of his top officials. One aide he was unable to contact, however, was David Manning, his most senior adviser on foreign affairs.

Manning had travelled to the U.S. at the weekend for talks with his opposite number, Bushâ€™s national security adviser Condoleezza Rice, and was on a plane flying back into New York from Washington as the terrorists struck the twin towers.

â€œI was sitting in a window seat looking out over Manhattan, and I looked down and saw a pillar of black smoke,â€ he recalls.

After landing safely at JFK airport, Manning watched the horror playing out on big screens.

â€œIâ€™ve often thought â€” what if I had been flying on from New York, to letâ€™s say, the West Coast?â€ he says. â€œOf course itâ€™s in your mind. You think, â€˜how extraordinary that I have seen this and I have escaped.â€™ â€¦ Of course, youâ€™re bound to feel â€˜this could have been me.’â€

Eventually the airport was evacuated and all further flights cancelled. Travel back into Manhattan was not advised. After a â€œsurrealâ€ night at a run-down motel in Queens, Manning returned to Washington the following morning for a meeting of top U.S. and U.K. intelligence officials at the CIAâ€™s headquarters.

â€œI joined a meeting chaired by George Tenet, head of the CIA at Langley, which was a discussion between the American and British intelligence agencies, together with input from the military and so on,â€ he recalls.

â€œIt was very clear joining them that the intelligence agencies were pretty certain this would have been an al-Qaeda attack, and that we would be looking for Osama bin Laden. They werenâ€™t 100 percent sure â€” but there was not much time spent trying to decide whether it might be anybody else. They were pretty clear in their own minds.â€

Already, in that first summit of intelligence officials barely 24 hours after the attacks, attention was turning to Afghanistan.

â€œI think they understood very early on we were dealing with Afghanistan,â€ Manning says. â€œBecause clearly the regime had given Osama bin Laden sanctuary, and it was from Afghanistan â€” they were pretty clear â€” that this series of atrocities had been planned. And the question was, what did you do about that? How did you try to deal with what was now seen as a very potent threat?â€

What would follow would be 20 years of bloodshed, and many more thousands of lives lost.