Evidence of Fur and Leather Clothing, Among World’s Oldest, Found in Moroccan Cave 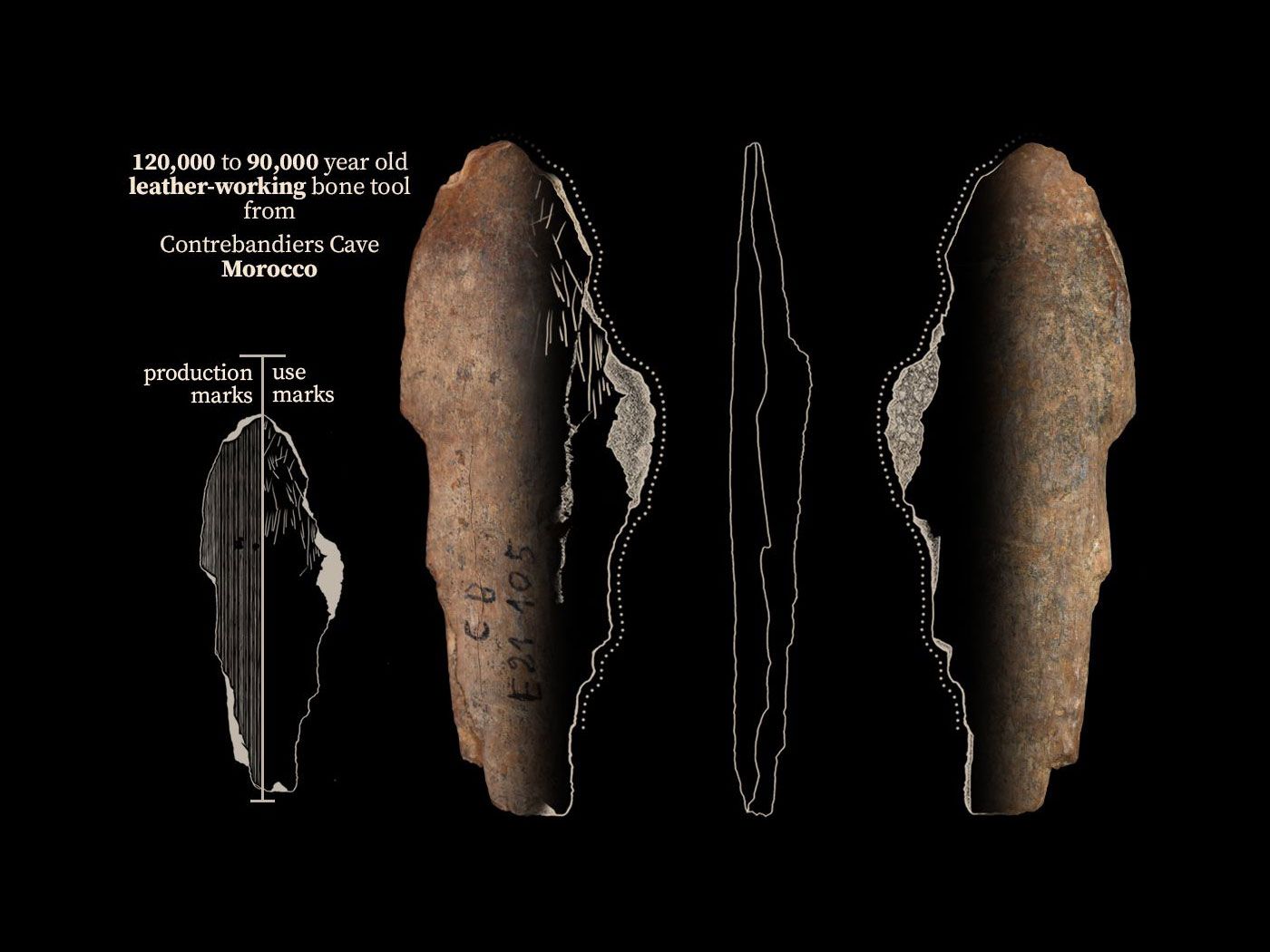 Fur is a controversial fashion statement these days. But stepping out in a wildcat cape or jackal wrap was de rigueur for Pleistocene humans, according to the recent discovery of a 120,000-year-old leather and fur production site that contains some of the oldest archaeological evidence for human clothing.

Homo sapiens at the site first made and wore clothes around the onset of an Ice Age which may suggest that, even in relatively mild Morocco, clothes were adopted as a way to keep warm. But the invention of animal-based apparel also corresponds with the appearance of personal adornments, like shell beads, which hints that prehistoric clothing, like todayâ€™s styles, could have been about style as well as functionality.

Emily Hallett, of the Max Planck Institute for the Science of Human History in Germany, didnâ€™t set out to investigate where and when humans started wearing clothes, which decompose and vanish after a few thousand years at most. Initially interested in diet, she was examining bones to see which animals Pleistocene humans ate, and how they butchered them, in Contrebandiers Cave on Moroccoâ€™s Atlantic Coast.

But Hallett found bones she wasnâ€™t expecting: dozens of tools carefully shaped, smoothed and polished into implements ideal for scraping hides clean to make leather, and scraping pelts to produce furs. â€œThey look like the tools that people still use today to process hides for leather and fur,â€ Hallett says, noting that similar tools have also been found associated with the same tasks in far younger archaeological sites. Hallett, who co-authored a study on the findings in the September 16 issue of the journal iScience, worked with a team that included the late Harold Dibble, an influential archaeologist from the University of Pennsylvania.

The researchers found 62 different bone tools in Middle Stone Age layers dated to 90,000 to 120,000 years ago. Despite their age the implements represent relatively specialized instruments for the tasks at hand, which suggests that humans first started using more crude versions of such implements to process fur and skins at an even earlier date.

Oddly a single marine mammal tooth was also found in the cave, dated to about 113,000 years ago, which represents a first for Pleistocene archaeological sites in North Africa. Future molecular analysis should identify the species but the shape strongly suggests that itâ€™s from an ancient sperm whale. Signs of wear on the tooth might have happened while the animal was alive, but it might have also been used as some type of flaking tool, used to sharpen another toolâ€™s edge by applying careful pressure.

But the bone tools tell only half of the story. Hallett also noticed that a lot of carnivore bones piled in the cave still bore the telltale marks of being cut by humans.

The remains of sand foxes, golden jackals and wildcats clearly showed marks like those still created in skinning techniques. Incisions were made to detach the skin at each of the animalâ€™s four paws, so that the skin could be pulled in one piece to the animalâ€™s head. Skin at the head was then removed by cutting around the lips, which is also evidenced by ancient cut marks. These carnivore species show no marks of butchery that would suggest they were eaten, only the cuts necessary to remove skin. On the other hand, the remains of other animals including bovids akin to ancient cows, show clear signs that they were processed to produce meat for the Pleistocene dinner table.

â€œOnce those two pieces were there, bone tools used to prepare leather and fur and carnivore bones that have marks for fur removal, we put that together and realized that itâ€™s most likely this was evidence for the making of clothing,â€ notes Hallett.

The evidence suggests that North African cave dwellers were making and wearing clothing long before the great migrations of humans to which all living non-Africans can trace their roots. When those Homo sapiens left Africa to populate the corners of the globe, it appears that they likely did so adorned in an array of animal skins and furs.

The reason why our ancestors began creating those clothes in the first place may be more complex than it appears at first glance. Itâ€™s often theorized that many human cognitive and evolutionary leaps were born of necessityâ€”adapt or die. Early modern humans and Neanderthals needed, and seem to have produced, clothing to survive in colder times and places like Ice Age Europe (15,000 to 70,000 years ago).

But the climate around Contrebandiers Cave in Morocco was relatively mild 100,000 years ago, as it remains today. Thatâ€™s led some, including Hallett, to suggest that clothing might not have been needed for survival. But Ian Gilligan, author of Climate, Clothing and Agriculture in Prehistory, says Northern Africa can be surprisingly cold at times even in warmer eras, so that cold snaps and conditions like hypothermia would have presented a definite threat. Humans might well have adopted clothing for comfort against the chill even when conditions were not extreme, adds Gilligan, an archaeologist at the University of Sydney who was not involved with the study.
Â
â€œThis new study really pushes back the first good archaeological evidence for the manufacture of clothing, and itâ€™s coinciding nicely with the beginning of the last Ice Age about 120,000 years ago, so I think thatâ€™s really significant,â€ Gilligan says. â€œItâ€™s precisely at the time when youâ€™d expect to see the first clothing for protection from cold in context of the glacial cycles.â€

The earliest previous technological evidence for clothing didnâ€™t appear until about 75,000 years ago, in Southern African sites like Blombos Cave and Sibudu Cave. There scientists found the first confirmed bone awls, with microwear on the tips suggesting they were used hide-piercing to sew garments, together with hide-cutting stone blade tools and hide-scrapers. (Some much older sites have tools that suggest human relatives could have worn clothes hundreds of thousands of years ago, but the evidence is far less certain.)

The onset of colder climate isnâ€™t the only interesting development that corresponds with the creation of clothes in Africa. In that period of time personal ornaments appeared in the lives of Pleistocene humans. Contrebandiers Cave, for example, is littered with tiny shells that could have produced no nutritional benefit but may have been valued for other reasons.

â€œSome of them are pierced, and they show up all over Africa around this time,â€ Hallett explains. â€œMost archaeologists believe this is personal ornamentation, a form of symbolic expression, and itâ€™s interesting that this evidence for clothing shows up at the same time in these mild habitats.â€

While scientists say itâ€™s extremely unlikely that skins or fur could ever be found preserved from the far more ancient eras when humans first started wearing them, another line of indirect evidence seems to dovetail nicely with the archaeological findings at Contrebandiers. â€œHuman lice have evolved in tandem with their hosts, and can shed light on aspects of human evolution that lack direct data. It is like having another record of our history,â€ says David Reed a biologist at the Florida Museum of Natural History who was not involved with the study.

The lice that live in human clothing are a distinct lineage that evolved from those that live on our scalps. By using DNA sequencing to trace when these clothes-loving lice first appeared, genetically diverging from their relatives, scientists can learn when humans started wearing clothes in the first place. A decade ago Reed authored a genetic study of clothing lice that traced their lineages far back in time and suggested that H. Sapiens in Africa may have been wearing clothing as long as 170,000 years agoâ€”a date that corresponds nicely with the facts found in the ground in Morocco.

â€It is really gratifying to see that years later our prediction that clothing arose in Africa has been validated in finding clear evidence of clothing use in Pleistocene Africa,â€ says Reed.

Hallett is planning experiments in making and using bone tools to better understand how Paleolithic clothing was sourcedâ€”a process far more involved than online ordering or even a trip to the mall on a Holiday weekend. After all, humans had to first hunt and kill dangerous predators, develop skills in crafting and using ever more specialized tools and labor through time-consuming processing of handmade fur and leather. The first clothes makers must have felt that the payoff, whether in warmth, symbolic style or a combination of the two, was worth all that effort. Hallett believes it definitely paid dividends for our species.

â€œClothing and the expanded toolkits of early humans are likely parts of the package that led to the adaptive success of humans,â€ she says, â€œand helped our ability to succeed globally and in climatically extreme regions.â€