EXCLUSIVE: Ram Charan SECRETLY saw 30 minutes of his film RRR at a SOLD OUT show at Gaiety-Galaxy, without the audiences getting a hint of his presence (DETAILS INSIDE) : Bollywood News – Bollywood Hungama 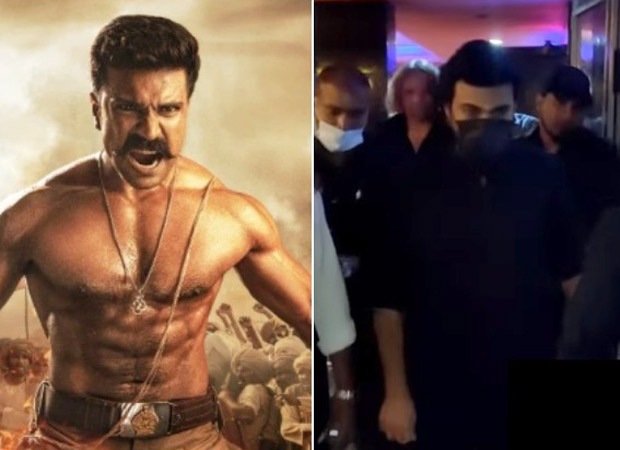 On Sunday, April 3, the moviegoers at Mumbaiâ€™s iconic single screen complex, G7 Multiplex, also popularly known as Gaiety-Galaxy, got a pleasant surprise as Ram Charan paid a visit. The superstar became a much-loved actor across India after the release ofÂ RRR, which was released last week. Directed by SS Rajamouli, the mega power starâ€™s role of Ram has been quite appreciated. His entry scene is one of its kind and the way he dons the avatar of Lord Rama, in the end, was seen to be believed. Hence, his visit created a frenzy in and around Gaiety-Galaxy.

EXCLUSIVE: Ram Charan SECRETLY saw 30 minutes of his film RRR at a SOLD OUT show at Gaiety-Galaxy, without the audiences getting a hint of his presence (DETAILS INSIDE)

While the pictures of his visit have already flooded the internet,Â Bollywood HungamaÂ has found some interesting details about his visit. As per a source, â€œRam Charan was in Mumbai and he decided to go to Gaiety-Galaxy to watchÂ RRRâ€™s Hindi version. He knew that the single screen property is known for its whistles and hoots and hence, he felt that this is an ideal place to check the audience’s reaction firsthand. The staff at the theatre was notified of his visit.â€

The source continued, â€œRam Charan came at around 8:45 pm. Thankfully, there was no crowd outside as the shows in all the 6 theatres in G7 were going to start post 9:30 pm. Hence, he quickly got inside without anyone knowing. That he wore a mask also helped. He went to the Balcony and sat on the first row from behind. The patrons inside the hall, who were watching the houseful 6:15 pm show, had no clue that the actor, for whom they are rooting for in the film, is right beside them!â€ The superstar then saw around the last 30 minutes ofÂ RRR.

According to another source, Ram Charan even watched the end credits song,Â â€˜Sholayâ€™, before deciding to leave. Soon, word spread about Ram Charanâ€™s visit. As soon as he came out, he was mobbed by excited fans.

Manoj Desai, executive director, G7 multiplex and Maratha Mandir Cinema said, â€œYes, Ram Charan came and saw the film for around 30 minutes. I was not present in the theatre as it was a Sunday.â€ He also said that heâ€™s glad that viewers inside the auditorium didnâ€™t get a hint of his presence. â€œAgar logon ko pata chalta, then it would have led to madness and my property would have got damaged.â€

What also caught the eye of everyone was that Ram Charan came barefoot. According to reports, this is because he is observing the 41-day long Ayyappa Deeksha, ahead of his visit to Sabarimala temple in Kerala.