Explained: How democracy was dismantled in Hong Kong in 2021 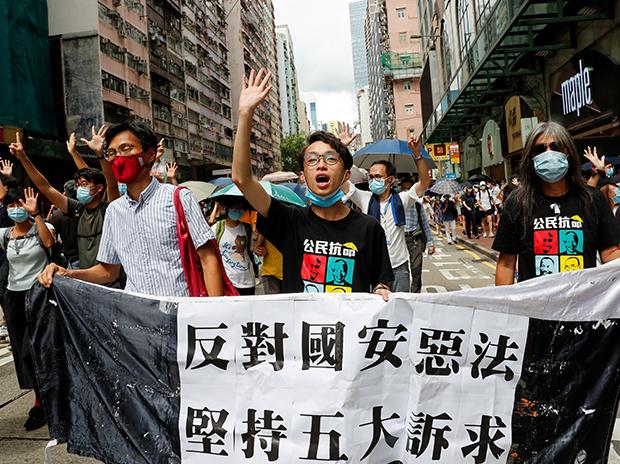 As the days of 2021 dwindled, so did any remaining traces of democracy in Hong Kong.


On Wednesday, a vocal pro-democracy media outlet — one of the last openly critical voices in the city — closed after a police raid. Earlier in December, the opposition was shut out from elections under a new law that puts all candidates to a loyalty test. And monuments commemorating the Tiananmen Square protests of 1989 were taken down.

Again and again throughout the year, the city’s authorities and the central government in Beijing stamped out nearly everything the pro-democracy movement had stood for. Activists fled abroad or were locked up under the draconian National Security Law imposed on the city 18 months ago. Unions and other independent organizations closed down.


Where once Hong Kong allowed “open opposition and questioning of the government’s core policies and legitimacy … any meaningful policy debates will now take place among a small circle of government loyalists,” said Kurt Tong, partner at The Asia Group and former U.S. consul general in Hong Kong and Macao.


The days when the former British colony was considered a bastion of freedom fade in memory. Returned to China in 1997, Hong Kong has endured an overhaul of its political system and a crackdown on political dissent. Authorities sought to suppress antigovernment sentiment that led to months of political strife in 2019.


The most recent example was Wednesday’s raid by Hong Kong police on the online pro-democracy news outlet Stand News. Seven people were arrested â€” among them two current and former editors and four former board members, including a popular singer, Denise Ho â€” for alleged sedition under a colonial-era ordinance.


The outlet announced that afternoon that it would halt operations.


Stand News is the second media outlet to shut down after being targeted by Hong Kong authorities. The Apple Daily newspaper closed earlier in 2021 after authorities raided its offices for a second time and froze millions in assets.


â€œDemocracy has been under a sustained assault for well over a year in Hong Kong,â€ said Luke de Pulford, a coordinator for the London-based Inter-Parliamentary Alliance on China, a group of legislators from democratic countries focused on relations with China. â€œNo democracy can function without a free press.â€ â€œIf no critical information is able to be published about the administration in Hong Kong or in China, then what last vestiges of democracy there were, I think we have to say, have been snuffed out.â€ In a string of tweets, Hong Kong activist Nathan Law called upon the world to â€œpublish about Hong Kong … (and) about the brave journalists who risk so much.â€ Law, who fled to London after the security law was implemented, said he feared â€œa domino effectâ€ that would lead other outlets to close.


Little remains of Hong Kong’s pro-democracy movement. More than 100 pro-democracy figures and others have been arrested under the security law, which penalises actions seen as separatist or subverting the Hong Kong or Chinese governments.


That includes 47 people charged with subversion in February over their roles in an unofficial primary election held in 2020 to determine the best candidates to field in planned legislative elections.


Authorities accused the activists of subversion, saying they planned to win a majority and use it to paralyse the government and eventually force Hong Kong leader Carrie Lam to step down.


The government postponed the 2020 elections, citing public health risks from COVID-19. Then, the central government in Beijing announced new election laws earlier this year that reduced the proportion of directly elected seats to less than a quarter and required all candidates to be loyal to Beijing.


The results were predictable: Earlier this month, when the election finally was held, pro-Beijing lawmakers won a landslide victory. The city’s largest opposition party, the Democratic Party, fielded no candidates for the first time since the 1997 handover.


The Civil Human Rights Front, a pro-democracy group that organized some of the biggest protests in 2019, also disbanded following a police investigation under the National Security law.


As the year drew to a close, several artworks were removed that commemorated the Tiananmen massacre.


Two days before Christmas, the University of Hong Kong cited legal risks in ordering the removal of the Pillar of Shame monument, which depicts a pile of torn and twisted bodies of Tiananmen victims. Several other universities followed suit, making away with pro-democracy and Tiananmen statues.


China’s Communist Party has long sought to erase Tiananmen from the public consciousness in the mainland, forbidding any commemorative events. Now it seems determined to do the same in Hong Kong in the name of restoring stability to the city.