â€˜Explorerâ€™ Eagle Finds A Home In Coastal Maine, Far From Its Native Asia 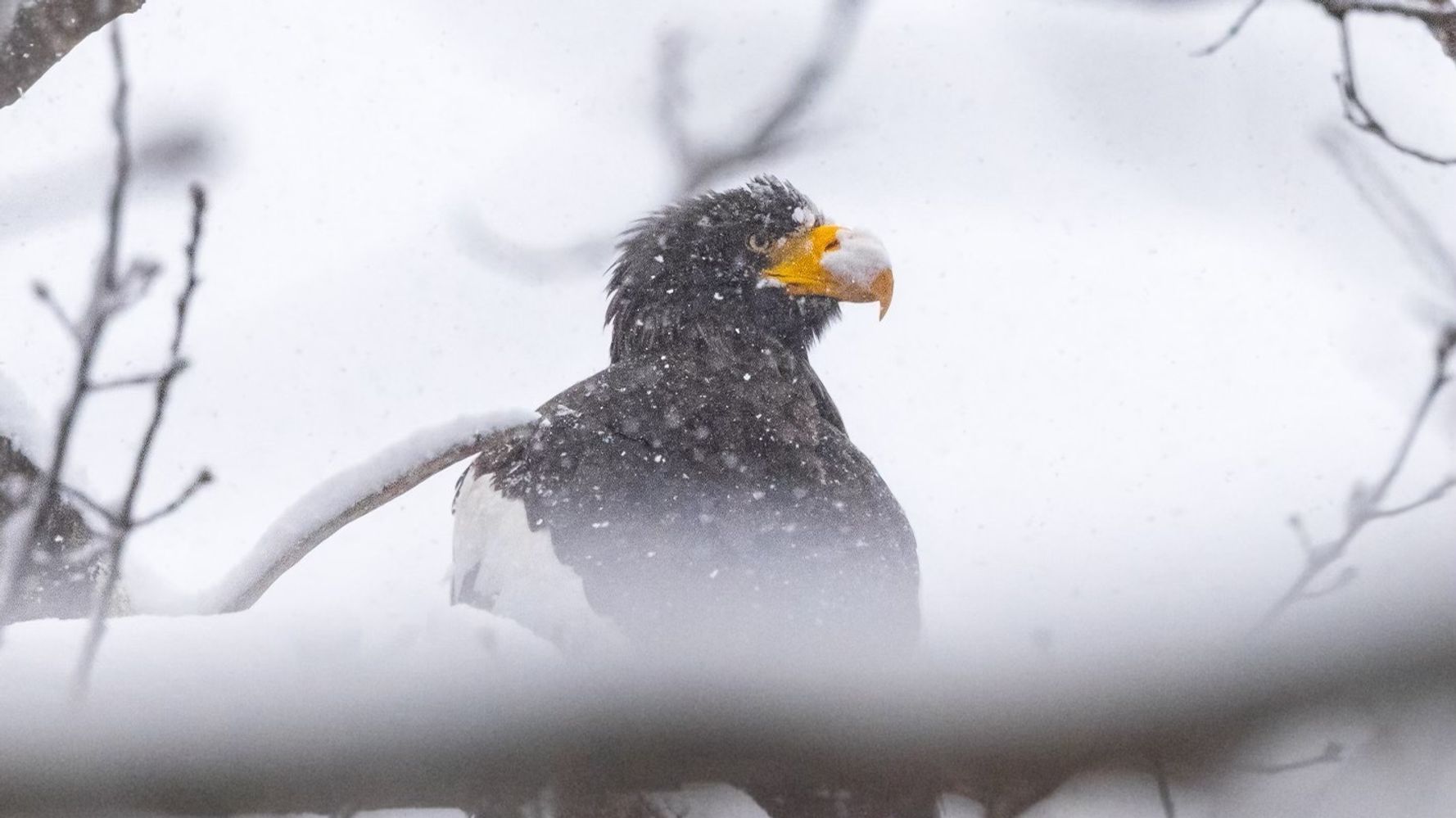 BOOTHBAY HARBOR, Maine â€” Winter is typically a sleepy time for this small seaside town nestled on a peninsula about an hour northeast of Portland. With no tourists, many businesses shut down entirely for the season.

But visitors have flocked here in recent weeks, braving frigid temperatures for a chance to glimpse Boothbayâ€™s newest resident: a rare bird of prey that has no earthly business in this part of the world.

The Stellerâ€™s sea eagle, a giant raptor native to parts of Asia and Siberia, has been bouncing around Maineâ€™s midcoast since Dec. 30 â€” its latest stop on an epic journey across North America. While the species occasionally turns up in western Alaska, this is the first time one has been documented in the Lower 48.

â€œI would say that this is the most exciting rare bird thatâ€™s ever been in the United States,â€ Nick Lund, the advocacy and outreach coordinator for Maine Audubon, told HuffPost.

Several factors brought Lund to that conclusion. â€œIts rarity â€” there are only 4,000 of them in the entire world,â€ he said. â€œIts physical impressiveness. Itâ€™s the largest eagle in the world, itâ€™s huge, itâ€™s identifiable. And the fact that it is so far from its home.â€

The stunning bird, which author Thomas Hynes aptly described as a â€œmuppet,â€ has a large, cartoonish yellow-orange beak and distinctive white plumage along its upper wings that resembles a splattered snowball. Stellerâ€™s sea eagles are significantly larger than bald eagles, with a 6- to 8-foot wingspan, and weigh up to 20 pounds.

For whatever reason, the bird seems to have taken a liking to Boothbay, frequenting a number of sites along the water. It is unclear whether it is a male or female.

The scene on Sunday felt like a sporting event. That morning, the bird had been spotted near a seasonal inn at Spruce Point, south of town. The sighting was reported on a 1,700-member GroupMe account created to track and discuss the wayward bird. The news traveled fast. By the time HuffPost made it to Spruce Point at 11:30 a.m., the parking lot and road were lined with cars from Maine, Connecticut and New York. But the bird, perhaps startled by the growing crowd, had been flushed from its perch and headed west, toward Mouse Island.

Dozens of bird enthusiasts gathered in small groups along the two-lane road, binoculars and spotting scopes aimed across the harbor. Someone thought theyâ€™d found it but was disappointed when it was merely a mundane bald eagle.

Then one woman, whoâ€™d been viewing the bird from a different vantage point, described its location for other anxious birders.

â€œOh, my God!â€ another woman shouted after catching a glimpse. â€œI want to give you a big hug,â€ she told the woman whoâ€™d helped point it out.

There, on the north end of the island, the eagleâ€™s white wing bars popped against a backdrop of evergreen branches. Every once in a while, it flashed its brightly colored beak.

Louis DeMarco, of Brooklyn, New York, was dropping off a kayak for repair in the town of Bath when a friend and fellow birder told him he wasnâ€™t far from the famous bird. Instead of heading home to New York, DeMarco detoured 45 minutes to Boothbay. The decision didnâ€™t disappoint.

â€œHoly moly! HOLY MOLY!â€ DeMarco said repeatedly after someone let him use this scope to view the eagle from across the harbor.

â€œThese are distant views. I think what they usually say is, â€˜Better view desired,â€™â€ he said, referencing a saying among birders for when you see a bird but wish youâ€™d been closer. â€œI didnâ€™t think I had any chance of it, so Iâ€™ll take a â€˜better view desired.â€™â€

This Stellerâ€™s sea eagle first surprised the birding world when it turned up along the Denali highway in southeastern Alaska in August 2020. Since then it has continued a slow journey east, popping up in Texas, eastern Canada and now New England. Before arriving in Maine late last month, it spent a week or so mingling with bald eagles along the Taunton River in southeastern Massachusetts.

Many have understandably taken to describing the animal as â€œlost,â€ but experts say all indications are that it is healthy and content in its travels.

â€œThis eagle is right at home,â€ Lund said. â€œItâ€™s on a different continent, but it is in a place that is very much like its native range. I choose to sort of celebrate it as an explorer, as someone living its best life and going out on its own and making its way in the world.â€

Birds turning up outside their normal range, known as avian vagrancy, is not uncommon. Some do get lost or are blown off course in inclement weather, typically during migration. And raptors, particularly younger ones, have been known to venture out in search of new territory.

Lund noted that sightings of rare and vagrant birds tend to spark everything from joy and excitement to concern.

Laurie Ireland, a lifelong birder and resident of Belfast, Maine, said she found herself in tears thinking about how the eagle might not survive or make it back home. Of all the birds Ireland has observed over the years, the Stellerâ€™s ranks high on her list.

A few years ago, a great black hawk, a tropical species native to Central and South America, turned up in Maine and later had to be euthanized after suffering frostbite on its legs. The birding community mourned the loss.

Unlike the black hawk, which wasnâ€™t built to survive Maine winters, the Stellerâ€™s sea eagle appears to be thriving here, Lund said.

As for how long it will stick around Boothbay, itâ€™s anyoneâ€™s guess.

â€œGetting into the spring will be very interesting, because thatâ€™s when these birds look for mates and territories,â€ Lund said. He noted it could possibly settle down and even breed with a bald eagle. (An apparent hybrid of the two eagle species was seen on Vancouver Island, British Columbia, in 2004.)

â€œEveryoneâ€™s sort of waiting to see what might happen,â€ Lund said.