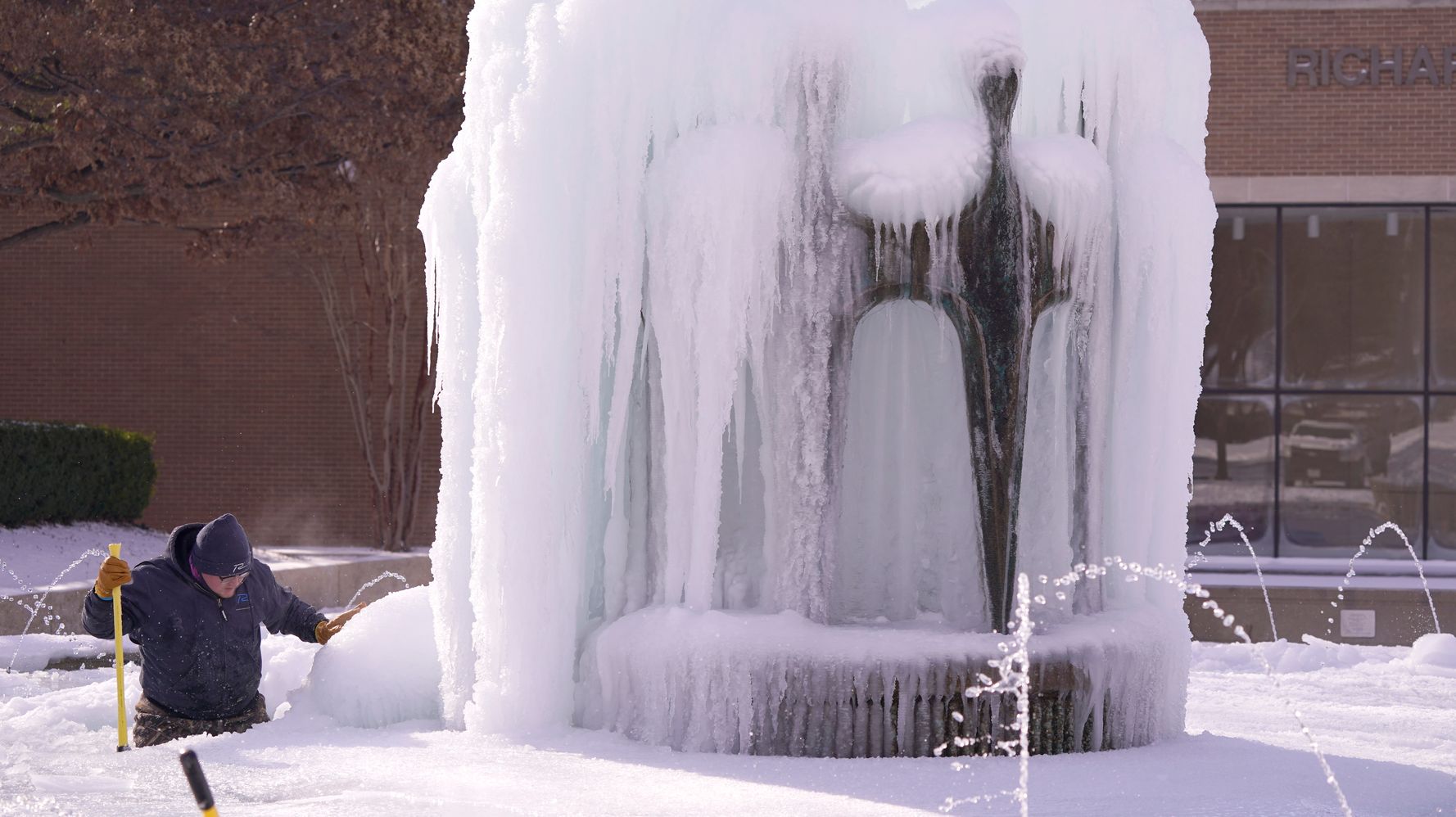 RALEIGH, N.C. (AP) â€” At least three people were found dead early Tuesday after a tornado tore through a seaside town in North Carolina at the rough edge of a winter storm that left millions without power in subfreezing temperatures and made travel treacherous in many states.

The storm that overwhelmed power grids and immobilized the Southern Plains carried heavy snow and freezing rain into New England and the Deep South and left behind record-setting cold temperatures. Wind-chill warnings extended from Canada into Mexico.

In Chicago, a foot and a half (46 centimeters) of new snow forced public schools to cancel in-person classes for Tuesday. Hours earlier, along the normally balmy Gulf of Mexico, cross-country skiier Sam Fagg hit fresh powder on the beach in Galveston, Texas.

The worst U.S. power outages were in Texas, affecting more than 4 million homes and businesses. More than 250,000 people also lost power across parts of Appalachia, and another quarter of a million were still without electricity following an ice storm in northwest Oregon, according to poweroutage.us, which tracks utility outage reports. Four million peopleÂ lost power in Mexico.

Texas officials requested 60 generators from the Federal Emergency Management Agency and planned to prioritize hospitals and nursing homes. The state opened 35 shelters to more than 1,000 occupants, the agency said.

More than 500 people sought comfort at one shelter in Houston. Mayor Sylvester Turner said other warming centers had to be shut down because they lost power.

Blackouts of more than an hour began around dawn Tuesday for Oklahoma City and more than a dozen other communities. The blackouts stopped electric-powered space heaters, furnaces and lights just as temperatures hovered around minus 8 degrees, some of the lowest readings in a more than week of below-freezing conditions.

Nebraskaâ€™s blackouts came amid some of the coldest weather on record: In Omaha, the temperature bottomed out at 23 degrees below zero overnight, the coldest in 25 years.

Rolling outages also affected some northern Iowa counties, where overnight lows dipped to nearly 30 below around Sioux City and wind chills to around 40 below in some places. Blackouts of up to 30 minutes also were planned for Tuesday morning in the northwestern Minnesota city of Moorhead.

The Southwest Power Pool, a group of utilities covering 14 states, imposed rolling two-hour blackouts to ease the extreme demand for heat and electricity, saying they were â€œa last resort to preserve the reliability of the electric system as a whole.â€

The outages forced a Texas county to scramble to get more than 8,000 doses of Modernaâ€™s coronavirus vaccine into arms after a public health facility lost power early Monday and its backup generator also failed, said Rafael Lemaitre, a spokesman for Harris County Judge Lina Hidalgo.

County officials distributed the doses at three hospitals, Rice University and the county jail because those places had large groups of people in places where they would not have to drive and with appropriate medical personnel on hand.

â€œIt feels amazing. Iâ€™m very grateful,â€ said Harry Golen, a 19-year-old sophomore who waited for nearly four hours with his friends, much of it in the cold. He was among the last people to get the shots, which otherwise would not have reached students until March or April.

More than 400,000 additional doses due in Texas now will not arrive until at least Wednesday because of the weather, officials said.

In North Carolina, the National Weather Serviceâ€™s office in Wilmington dispatched a team to confirm that a tornado did indeed touch down and to survey damage in Brunswick County, said Mark Willis, the officeâ€™s meteorologist in charge.

Three people died and at least 10 were injured when the apparent tornado tore through a golf course community and another rural area just before midnight Monday, destroying dozens of homes. Gov. Roy Cooper said rescue operations were continuing Tuesday.

â€œThe sky lit up and there was a lot of pop-pop-popping. And the loud thunder. And then it sounded like a train, a freight train coming through. … Thatâ€™s when all the damage occurred,â€ said Sharon Benson, 63. She said her roof was damaged and her garage door blown off. Windows were shattered and nearby trees were uprooted.

Authorities in multiple states reported deaths in crashes on icy roads , including two people whose vehicle slid off a road and overturned in a waterway in Kentucky on Sunday, state police said.

Deaths in Texas included a woman and a girl who died from suspected carbon monoxide poisoning in Houston, at a home without electricity from a car running in an attached garage, police said. Law enforcement also said subfreezing temperatures were likely to blame for the deaths of two men found along Houston-area roadways.

In west Tennessee, a 10-year-old boy died after falling into an ice-covered pond on Sunday during a winter storm, fire officials said.

Air travel was also affected. By midmorning Monday, 3,000 flights had been canceled across the country, more than half of them in Texas. At the main airport for Dallas and Fort Worth, the temperature was 4 degrees Fahrenheit (-15 degrees Celsius), colder than Moscow.

Most government offices and schools were closed for Presidents Day, and authorities pleaded with residents to stay home Tuesday as well. About 100 school systems closed, delayed opening or switched to remote classes on Tuesday in Alabama, where forecasters said conditions might not improve in some places until temperatures rise above freezing Wednesday afternoon.

Louisiana state police reported investigating nearly 75 weather-related crashes caused by a mixture of snow, sleet and freezing rain in the past 24 hours.

Northern Louisiana was in the bullseye for the highest amounts of freezing rain from the incoming system, forecasters said Tuesday, and more than a foot (30 centimeters) of snow was possible in Arkansas, according to the federal Weather Prediction Center.

Associated Press staff around the United States contributed to this report.