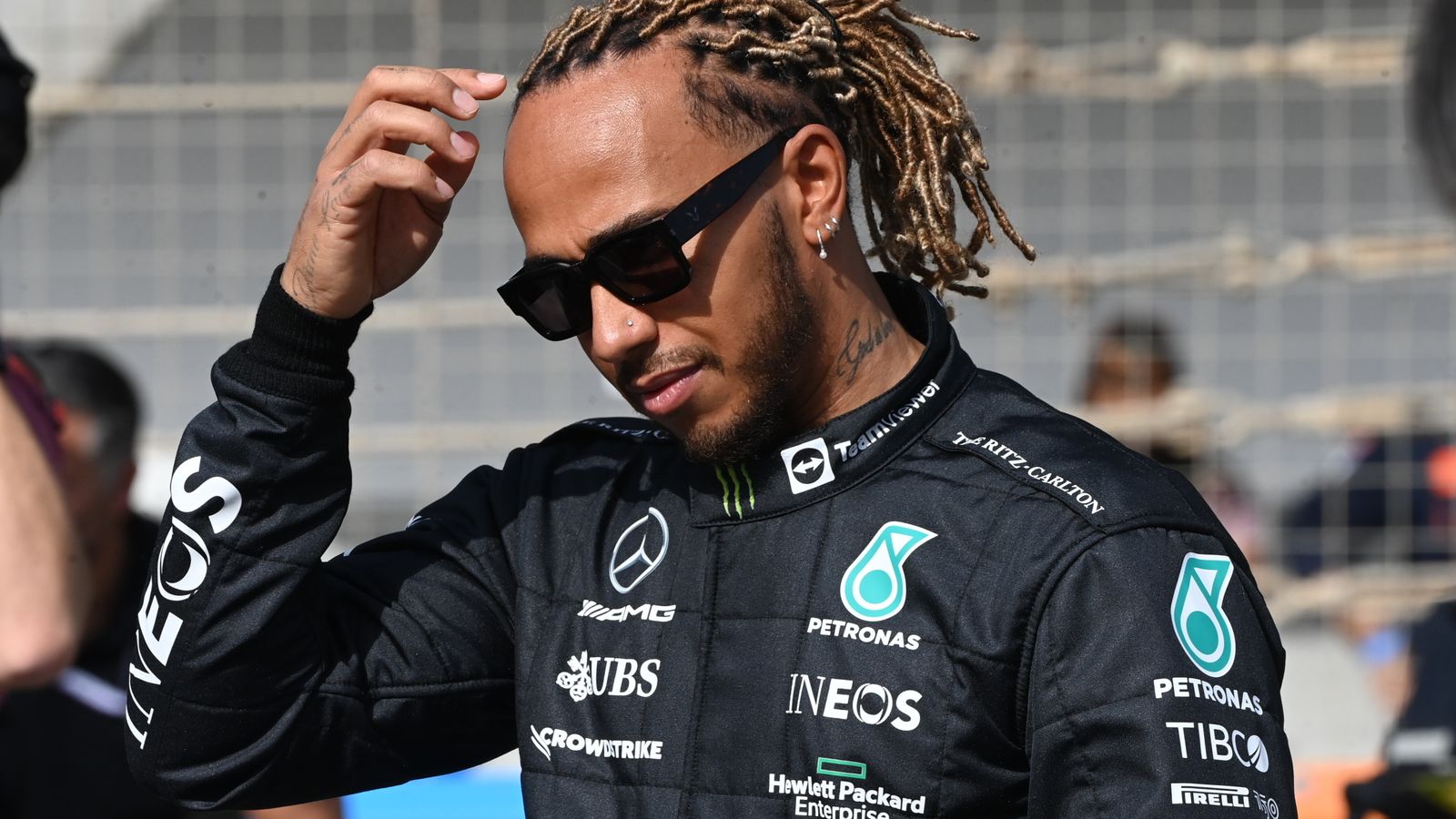 Lewis Hamilton gives his verdict on the all-new Mercedes car; Ferrari have impressed during pre-season testing but Carlos Sainz is cautious over the world champions’ potential, dismissing the “typical Mercedes hype”

Lewis Hamilton has admitted he is struggling to “tame” Mercedes’ new Formula 1 car at pre-season testing and believes fast-starters Ferrari could be the team to beat come the opening Bahrain GP next weekend.

World champions Mercedes have generated headlines this week with a radical new design for their W13 car but have yet to turn that intrigue into fast times, with Hamilton only fifth on Friday despite a soft-tyre run.

“It’s tough at the moment,” admitted Hamilton, who had several off-track moments. “You can see the on-boards, tank-slappers left right and centre, bouncing and bumpy.

“Not quite happy at the moment but we’re trying to tame it.”

While Kevin Magnussen set a surprise fastest time on the penultimate day of testing in Haas’ extra hour of running, it was Ferrari who have appeared consistently the fastest and most comfortable.

And asked who would win next weekend’s season-opening Bahrain GP if it took place this weekend, Hamilton replied: “I think Ferrari from what I can see, they would get a one-two… or maybe Red Bull.”

Hamilton’s comments follow those from Carlos Sainz, who earlier suggested Mercedes and their driver George Russell were playing “typical” games in talking up the Italian team ahead of the season.

Russell admitted at testing at Sakhir that Ferrari were looking very solid and potentially the strongest in low fuel runs.

Sainz said on Friday that the Briton’s comments were “typical Mercedes, typical George… just hype up the others and then come to the first race and blow the competition away”.

Max Verstappen and Sainz go head-to-head, flexing their muscles in the Red Bull and Ferrari

Max Verstappen and Sainz go head-to-head, flexing their muscles in the Red Bull and Ferrari

“As you can imagine I don’t believe much… we can see what they are doing [on track] and I’m not going to say much.”

Responding to those remarks, which Sainz made before out-pacing Max Verstappen and Hamilton in the afternoon, Hamilton said: “We’ll be really, really good if we were having all these oversteer moments and this tacky driving to hide our cars. It’s not the case.

“We have things we’re trying to work through. Others are struggling less but who knows maybe we’ll get to next week and have a better understanding.”

Are Ferrari the team to beat?

Mercedes have been constructors’ champions for the past eight years.

Ferrari, the sport’s oldest and most successful team, finished third overall last year after climbing back from a 40-year low of sixth in 2020.

They have not won a drivers’ title since now-retired Kimi Raikkonen was champion in 2007 or a constructors’ crown since 2008.

This year sees major rule changes, however, and Ferrari switched full attention to their 2022 car earlier than title-chasing rivals and have also benefited from more wind tunnel time.

The buzz in Italy, and in the F1 paddock, is mounting.

Friday’s headlines in Italy’s Gazzetta dello Sport highlighted those rising hopes, even if that is still far from front-page news.

“Robust and fast, the Ferrari goes,” the paper declared, noting the words of Russell and Verstappen. “The F1-75 impresses the rivals”.

Red Bull boss Christian Horner, whose team were locked in a season-long battle with Mercedes last year, added to the praise.

“For me the car that looks the most settled on the circuit is the Ferrari at the moment,” he said. “They’ve had a very strong testing period so far, both in Barcelona and in Bahrain.

“They’ve looked extremely competitive whenever on track, but you have to remember these cars are still very immature.

“The rate of development will be fast and intense and I expect that to change and Mercedes are going to be a huge factor in this championship, I have no doubt.”