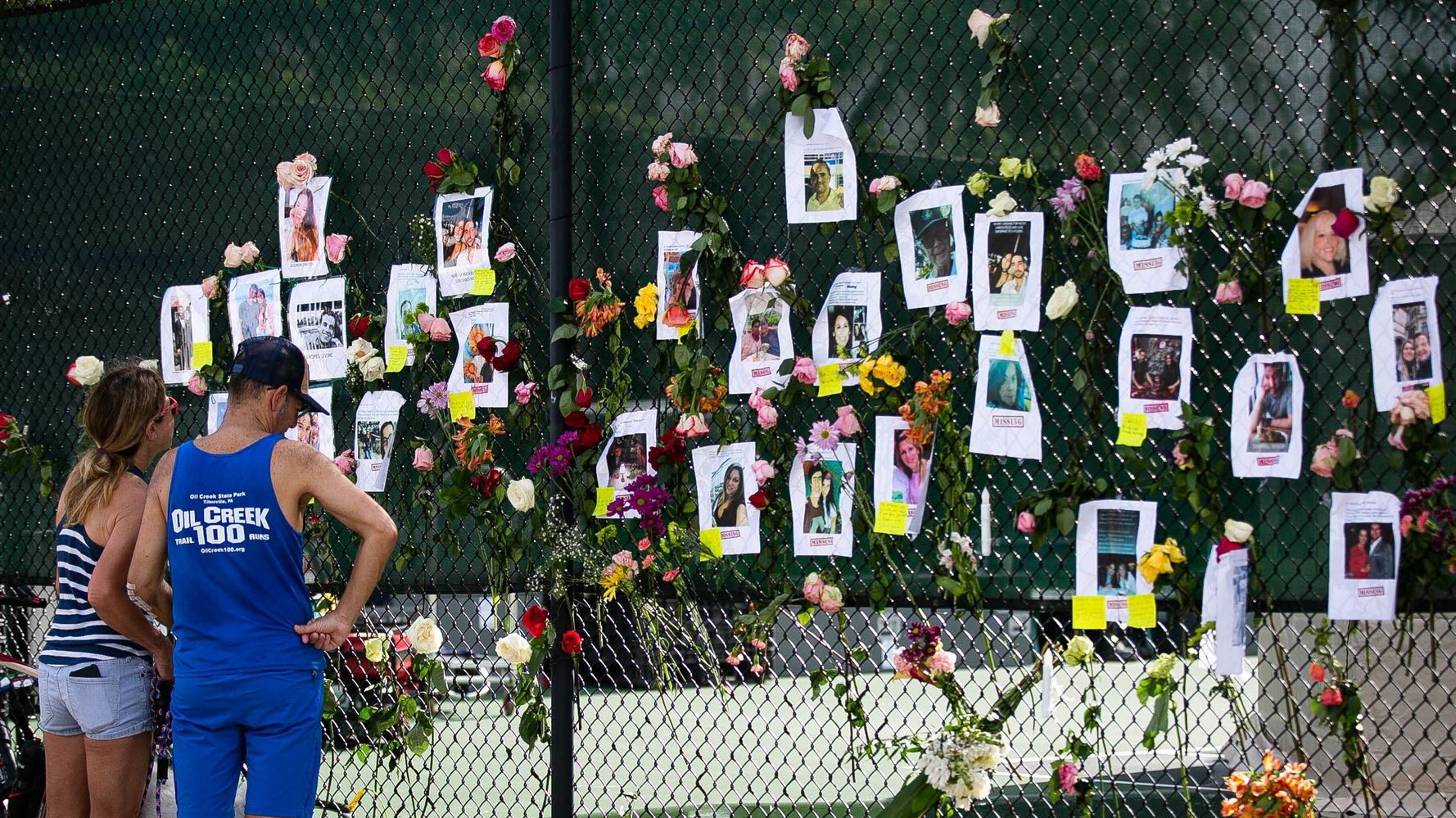 One person died in the hospital, and workers pulled four more bodies from the wreckage, the mayor said.

Scores of rescue workers remained on the massive pile of rubble, working to find survivors among the more than 150 people who remain unaccounted for. Four of the dead have been identified and next of kin notified, the mayor said.

Four days after Thursdayâ€™s collapse,Â more than 150 people remain unaccounted forÂ in Surfside, and authorities and loved ones fear the toll will go much higher.

As rotating teams of rescuers used heavy machinery and power tools to clear the rubble from the top and tunnel in from below, the Noriega family hoped that their 92-year-old matriarch, Hilda Noriega, had somehow survived.

When Mike Noriega heard that part of the condominium tower where his grandmother lived had collapsed, he rushed with his father to the scene. They arrived at a nightmarish 30-foot pile of broken concrete and mangled metal, the remains of the 12-story building known as Champlain Towers South.

But among the flying debris, they stumbled across mementos that bore witness to Hildaâ€™s life on the sixth floor: an old picture of her with her late husband and their infant son, and a birthday card that friends from her prayer group sent two weeks earlier with the acronym â€œESM,â€ Spanish for â€œhand-delivered,â€ scrawled across the yellow envelope with a butterfly etching.

â€œThere was a message in the mess of all this,â€ said Mike Noriega, who last spoke with his grandmother the day before the disaster. â€œIt means not to give up hope. To have faith.â€

Surfside Mayor Charles Burkett sought to assure families Sunday that rescuers were working nonstop. â€œNothing else on our mind, with the only objective of pulling their family members out of that rubble,â€ he told ABCâ€™s â€œThis Week.â€

â€œWeâ€™re not going to stop doing that â€• not today, not tomorrow, not the next day. Weâ€™re going to keep going until everybodyâ€™s out.â€

Hilda Noriega had called Champlain Towers South home for more than 20 years. But six years after her husbandâ€™s death, she was ready to leave. The condo was for sale, and she planned to move in with family.

She loved living near the ocean and friends, but â€œwhen you lose a spouse, you want to be surrounded by family … and she wanted to spend more time with her family and grandchildren,â€ said Sally Noriega, Hildaâ€™s daughter-in-law.

Hilda Noriega was a loving person who built a life with her husband and raised a family after coming to the U.S. from Cuba in 1960, her daughter-in-law said.

Carlos Noriega, Hildaâ€™s son and police chief of nearby North Bay Village, was one of the emergency responders atop the pile.

The Noriegas donâ€™t entirely know what to make of the treasured mementos found amid the chaos, but Sally said: â€œWe are a family of faith. Weâ€™ll just leave it at that.â€

They are among dozens of anguished families awaiting word on the fate of loved ones. The wait has been agonizing.

The atmosphere inside a hotel ballroom where around 200 family members were being briefed by authorities Saturday was tense, two people present told The Associated Press on condition of anonymity to discuss the private conversations.

The two said families frustrated with the slow pace of recovery efforts had demanded they be allowed to go to the scene and attempt a collective shout â€” an attempt as much to find survivors as a cathartic farewell to those who had died.

The mayor said Saturday that the identification of three bodies had dropped the number of people unaccounted for down to 156, and crews also discovered other unspecified human remains. The remains are being sent to the medical examiner, and authorities are gathering DNA samples from family members to aid in identification.

A video posted online showed an official briefing families. When he said they had found remains among the rubble, people began sobbing.

Late Saturday, four of the victims were identified, as Stacie Dawn Fang, 54; Antonio Lozano, 83, and Gladys Lozano, 79; and Manuel LaFont, 54.

The news came after word of aÂ 2018 engineering reportÂ that showed the building, which was built in 1981, had â€œmajor structural damageâ€ to a concrete slab below its pool deck that needed extensive repairs, part of a series of documents released by the city of Surfside.

Further documentation showed the estimated cost of the repairs would total over $9 million. That included more than $3.8 million for garage, entrance and pool remediation and nearly $3.2 million for fixes to the exterior faÃ§ade.

While officials said no cause for the collapse early Thursday has been determined, Florida Gov. Ron DeSantis said a â€œdefinitive answerâ€ was needed in a timely manner.