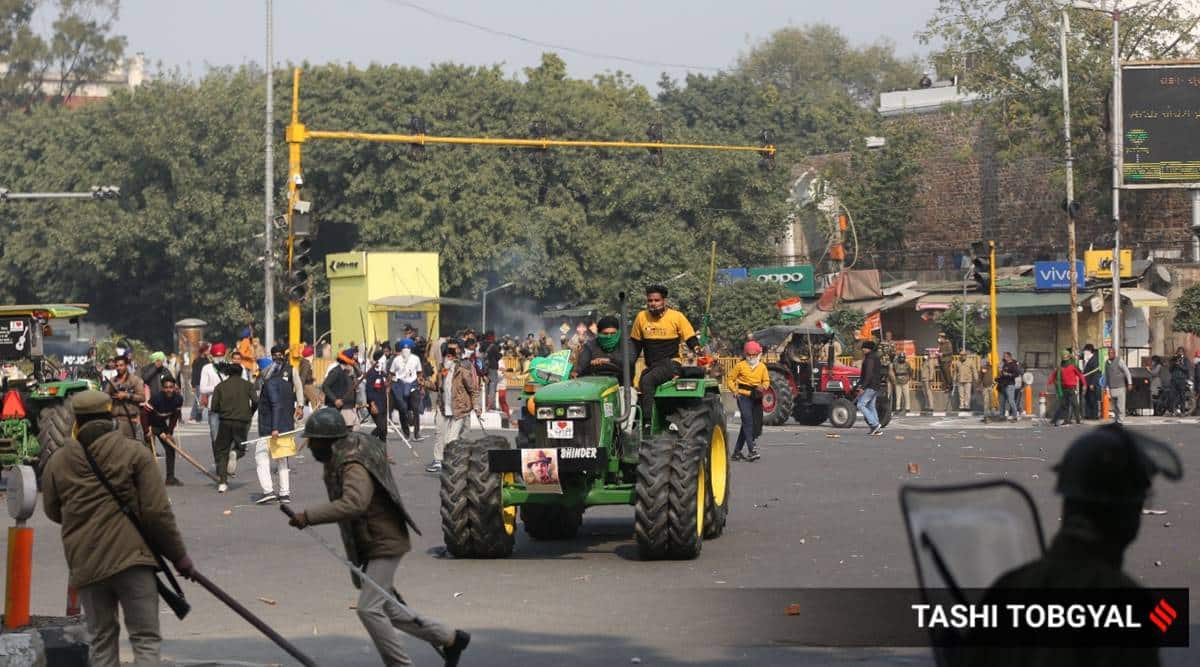 After two months of peaceful protests on Delhiâ€™s borders and 11 rounds of negotiations with the Central government, as the Republic Day tractor parade spiralled into chaos Tuesday, the Samyukta Kisan Morcha, a united front of the protesting farmers, and other farmer leaders dissociated themselves from the violence and strongly condemned the incidents.

â€œWe condemn and regret the undesirable and unacceptable events that have taken place and dissociate ourselves from those indulging in such acts. Despite all our efforts, some organisations and individuals have violated the route and indulged in condemnable acts. Anti-social elements have infiltrated our otherwise peaceful movement. We have always held that peace is our biggest strength, and that any violation would hurt the movement. We dissociate ourselves from all such elements that have violated our discipline,â€ the Morcha said in a statement.

In a statement issued late Tuesday evening, Joginder Singh Ugrahan, president of the Bharatiya Kisan Union (BKU, Ugrahan faction), said the message of todayâ€™s march â€œwould have been stronger if it had been kept free of communal issuesâ€.

â€œThe act of unfurling religious flags will provide the government an opportunity to begin a propaganda war against the peasant movement. There is a need to mobilise efforts to keep intact the secular and democratic character of this struggleâ€¦ these communal elements must be routed and driven away,â€ he said.

Earlier, speaking to The Indian Express, Ugrahan alleged the role of actor Deep Sidhu, among others, in Tuesdayâ€™s events. â€œWe saw faces of actor Deep Sidhu and Lakha Sidhana on social media and found that they were misguiding the youth. None of the farmer unions had planned to go towards Red Fort. I really wonder what was the motive behind what they did. Our peaceful agitation got a different colour today. It should have been avoided.â€

While Sidhu, a Punjabi actor who has associated himself with the farmersâ€™ protests, had on January 16 been issued summons by the NIA in connection with a case filed against the outlawed group Sikhs For Justice, Sidhana, who too has been seen at the Singhu border, has a history of criminal cases.

BKU leader and national spokesperson Rakesh Tikait, when asked if the protests had gone out of the hands of farm leaders, told ANI, â€œWe know the people who are trying to create disturbanceâ€¦ they have been identified. There are people from political parties who are trying to malign the agitation.â€

While condemning the incident at Red Fort, Gurnam Singh Chaduni, president of BKU Haryana, said, â€œWe condemn the action of people like Deep Sidhu who are the middlemen of the governmentâ€¦ He incited people to go to Outer Ring Road and later took them to Red Fort.â€ He added, â€œI want to clarify that this aandolan is not a religious aandolan, it is a jan aandolan, a kisan aandolan (peopleâ€™s movement, farmersâ€™ movement). People should be vigilant about persons like Deep Sidhu and should also stay away from rumours as well.â€

Through the day, Sarwan Singh Pandher, General Secretary of the Kisan Mazdoor Sangharsh Committee, a group thatâ€™s not part of the SKM, sent audio and video messages, asking people to come back from Red Fort as it was not a part of their original plan.

In a video message, he says, â€œMake a U-turn from Majnu ka Tila, going to Red Fort is not part of our plan.â€

In an audio message he is heard saying, â€œMy brothers, there is no plan to go to Red Fort. We have to go back to Kundli after the march on Outer Ring Roadâ€¦ You may have hoisted some flag tooâ€¦ Now come back, I appeal you all. I appeal to all those Nihang Singhs who have reached Red Fort to come back to Kundli border. Our agitation is a peaceful one and we will get defamed (if we indulge in violence).â€

Buta Singh Burjgill, President of the Bharatiya Kisan Union, Dakaunda group, and media in-charge at Tikri border for SKM, said, â€œWe went as per route plan. When a few farmers reached Red Fort, we immediately appealed to them to maintain peace. SKM had no such plan and we never went (to Red Fort),â€ he said, adding, â€œas per social media reports, Deep Sidhu and Lakha Sidhana incited people to move towards Red Fort. They were in the group of people at Red Fort . However, our tractor parade ended by 5 pm. We will now meet on Wednesday to decide what is to be done.â€

The farmer leaders alleged that the trouble-makers entered their convoy midway into the parade. Shingara Singh Maan, vice president of BKU Ugrahan, told The Indian Express, â€œWe started from Tikri as per plan and we were peacefully marching towards Nazafgarh roadâ€¦ As our convoy moved ahead towards KMP Expressway, some miscreants tried to disturb peace at Nangloi. So when we were coming back to Tikri via Nangloi, we faced lathi charge as well as tear gas shells. Police were not allowing us to go back to Tikri, because of which our members had to break barricades at Nangloi. Our men were on their way back to Tikri by 5.30 pm.â€

Manjit Singh Rai, president of the BKU Doaba, Kisan Ekta Union, and media in-charge at Singhu for the day, said, â€œThe ones who reached Red Fort were also farmersâ€¦ we appealed to them to maintain peaceâ€¦ Our aandolan had been running peacefully for the past six months and this peace is our strength.â€

Jagjeet Singh Dallewal, state president of BKU Ekta Sidhupur, said, â€œWe had decided on a route with the police, and it was meant to be a peaceful rally. Some people were misled and the Morcha had no role to play or any association with those who went to Red Fort or ITO. Kisan Mazdur Sangharsh Committee or Deep Sidhu are not associated with SKM and have been holding parallel protests. The fact is, if their people have done this, it is a great disservice to the cause. My heart goes out to the farmer who lost his life.â€

Harmeet Singh Kadian, president of BKU (Kadian), claimed that the Red Fort incident was a â€œconspiracy and machinationâ€ at the behest of the Government to â€œsabotage the farmersâ€™ protestsâ€.