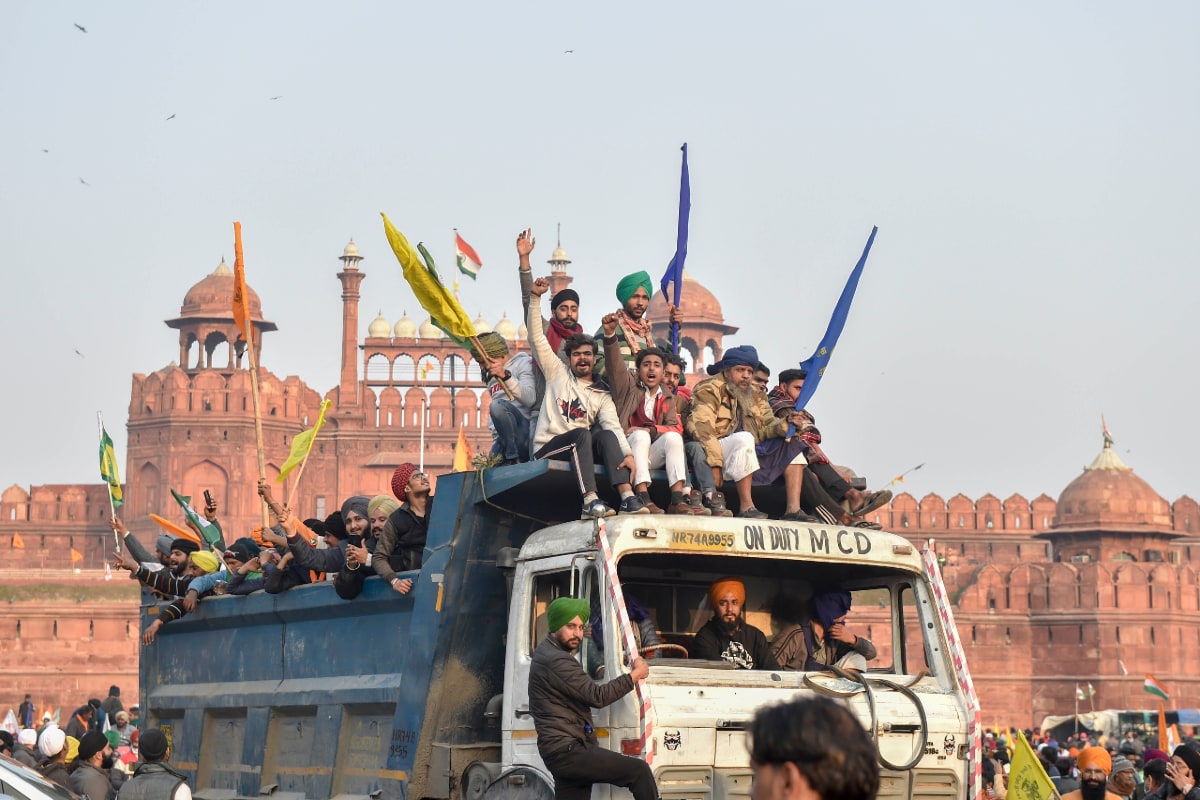 Tens of thousands of farmers broke barriers to storm the national capital on Tuesday, their tractor parade to highlight their demands dissolving into unprecedented scenes of anarchy as they fought with police, overturned vehicles and hoisted a religious flag from the ramparts of the Red Fort.

Later on Tuesday, an umbrella body of farmers’ unions called off the tractor parade in the aftermath of the violence in the national capital.

Clashes broke out at multiple places, leading to violence in well-known landmarks of Delhi and its suburbs amid waves of violence that ebbed and flowed through the day. While there were no exact estimates of how many farmers were hurt, Delhi Police officials said 86 of their personnel were injured through the day. Of these, 41 were injured at the Red Fort.

A protester died after his tractor overturned near ITO, one of the major flashpoints of trouble. In a statement, the police said protesting farmers violated the conditions agreed on for their tractor parade.

â€œThe farmers began the tractor rally before the scheduled time, they also resorted to violence and vandalism,â€ said Delhi Police PRO Eish Singhal. â€œWe followed all conditions as promised and did our due diligence but the protest led to extensive damage to public property.â€

Farmers, atop tractors, on motorcycles and some on horses, broke barricades to enter the city at least two hours before they were supposed to start the tractor march at noon sanctioned by authorities. Steel and concrete barriers were broken and trailer trucks overturned as pitched battles broke out in several parts of the city. As tension spiralled, a home ministry official said additional paramilitary troops will be deployed. The exact number of additional troops was not known immediately but officials suggested it could be around 1,500 to 2,000 personnel (about 15 to 20 companies).

The decision was taken at a high-level meeting chaired by Union Home Minister Amit Shah. Hoping to curb the violence, the ministry also decided to temporarily suspend internet services in parts of Delhi, including Singhu, Ghazipur and Tikri and their adjoining areas, for 12 hours from Tuesday noon.

Eclipsing the traditional show of military might at Rajpath, the farmers’ tractor parade that was supposed to be peaceful led to chaos on the streets and never-before scenes the most perhaps being the sight of protesters clambering up the flagpole at the Red Fort to hoist the Nishaan Sahib’, the Sikh religious flag.

Farmer leaders, who have been spearheading the protest at Delhiâ€™s border points to demand a repeal of the farm laws, dissociated themselves from the protests. The Samyukta Kisan Morcha, an umbrella body of 41 farmer unions, formally called off the tractor parade and appealed to farmers to return to their respective protest sites. The Morcha also alleged that some â€œantisocial elementsâ€ had infiltrated their otherwise peaceful movement. In a statement, it also condemned and regretted the “undesirable” and “unacceptable” events as the parade turned violent after several groups of farmers deviated from the pre-decided route for the march.

Read more: High Alert in Haryana and Punjab after Violence in Delhi During Farmers’ Tractor Parade

At the Red Fort, thousands of farmer barged into the complex after they were pushed back from ITO. The protesters were removed from the premises by the police later and some returned towards the evening. Videos from the spot showed angry crowds armed with sticks and clubs chasing police personnel. As they ran from the crowds, some policemen fell off the high fort walls.

The tension was mirrored elsewhere in the city as well. Police baton charged farmers at Chintamani Chowk in Shahdara when they broke barricades and smashed window panes of cars. A group of ‘Nihangs’ (traditional Sikh warriors) clashed with security personnel near Akshardham Temple. At Nangloi Chowk in west Delhi and at Mukarba Chowk farmers broke cemented barricades and police used tear gas to disperse them.