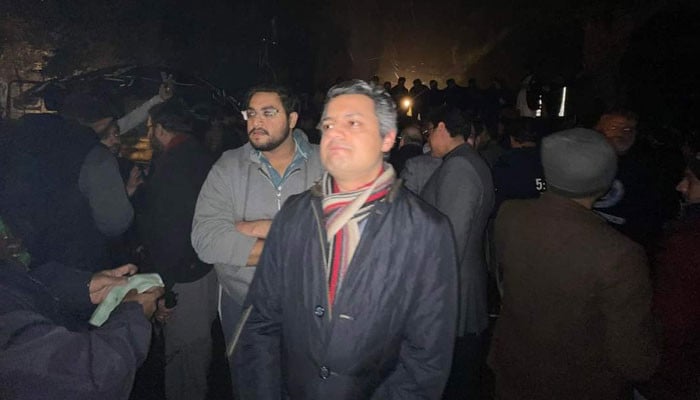 Pakistan Tehreek-e-Insaf (PTI) leader Fawad Chaudhry was arrested from his residence early Wednesday hours after he condemned the government for hashing out what he called a conspiracy to arrest Imran Khan.

The Islamabad police have confirmed the arrest. A case against Chaudhary was registered last night at the Kohsar police station in Islamabad on the complaint of Secretary of the Election Commission Umar Hameed. The FIR was lodged against him for using threatening language against the ECP and its members.

In his speech outside Imran Khan’s residence in Lahore, Fawad warned the Election Commission, its members and their families, according to the FIR.

The FIR states that Chaudhary said that the status of the election commission was reduced to that of a ‘Munshi.’

PTI leader Farrukh Habib broke the news of his arrest on his Twitter handle. The arrest of Fawad comes in the midst of a large gathering of PTI workers who rushed to party chairman Imran Khan’s residence to ensure that he is not arrested.

“The imported government has gone berserk,” Habib said in a tweet. The PTI leader also posted videos on social media of police whisking away Fawad.

The Islamabad police sources said the PTI leader was arrrested from his residence near Thokar Niyaz Baig. He would be taken to the federal capital, the sources said.

“Pakistan has become a lawless state at the hands of these lawbreaking lawmakers and corrupt law enforcement officers,” he tweeted.

As rumors of an impending arrest of Pakistan Tehreek-e-Insaf (PTI) chief, Imran Khan, circulated in the early hours of Wednesday, party leaders and workers, in large numbers, descended upon his residence in Lahore’s Zaman Park.

Meanwhile, the PTI announced on its official Twitter handle: “There are reports that the puppet government will try to arrest Imran Khan tonight.”

Raising slogans in support of Imran Khan, his fervent supporters voiced their anger and pledged their unwavering loyalty to their leader, even if it meant putting their own lives on the line.

Speaking with the press earlier in the night, Fawad Chaudhry, vehemently denounced the government’s actions, calling it a nefarious plot to destabilize the country. He went on to call those involved in the supposed conspiracy as traitors.

“If the police have courage and audacity, they should come and arrest Imran Khan,” Chaudhry said.

Another party leader, Hammad Azhar, claimed that the government was actively working to create an environment for Khan’s arrest. Accordingly, the party has taken measures to ensure their leader’s safety, he said.

In a bold warning, Azhar declared that no one holds the power to arrest Imran Khan.