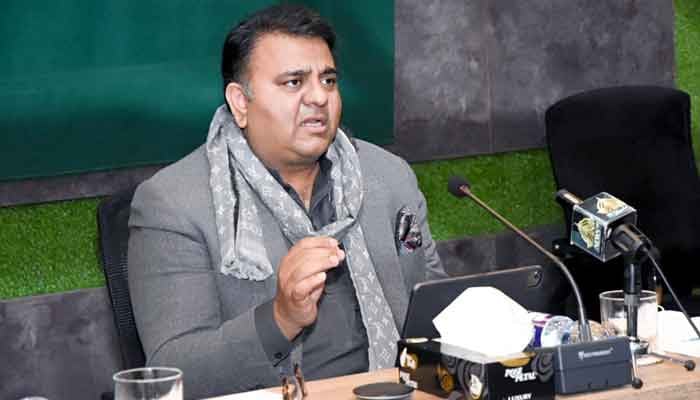 ISLAMABAD: Leader of the Opposition in the National Assembly Shahbaz Sharifâ€™s case should be broadcast live for the public to see,Â  Federal Minister for Information and Broadcasting Fawad Chaudhry said on Monday, adding that the government had requested the Chief Justice of Pakistan in this regard.

“The government wants the public to witness what evidence Shahbaz produces in the court proceedings to prove his claimed innocence,” the minister said addressing a press conference in Islamabad.

Speaking about the attorney-general of Pakistanâ€™s (AGP) letter to Shahbaz, he said that Shahbaz has been asked to report to the committee formed to monitor PML-N supremo Nawaz Shahbazâ€™s case, explaining to them the reasons behind the delay in his return.

â€œThe Sharif brothers â€” Nawaz and Shahbaz â€” used to say that the Pakistani law does not apply to their children,â€ he said, adding that if the allegations against them are false, they should be acquitted.

The minister added that recovery from them is â€œvery importantâ€.

Taking a jibe at the PML-N leaders, Fawad said that a child in their family is born later but a palace on his/her name is bought beforehand.

‘Daily court proceedings should be held against PPP leaders’

â€œThe Sindh government did not participate in reforms,â€ he said, complaining that it has deprived its citizens of basic facilities, like health cards.

Fawad further added that the provincial government is not providing its capital Karachi with its due share in resources.

â€œUnder National Finance Commission (NFC), funds will be transferred to provinces from the Centre which will then be transferred to the districts,â€ he mentioned, adding the Sindh government has deprived its citizens of this right.

The minister said: â€œPrime Minister Imran Khan had put an end to corruption by introducing the local government system.â€

Speaking about the PPP, Fawad said that former president Asif Ali Zardari and Company has also looted billions of rupees and recovery from them is also very important.

â€œDaily court proceedings should be held against them as they have looted the money of Pakistanis,â€ he said.

The minister further added that the whole world is now following Pakistanâ€™s strategies in its fight against COVID-19.

â€œOur economy grew during the pandemic; although the country has witnessed inflation, it should be noted that revenue has also increased during this period,â€ he said.

â€œPakistan is moving in the right direction,â€ he added.

Shedding light on the challenges faced by the incumbent government, he said that when assuming power, the PTI found the country in almost the â€œsame condition which it was in right after partition.â€

The attorney-general for Pakistan (AGP) on Monday wrote a letter to Shahbaz to bring back Nawaz.

The AGP has instructed Shahbaz to submit Nawazâ€™s medical reports within the next 10 days; in case he fails to do so, contempt of court petition will be filed against Shahbaz.Â

On November 16, 2019, the Lahore High Court (LHC) allowed Nawaz to go abroad for medical treatment, the letter read, mentioning that according to the doctors’ instructions, Nawaz was allowed to leave for four weeks.

The AGP also mentioned that according to media reports, Nawaz is in good health, while when he was leaving the country, his condition was described as critical.

“After reaching London, Nawaz did not stay in the hospital for a single day and remained involved in his political activities,” the letter stated.

The AGP highlighted that the affidavit and the court order was “violated as Shahbaz did not submit Nawazâ€™s medical reports.”

The attorney-general further wrote that before approaching the LHC in this regard, he has contacted the PML-N president to submit the medical report.