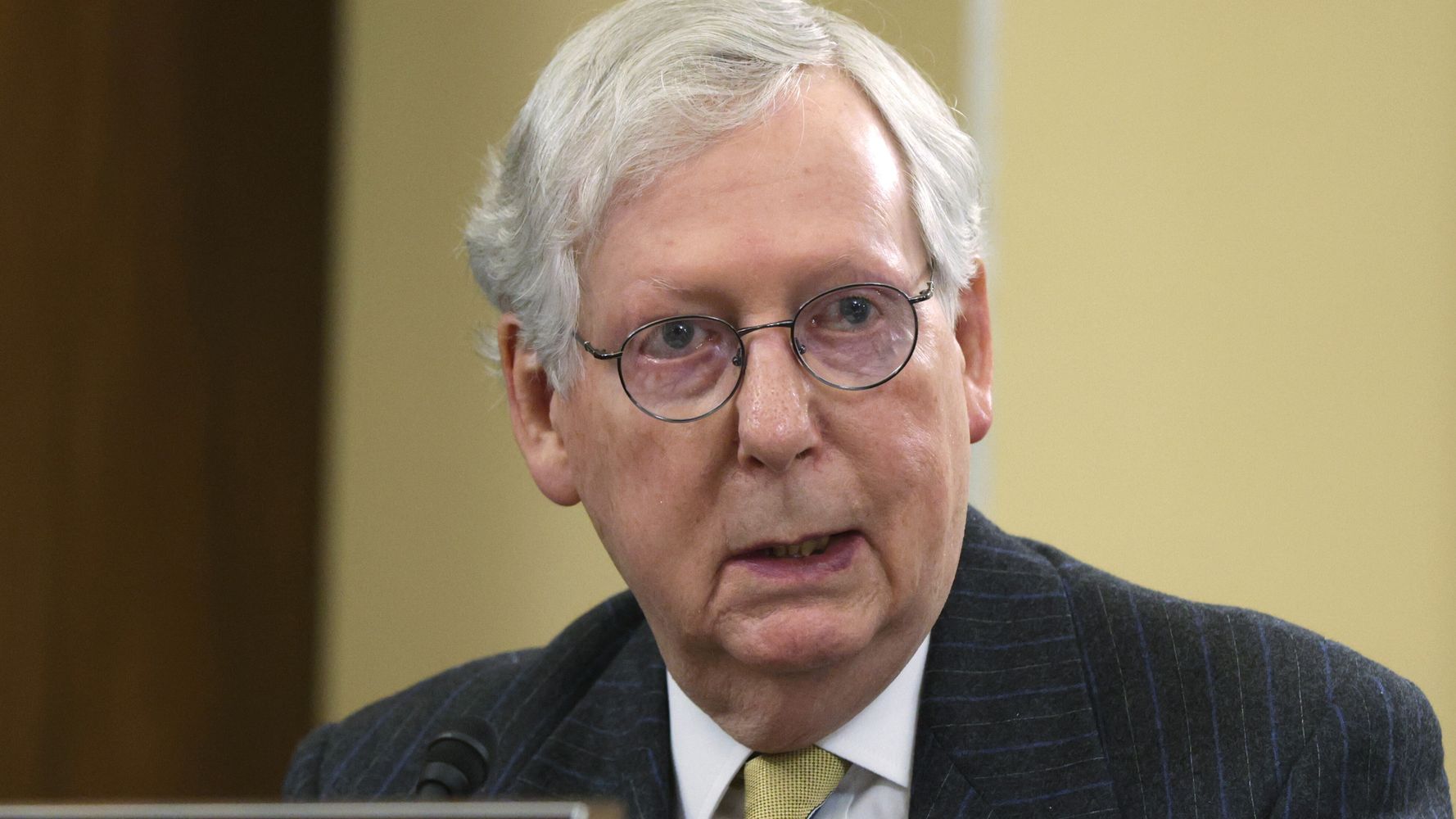 The Senate on Wednesday took its first step towardÂ an anticipated showdown over the chamberâ€™s filibuster rules as the Senate Rules & Administration Committee held the first hearing on a major voting rights, campaign finance, gerrymandering and ethics reform legislative package.

The For The People Act is the top legislative priority of congressional Democrats, and was introduced as the first bill in both the House and Senate. Its expansion of voting rights is touted as the most sweeping expansion on the issue since the Voting Rights Act of 1965. The House passed the bill early this month, with one Democrat joining all Republicans in voting no.

But in the Senate, Democrats are up against Republicans who insist that voting problems â€• including the slew of restrictions being pushed at the state level â€• donâ€™t exist at all. Without reform to the filibuster, a procedure that lets senators block legislation that holds less than 60 supporters, it doesnâ€™t stand a chance.

â€œStates are not engaging in trying to suppress voters whatsoever,â€ Senate Minority Leader Mitch McConnell (R-Ky.) said in testimony. â€œThis is a solution in search of a problem.â€Â

Thatâ€™s blatantly false. Republican-led state legislatures have passed numerous voting restrictions over the past decade, and a record number of new restrictions are currently under consideration.

Republicans in state legislatures have introduced 253-plus bills to restrict voting access.Â Sen. Roy Blunt (R-Mo.), the committeeâ€™s ranking member, claimed the threat of voter restrictions posed by these bills was a â€œfalse narrative in my viewâ€ because they have not all passed yet. However, they are all in the works.Â

The push to expand voting rights also comes on the heels of the Jan. 6 insurrection at the U.S. Capitol, which was fomented by former President Donald Trump and other Republican officials lying about nonexistent election fraud. There are pending voting restrictions in states that Trump falsely claimed he won, including Arizona and Georgia.

Democrats likened these restrictions to past efforts to keep Black people and other marginalized groups from voting.Â

â€œOur country has come a long way supposedly since African-Americans were forced to guess the number of jelly beans in a jar in order to vote,â€ Senate Majority Leader Chuck Schumer (D-N.Y.) said in testimony. â€œBut some of these voter suppression laws in Georgia and other Republican states smack of Jim Crow rearing its ugly head once again.â€

The bill contains provisions mandating states provide no-excuse absentee voting and at least 15 days of early voting and provisional ballots, and it says states need to automatically register voters when they interact with a state or local government agency (unless they choose to opt out), while also providing the option of online and same-day registration. The bill also limits states from implementing mass voter roll purges and voter identification laws, and it restores voting rights to people convicted of felonies upon release from prison in states that ban them from voting.

It would also require states to use independent panels or nonpartisan criteria to draw congressional districts, create a voluntary system to publicly finance congressional elections, require currently undisclosed election-related contributions of $10,000 or more to be disclosed, mandate that digital platforms disclose political advertising and create new ethics requirements for executive branch officials and the Supreme Court.

Sen. Amy Klobuchar (D-Minn.), the committee chair and one of two lead sponsors of the bill, fired back at McConnell over charges that the bill would create chaos in future elections. McConnell cited provisions, which were pointed out last week in aÂ Daily Beast opinion piece, that would require states to purchase voting machines that do not yet exist and create telephone-based voter registration systems. He warned the bill would create an â€œimplementation nightmare.â€ (The Senate version of the bill does not contain the requirement for states to create telephone-based voter registration systems.)

â€œRepublicans are talking a lot about chaos,â€ Klobuchar said. â€œIâ€™ll tell you what chaos is.â€

Chaos, she said, is â€œforcing people in Wisconsin to stand in garbage bags in the rain waiting in line just to exercise their right to vote.â€ Itâ€™s purging of tens of thousands of eligible voters from voter rolls ahead of elections in Georgia. Itâ€™s only allowing there to be one absentee ballot dropbox per county in Texas and implementing a voter identification law in North Carolina that a circuit court said was crafted with â€œsurgical precisionâ€ to target Black voters.

â€œAnd chaos is what we saw happen at the Capitol when people heard for an entire year that our election isnâ€™t sound and they decided to come here and take it under their own hands,â€ Klobuchar said. â€œThat angry mob? That was chaos.â€

Similar divisions between the parties emerged as the committee discussed the billâ€™s campaign finance provisions.

Republicans denounced provisions to expand disclosure of contributions to independent groups free to spend corporate money after the Supreme Courtâ€™s 2010 Citizens United decision, calling them an improper invasion of privacy. The bill would only require previously undisclosed donations of $10,000 or more to nonprofit groups spending money on federal elections to be disclosed. Republicans also complained that taxpayers will have to pay for political speech that they disagree with, although the public financing provision is funded through a fee added to corporate fines levied by regulatory oversight agencies.

As it stands now, the bill would need to receive 60 votes to pass the Senate. Sen. Joe Manchin (D-W.Va.) is the only member of the Senate Democratic caucus who has not co-sponsored the bill, although he did co-sponsor the 2020 version of it. Manchin expressed hope for a bipartisan deal, but told HuffPost that Congress â€œshould not at all attempt to do anything that will create more distrustâ€ in the nationâ€™s elections.Â

An increasing number of Democratic senators â€”Â including the billâ€™s sponsors, Sens. Jeff Merkley (D-Ore.) and Klobuchar â€” are pointing to the For The People Actâ€™s voting rights provisions as something that should not be held hostage by the Senateâ€™s filibuster rules.

Even centrist senators who fiercely have defended the filibuster in the past are cracking open the door to rule changes, warning that continued obstruction will push them over the edge toward nuking the filibuster.

â€œIf Republicans use this extraordinary tool responsibly and prudently and enter into negotiations on some of these important issues, then thereâ€™s no need to change the filibuster,â€ Sen. Angus King (I-Maine), who caucuses with Democrats, told HuffPost. â€œIf they just say no, we donâ€™t even want to talk about whatever it is, then the case for doing something about the filibuster becomes stronger.â€

The bill will continue to move through the normal committee process. Klobuchar intends to hold a mark-up session on the bill to address any problems and sticking points, including those raised around particular election administration questions. The bill, which already contains different language than the House-passed version, will likely be amended by a managerâ€™s amendment in committee before it heads to the floor.

Klobuchar and Merkley both say they want to see the bill brought to the Senate floor for a vote, possibly with a rule allowing open amendments.

â€œEverything is on the tableâ€Â to pass the bill if Republicans decide to filibuster it on the floor, Schumer said last week.Â