First The Great Resignation, Now A Summer Of Strikes. What Next For Work? 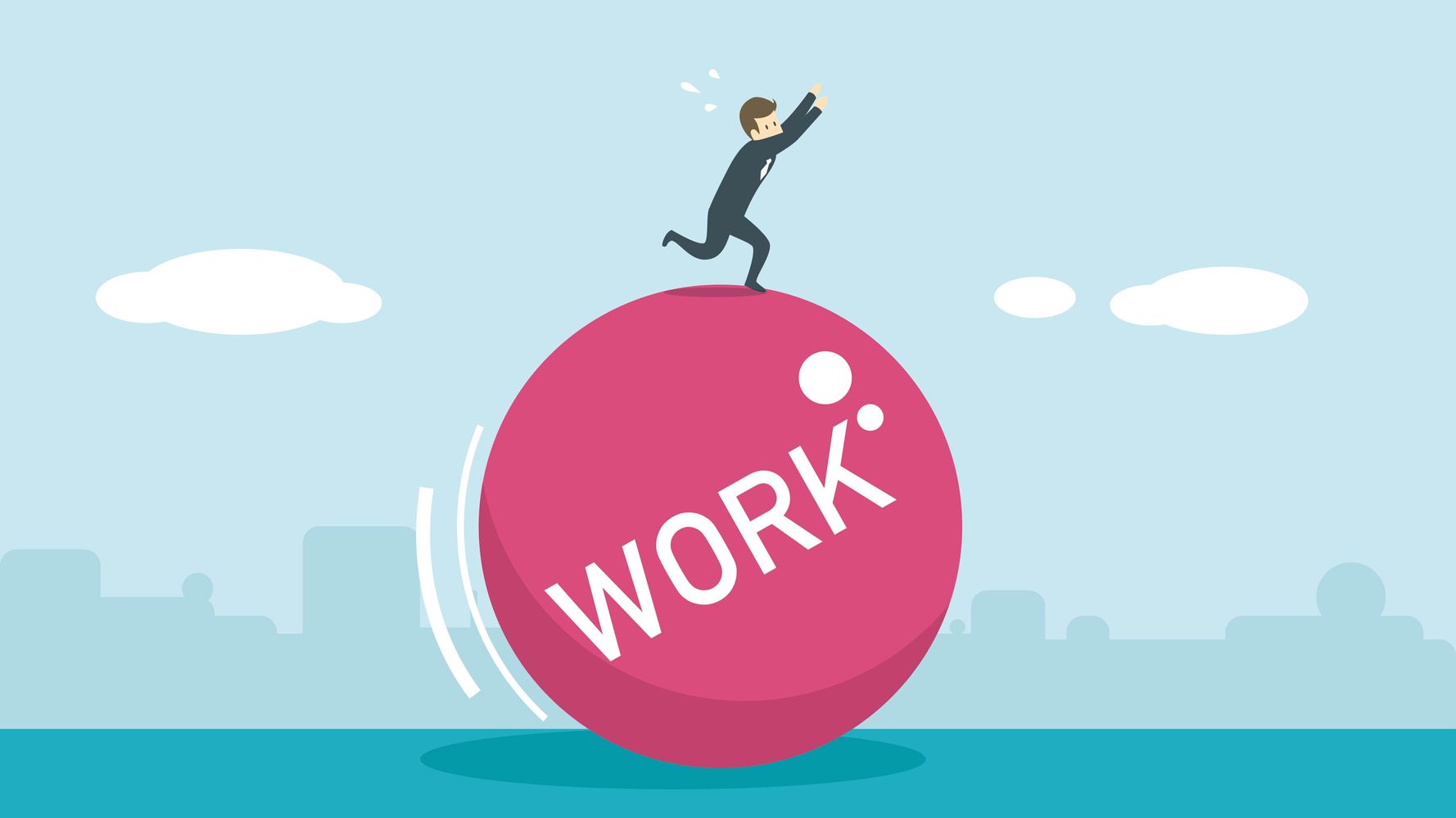 You’re reading Life-Work Balance, a series aiming to redirect our total devotion to work into prioritising our personal lives.

Everyone seems to be quitting. Boris Johnson. A fair chunk of the Tory party (for a day or two, at least). Your fave work pal. Some 4.5 million Americans, and nearly a million Brits. When Beyonce sang “release your job”, she might have forgotten the power she holds.

Coming out of the first wave of the pandemic in 2021, we saw a phenomenon dubbed The Great Resignation, which saw millions of people abandon the workforce after reappraising their life priorities during the Covid crisis.

As many as 6.5 million Brits are planning to quit their job in the coming months according to the Chartered Institute of Personnel and Development – that’s a fifth of the workforce.

And now, in this long hot summer, we’re seeing workers saying no to unfair conditions, low pay, and toxic work environments – this time with strikes.

Industrial action has already hit the travel, transport and legals sectors this summer and there is talk of further strikes from teachers, postal workers, bus drivers and bin collectors, even doctors.

We’ve had the Great Resignation. Are we now heading for a General Strike?

Anti-work sentiments are certainly catching on. As GQ magazine observered recently, Beyonce might be the latest to offer an anti-work anthem, but these feelings have been festering for some time.

Popular culture certainly seems to be propelling us towards an anti-capitalist, collapsed status quo with a big middle finger up to the powers that be, rather than the aspirational American dream of yesteryear.

Consider the Oscar winning films, Parasite, a literal upstairs-downstairs tale of South Korean haves and have-nots, and Nomadland, which chronicled the life of a seasonal Amazon worker, not to mention Sorry to Bother You, which highlights the banality of call-centre work.

On the TV side, audiences have been glued to Severance and Netflix’s Squid Game, shows that followed the likes of The Hunger Games franchise and The Handmaid’s Tale in their questioning of authority and the ruling class.

Of course, while these cultural offerings document the struggles of surviving under capitalism, and the intricacies of work under capitalist structures, as fantastical non-fictions they fail as perfect panaceas to the problem – you can’t kill your boss to gain autonomy in the real world!

Nor can we ignore that many are created by and platformed on models of capitalistic endeavour. Apple, Netflix and Amazon are all mammoth brands chasing competition and profit margins, often at the cost of their workforce.

Yet, they still land with us. And these cultural moments are effective in changing perception about the nature of work and wealth inequality, maybe even giving rise to bubbling resentment towards the powerful in our own lives.

Professor Teena Clouston, from Cardiff University, who works in occupational therapy and wellbeing, says while the initial exodus of the Great Resignation was partly a response to the pandemic, the movement stems from issues that well preceded it – issues that don’t seem solvable under the current system.

“The winds of change with regard to the Great Resignation, or perhaps reappraisal, were evident before Covid,” she tells HuffPost UK.

“Staff began to experience a growing realisation that they wanted to work in a place that was aligned with their personal values and integrity, prioritised their wellbeing, and wanted to nurture growth in terms of finding and maintaining a sense of purpose and meaning in life.”

If this stance can be described as anti-capitalist, Clouston says, “frankly, it is not a bad thing; quite the contrary. Karl Marx highlighted the invidious nature of capitalism, describing it as alienating workers through the development of market forces and bastions of power, held by the few, not the many.”

And this seems to have endured into contemporary neoliberal capitalism, in which workers are disempowered, and in increasingly difficult conditions. If people want to withdraw their labour in order to make some noise and instil changes, they should, says Clouston.

“Surely the nature of work does need to be reappraised; and if that means a mass exodus and a modification of the capitalist ideal to achieve a more ethical, or simpler and meaningful lifestyle that is sustainable, then so be it,” she says.

We can look to history if we are indeed headed towards the possibility of a general strike as Clouston reckons we may be. The only ever General Strike to take place in Britain occurred in May 1926, called by the Trades Union Congress and it lasted nine days.

British workers coordinated a walk-out in protest of poor working conditions and lessening of pay (sound familiar?). With millions of workers joining the nine-day long protest, it became the biggest industrial action in history.

Sadly, the previous General Strike resulted in fews changes. But with a distance almost a century, evolving technologies to mobilise quick support, could we find more success in another effort? Mike Lynch, general secretary of the RMT union during this summer’s rail strikes, has called for all British workers to follow suit in asking for better pay and conditions – and people just might just do so.

I can feel strike girl summer is coming 🪧🌹✈️

Trade unions and strike action are the reason we have sick pay, minimum wage agreements, workplace safety, and parental leave.

The rightwing press want to ban strikes because they work! https://t.co/yj6t6GWZxQ

With rail workers striking for better pay and working conditions, airline staff planning action to contest (and disrupt) the untenably busy summer holiday season, and even Tory MPs resigning from their positions to challenge the PM, more of us are realising that refusing to work could just be our biggest power.

Seeing these examples could mobilise the average worker who is unhappy with their situation, but these movements pick up even more momentum when they seep into popular culture and the art – as with Beyonce’s summer anthem, Break My Soul.

“Artists and creatives are fundamental to political transformation,” says Shana L. Redmond, professor of English and comparative literature at Columbia University, who adds that the words of anarchist feminist Emma Goldman – “If I can’t dance, I don’t want to be in your revolution” – spring to mind.

“Goldman’s goal, as [African American writer] Toni Cade Bambara argued, is ‘to make revolution irresistible’ and music (in particular) is how you not only draw people in but how you keep them,” says Remond.

“We are only able to mount revolution if we are healthy and caring for one another holistically along the way.”

So while Beyonce might not be singing explicitly about the Great Resignation or can relate to the woes of a regular nine to five, her message of “release your job, release your time” does capture the growing anti-work mood of the moment – and beyond.

As Redmond sees it: “The anti-work expressions of recent times are important for establishing language that exposes jobs for what they are – ‘nothing but work’ – disrupting the trope of the grind and inexhaustible hustle for money, and tipping the discursive balance of power away from administrators, managers, executives, and owners.”

However, just because we’re waking up to the perils of work, doesn’t mean we’re necessarily challenging capitalism at large.

“I don’t hear Beyoncé’s song as anticapitalist,” says Redmond. “She’s speaking to difficult, unevenly precarious conditions that keep us tired and unhealthy, and that’s important. However, those conditions are symptoms. The disease of which we need cure is capitalism.”

We can turn to culture for escapism, but with growing examples of film, TV, and music that reflects the material conditions of work and our feelings towards it, we might see more people leveraging their labour to win the provisions they deserve: more pay, better conditions, and true life-work balance. In that order!

Life-Work Balance questions the status quo of work culture, its mental and physical impacts, and radically reimagines how we can change it to work for us.