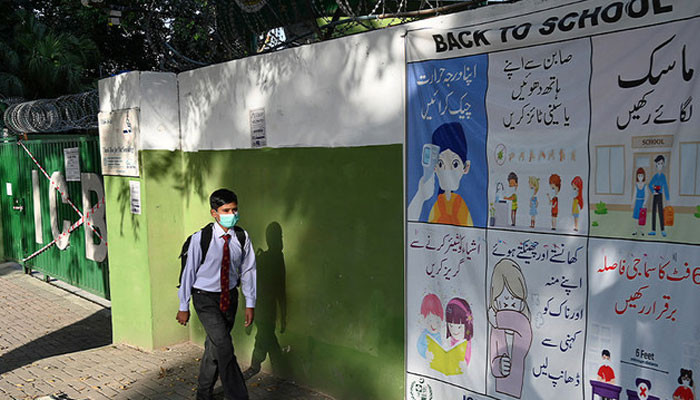 ISLAMABAD: The Islamabad district health officer (DHO) has recommended sealing five more schools after detection of COVID-19 among 15 persons, including staffers and students.

In a letter to the city administrant, the DHO suggested closing down the educational institutions immediately. The schools should be kept close till further directions, proposed the health officer.

It is pertinent to mention here that more than 21 COVID-19 cases have been reported from seven different educational institutions in the last three days in the federal capital.

Earlier today, the National Command and Operation Centre (NCOC) deferred the decision on the closure of schools in the country amid the fifth wave of coronavirus.

A statement issued after the NCOC meeting said, â€œDecision about education institutions will be taken on data of positive cases of various institutions for which massive testing in educational institutions is being carried out.â€

The NCOC discussed the epidemic curve chart data, national vaccine strategy and disease prevalence across the country and decided to implement new protocols in cities with a 10% and above positivity rate.

The provincial health and education ministers also joined the meeting virtually and informed about the steps being taken to implement non-pharmaceutical interventions (NPIs) and COVID-19 SOPs in the wake of a spike in coronavirus cases.

In addition, global and regional trends of the Omicron variant were also discussed during the session, which was convened after the national positivity ratio increased to an alarming level.

â€œKeeping in view new disease prevalence, a fresh set of NPIs was presented and discussed with provinces,â€ the NCOC statement said, adding the provinces will implement the new set of NPIs in the next 48 hours after the consultative process with all stakeholders.