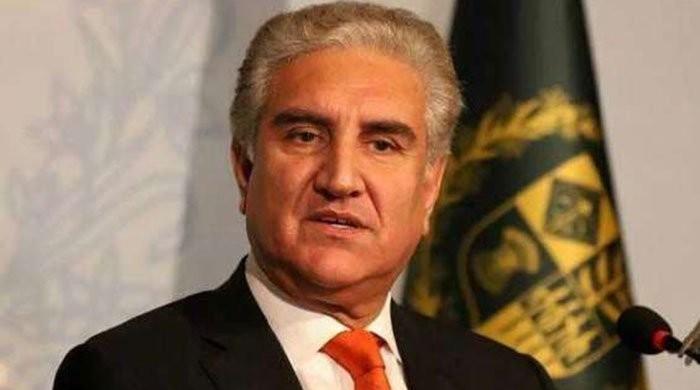 ISLAMABAD: Foreign Minister Shah Mahmood Qureshi condemned the ‘harassment’ that Pakistani diplomats were facing in India, saying that New Delhi was attempting to deflect the world’s attention from its ongoing border dispute with China to Pakistan.Â

Speaking to Geo Pakistan on WednesdayÂ , Qureshi spoke about India’s move to tell Pakistan’s diplomatic staff in New Delhi to slash its presence by 50% on charges they had violated the Vienna Convention.

“India’s mood is clear [for all to see] as it wants to divert attention from its border dispute with China to Pakistan,” said the foreign minister, adding that India was finding excuses to launch a false flag operation against Pakistan.

“The opposition in India is raising questions that their government can’t answer,” he said, referring to the criticism being faced by the Modi government regarding its response to the border dispute with China in which 20 Indian soldiers were killed.

Stating that India had posed baseless allegations against Pakistani diplomats of spying in New Delhi, Qureshi said that the Pakistani staff was harassed in India and their cars were followed by authorities.

He said that Pakistan had not only condemned the allegations but also rejected them. The foreign minister added that the Indian ChargÃ© dâ€™ Affaires in Islamabad was summoned and told that the same treatment would be meted out to the Indian staff.

“We told him [Indian ChargÃ© dâ€™ Affaires] that because of this unilateral policy, you also wrap up and slash your [diplomatic staff] presence by 50%,” noted FM Qureshi.

In response to a question about a recent cabinet meeting where, according to sources, PM Imran told ministers they had till six months to perform, the foreign minister refused to divulge any information.

Pakistan asked to cut embassy staff by half

On Tuesday, India had told Pakistan to slash its embassy staff in New Delhi by half â€” saying it would do the same in Islamabad.

“The behaviour of Pakistan and its officials is not in conformity with the Vienna Convention and bilateral agreements on the treatment of diplomatic and consular officials,” the Indian MEA had said in a statement.

“Therefore, the government of India has taken the decision to reduce the staff strength in the Pakistan High Commission in New Delhi by 50%.”

The fractious relationship between India and Pakistan has worsened since New Delhi expelled two Pakistan embassy officials over spying allegations in late May.

Pakistan had condemned the Indian governmentâ€™s decision as part of a â€œpersistent anti-Pakistan propagandaâ€.

According to a Foreign Office statement, Indiaâ€™s decision to declare two officials of the High Commission for Pakistan in New Delhi â€œpersona non grata requiring them to leave India within 24 hoursâ€ was accompanied by a â€œnegative pre-planned and orchestrated media campaign, which is a part of persistent anti-Pakistan propagandaâ€.

It added that two staff members of the Pakistan High Commission in New Delhi were â€œlifted by the Indian authorities today (31 May 2020) on false and unsubstantiated chargesâ€.

The incident occurred last week when Islamabad Police had arrested the two Indian officials for attempting to flee after running over a man and critically injuring him.

Islamabad police later said both Indian High Commission officials were released due to their diplomatic immunity and had been handed over in the presence of Pakistani ministry’s officials.

A case had earlier been filed against them in the Secretariat Police Station, with charges of negligence, reckless driving, and overspeeding.

The FIR stated that counterfeit currency worth Rs10,000 was also recovered from the Indian diplomats.