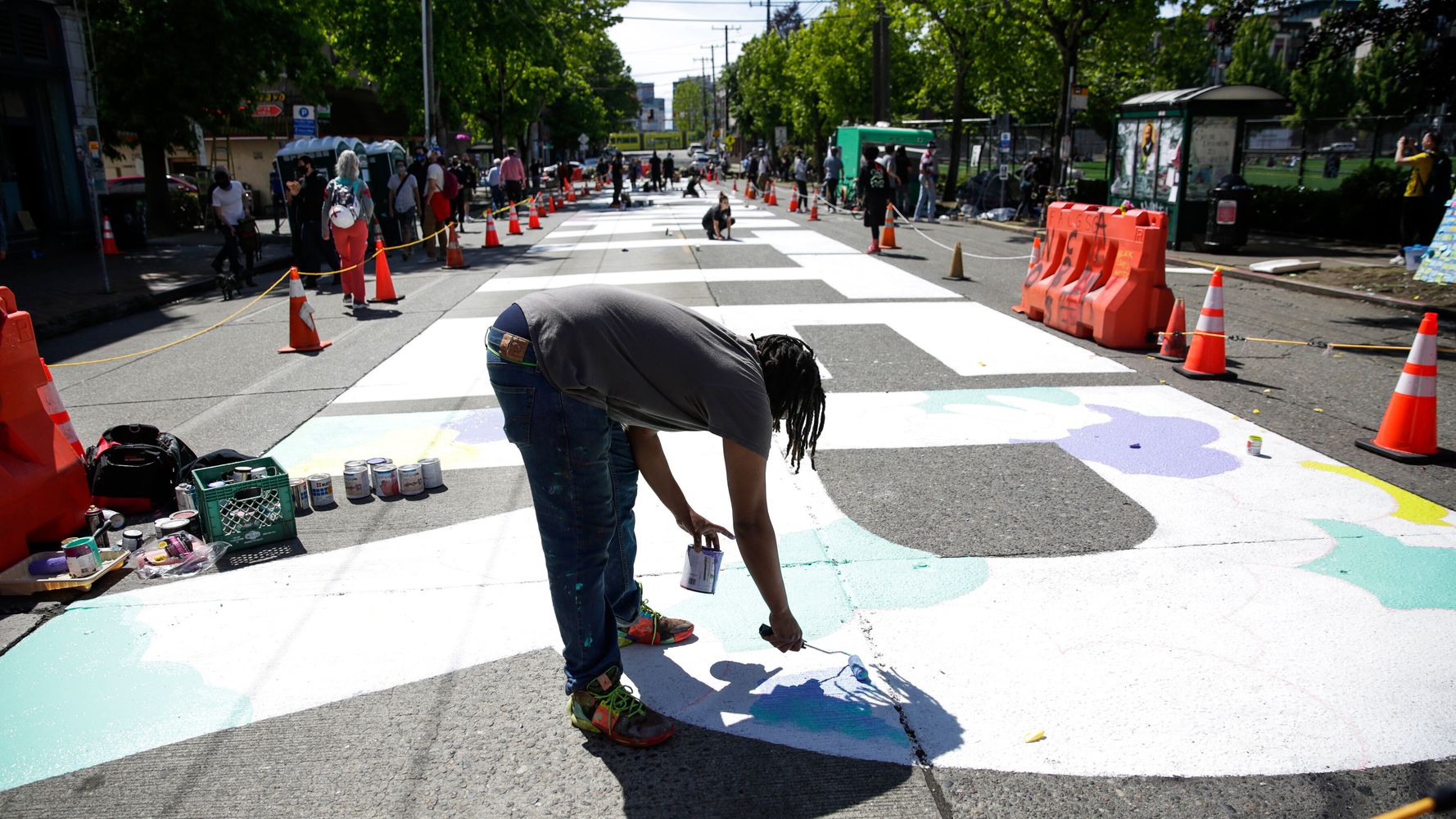 SEATTLE â€” On Fox News, host Tucker Carlson called it â€œchaos and craziness.â€ Laura Ingraham said it was â€œa Marxist cultural revolutionâ€ intended to â€œdestroy everything that came before it.â€ In a tweet, PresidentÂ Donald Trump said it was being run by â€œDomestic Terrorists.â€

These people are not describing a foreign war zone or a fallen city. They are describing the Capitol Hill Autonomous Zone, a roughly six-block area of Seattle taken over by protesters this week and declared a sovereign territory. Since the zone was established Monday, the internet has been filled with rumors about what it looks like and how it works. Fox News posted a photo of an armed guard at the entrance to the zone and said residents were being forced to show their IDs to get inside. Seattle Police Chief Carmen Best claimed that protesters were shaking down businesses for protection money. Something something Antifa something, cried various online pundits.

The antifa #CapitalHillAutonomousZone in Seattle has a subreddit set up. They are posting about making homemade chemical weapons, maintaining supply lines, & how to use those armed with guns to push police back. #antifa @FBISeattle pic.twitter.com/gDub2G49KU

All of these rumors are false, and all of these people are lying to you. I live less than a mile from the autonomous zone. I have been there every day this week, in daylight and in darkness, speaking with protesters, meeting with friends, seeing movies and eating pizza.

Donâ€™t believe the right-wing hype. The Capitol Hill Autonomous Zone is just the latest in a series of cities demonized in right-wing media with no regard to the circumstances on the ground. In the early 2010s, Rush Limbaugh, Bill Oâ€™Reilly and other conservative pundits spread the rumor that Dearborn, Michigan, had converted its legal system to sharia law. Since then, Fox News and other conservative outlets have aired warnings of â€œno-go zones,â€ neighborhoods of European capitals so overwhelmed with immigrants and crime that police officers have abandoned them.

These overblown stories have been debunked, but conservative pundits are attempting to run the same playbook. Fox News even Photoshopped an armed guard into otherwise benign pictures to make the zone appear more threatening.

Take it from me: Capitol Hill is still a functioning neighborhood â€” as functioning as it can be in the midst of a global pandemic, anyway â€” and has not suspended the rule of law or the norms of civilization.Â

The Autonomous Zone Is Pretty Chill

The CHAZ is the most vibrant public space in Seattle. On a recent afternoon, sunny for the first time in days, families decorated the letters of a giant â€œBlack Lives Matterâ€ mural painted on the street. A pair of women wandered through the crowd handing out free, handwoven face masks. On a corner somewhere nearby, a man in his 60s played a Marvin Gaye song on an electric keyboard.

Thatâ€™s not to say that the farmers market vibe detracts from the fundamental purpose of the zone â€” to eradicate radicalized police brutality. Signs featuring the names of Black victims of police violence are everywhere. â€œFuck 12,â€ â€œACABâ€ (all cops are bastards) and anarchy signs are graffitied onto every flat surface. Outside the police precinct on the corner of Pine Street and 12th Avenue, a middle-aged Black man with a microphone is describing what it felt like to be beaten by six cops after they accused him of stealing a pack of gum.

The autonomous zone was established here, around the East Precinct, after more than a week of nonstop protests. Since June 1, the first day of nationwide unrest following the Minneapolis police killing of George Floyd, the Seattle Police Department has steadily eroded its credibility by brutalizing peaceful protesters and retaliating against people who documented acts of police violence.Â

On June 7, police arrested a man who had taken a video of an SPD officer dousing a 9-year-old with pepper spray at the first dayâ€™s protest. Police claimed the man had â€œunlawfully dischargedâ€ a laser pointer. They also arrested (and pepper-sprayed) a woman in front of her children four days after she had allegedly attacked police at a protest. The charging documents, among other things, cited the fact that she had posted anti-police â€œStar Warsâ€ memes to social media.

There was also the near–dailyÂ footage of police violence against peaceful protesters outside the precinct. In one incident, an officer tried to grab a pink umbrella from a protester. When she resisted, he sprayed her in the face with pepper spray. At one point, Mayor Jenny Durkan declared a moratorium on the use of tear gas. Just a few days later, police used tear gas on protesters, including a handful of City Council members and state representatives who were in the crowd. Durkan later clarified that police could override the moratorium if the chief deemed tear gas necessary to â€œprotect life and to end standoff situations.â€

â€œThe greatest perpetrators of violence in the autonomous zone was the Seattle Police Department,â€ said Shaun Scott, a community organizer and former City Council candidate who ran on a platform of, among other things, abolishing the police department.

But then, suddenly, all the chaos was over. On June 9, the police boarded up the windows and abandoned the East Precinct. Thatâ€™s when protesters took over the building, blocked off the surrounding streets and declared the autonomous zone.

Since then, protesters have released a set of demands, mostly organized around the principles of defunding the police, reallocating resources to social services and releasing protesters from jail without charge.Â

â€œEverything weâ€™re seeing from Fox News is intended to make us forget that there are specific political demands at the center of the autonomous zone,â€ Scott said.Â  Â

While itâ€™s not clear â€” by design â€” who is now in charge of the autonomous zone, various groups have organized public lectures, movie nights and ongoing negotiations with the police. A socialist member of the Seattle City Council, Kshama Sawant, has suggested converting the precinct into a community center.

And though supporters have intermittently shown up to patrol the zone carrying weapons, they have not checked IDs or carried out any harassment. Neither local journalists nor the Chamber of Commerce could confirm any reports of extortion payments.

As for the future of the zone, Scott said the cityâ€™s response will depend on how much local politicians buy in to the myth being spread by Fox News and other conservative pundits.Â

â€œThe police are coming back to reclaim the precinct, but the will of the people is pretty strong,â€ he said. â€œI hope weâ€™re able to hold on to it forever.â€