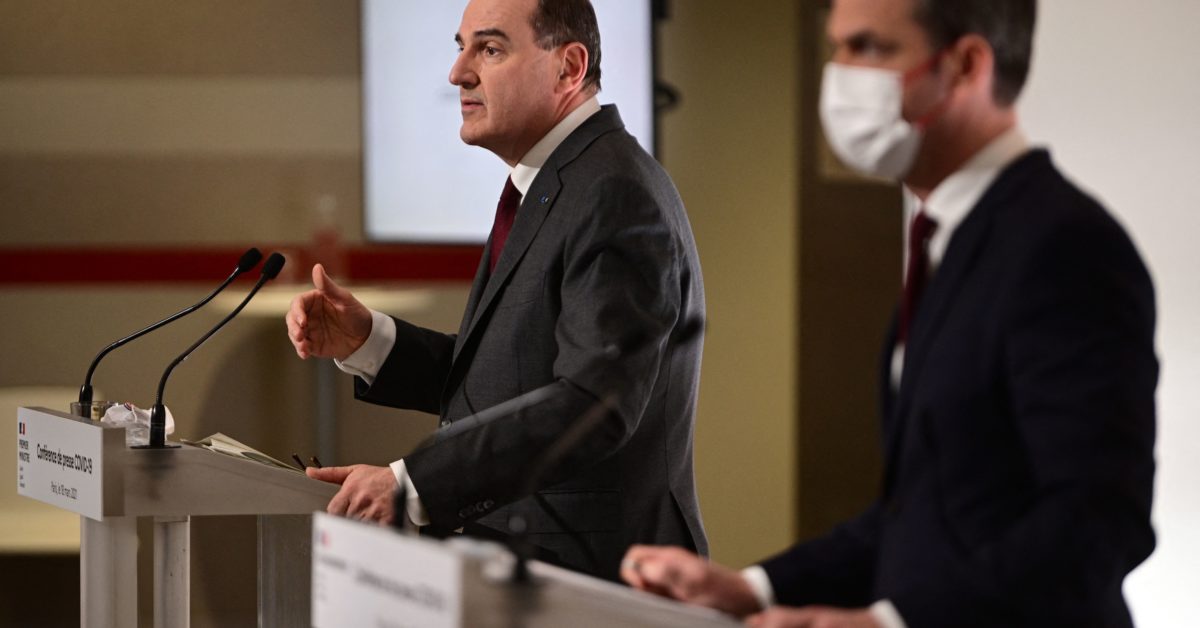 PARIS â€” French Prime Minister Jean Castex on Thursday announced that the Paris region, the northern Hauts-de-France region and several other departments in the south of France are going into lockdown for four weeks starting this weekend.

Macron had been keen to avoid the measure at all costs in bid to safeguard the social and economic life of the country.

â€œThe spread of the epidemic is clearly accelerating,â€ Castex told reporters on Thursday. â€œThis accelation appears to be a third wave just as we approach the terrible figure of 100,000 deaths.â€

The prime minister also announced that AstraZeneca vaccinations would restart as early as Friday afternoon following advice from the European Medical Agency that the vaccine was â€œsafe and effective.â€

The country has been on tenterhooks for days as the government hinted at new restrictions while seemingly struggling to make up its mind.

Castex was keen to avoid the word lockdown, highlighting the measures “will not be the same as the ones we imposed in March and November last year.â€

The new measures include closing non-essential shops, limiting travel to within 10 kilometers of homes and encouraging remote working. Long-distance travel from regions under lockdown to other regions will also be banned. Schools are to remain open, however, and walks and exercise will be allowed.

Last night, the number of COVID-19 cases reached over 38,000 in the last 24 hours, breaking a four-month record. This is up from close to 30,000 the previous day, after weeks where the daily case number hovered above 20,000.

The escalation of the COVID-19 epidemic comes at a difficult time for France. The use of the AstraZeneca vaccine was put on hold on Tuesday over concerns about blood clotting, and its vaccination programme is under fire for lagging behind its European counterparts.

Authorities are particularly worried about the situation of hospitals in the Paris region, where a quarter of the patients in intensive care are located. Currently, there are 25,000 COVID-19 patients in French hospitals.

â€œIntensive care units in Paris are overflowing,â€ says Prof. Gilbert Deray, head of the kidney unit at the PitiÃ©-SalpÃªtriÃ¨re hospital in Paris. â€œThe stress is extreme. Every day, we have 100 new patients admitted into intensive care, every day we are looking for beds, wondering where we are going to put patients.â€

â€œWe are on the cusp of a breakdown, and we are terrified that we might have to start choosing between patients,â€ he said.

Last week, in a bid to relieve pressure, Health Minister Olivier VÃ©ran announced that hospitals in the Ile-de-France would start transferring â€œdozens, even hundredsâ€ of patients to other regions to free up beds. So far, however, only 10 patients have been flown out, according to the regional health authority ARS, and planned train transfers have been cancelled.

â€œThe number of transfers is anecdotal. Only 10 percent of intensive care patients can actually be moved, and every time you have to get relatives to agree to moving an intubated patient on a ventilator some 600 kilometers away. The pictures look good on television but it wonâ€™t solve anything.â€

Macron was reportedly trying to avoid imposing a national lockdown, or even a weekend lockdown in the Paris region, up until Wednesday.

â€œPeople get home very late every evening, we canâ€™t lock them in from Friday evening to Sunday evening. Itâ€™s a life that is not possible,â€ he told local mayors, according to France Bleu.

Avoiding lockdown is a mainstay of Macronâ€™s management of the COVID-19 epidemic, often putting him on a collision course with representatives of the health sector â€” particularly when new, more contagious COVID-19 variants were spreading in France.

In February, Franceâ€™s top COVID-19 advisor, Prof. Jean-FranÃ§ois Delfraissy, warned that the government should copy the British in its fight against new variants. He argued that half-measures do not work and strict lockdown measures curbed the epidemic in the U.K.

It was advice Emmanuel Macron refused to follow at the time, arguing that the social and economic cost of a lockdown for the country was too high.

â€œItâ€™s a slap in the face for him, and shows that he was wrong,â€ he says. â€œThe government and the president put some spin on the decision not to lock down, saying he was the cleverest, better than the doctors, when the number of cases did not rise immediately.â€

Introducing even a partial lockdown shows, he says, that the storytelling was wrong.