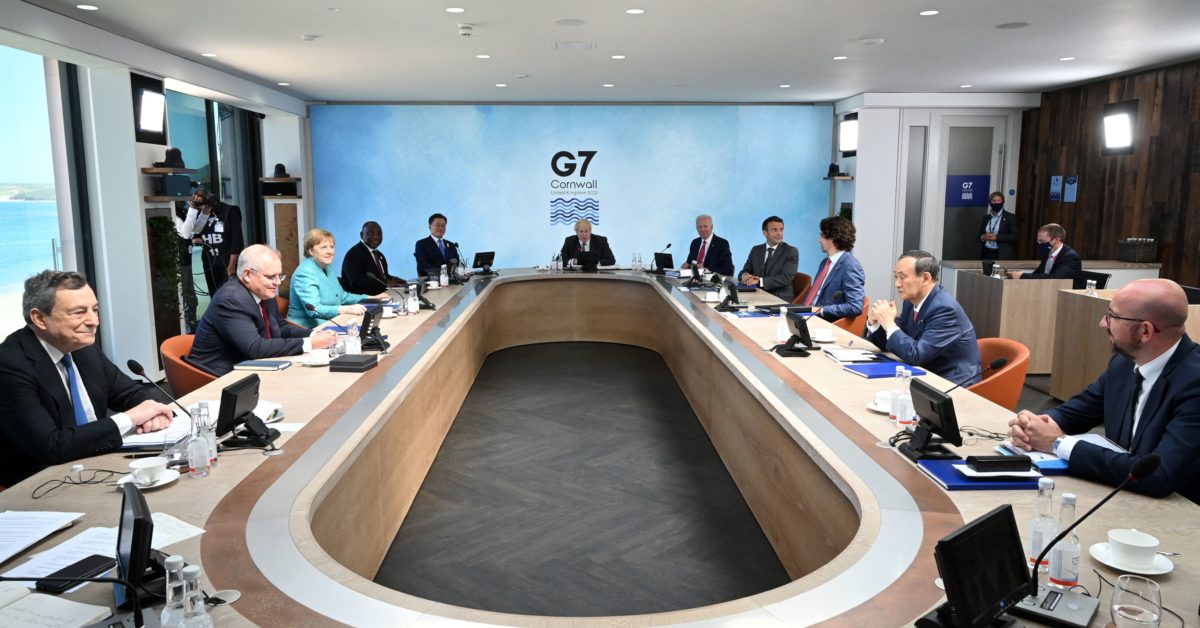 PLYMOUTH, England â€” The leaders of the Group of Seven wealthy democracies tussled Saturday over how explicitly to admonish China over human rights in an upcoming joint declaration.

In private meetings, public statements and background briefings with reporters, each country staked out its position during the second day of the annual G7 summit, held this year in southwest England.

The U.S. came out early, telling reporters it would make a priority of singling out Chinaâ€™s use of forced labor against the Uyghur and other minorities in Xinjiang in the text. And Canada publicly expressed the desire to list the names of two citizens that Beijing detained in retaliation for Canadaâ€™s arrest of a Huawei executive. Then, as the day wore on, EU officials questioned whether the framing should be about Chinaâ€™s violations specifically or forced labor more broadly, according to a senior diplomat involved in the talks.

It was a back-and-forth reflective of the divisive issue that China has become among western allies â€” even with what Europeans view as the welcoming presence of U.S. President Joe Biden â€” as the leaders grapple with the countryâ€™s ascendance as a geopolitical and economic counterweight to the democracies they represent.

â€œThis morning was to go a little bit deeper on some of the … more challenging elements within the G7 positioning on how hard to push and to call out some of the actions that China is taking,â€ said a senior U.S. administration official.

The final language will be unveiled on Sunday at the end of the G7 summit, the first held since 2019, after the 2020 gathering was canceled during the pandemic. And despite the varying positions, the ultimate text is likely to be the most extensive G7 language about China since President Xi Jinping became the Chinese leader in 2012.

Under discussion are two sections regarding China â€”Â one that could address human rights, and another that could offer countries funding alternatives to Beijingâ€™s so-called Belt and Road Initiative, a global infrastructure development project.Â

Itâ€™s the first section that has been a struggle for diplomats seeking consensus.Â

While the U.S. and its European allies agree on the need to aggressively address Chinaâ€™s human rights behavior â€” even jointly sanctioning the country in March over its treatment of the Uyghurs in Xinjiang â€” they have diverged on what rhetoric to use toward Beijing, sometimes because of differing economic considerations.

The EU, for instance, previously struck an investment deal with China, although it later put the agreement on hold amid rising tensions with Beijing.Â

According to the senior U.S. administration official, France is broadly supportive of singling out China over its forced labor practices, but EU, German and Italian diplomats were more hesitant.Â

German Chancellor Angela Merkel said discussions on China had been “very enthralling and interesting” and stressed her view that the G7 should seek to strike a balance.

“On the one hand, we know that the social systems of the G7 countries and China are different. We criticize the human rights issues in China, whether that’s Xinjiang or whether it’s the restriction of freedoms in Hong Kong. We also, of course, demand free access to international waters. Those are very important issues,” she said.

“On the other hand, we also have cooperative ties on many issues. I would like to mention, for example, climate issues and issues of biodiversity, but also free trade,” she told reporters Saturday evening.

Merkel said the G7 countries had all committed themselves to a “rules-based international and multilateral cooperation mechanism” in dealing with China, involving international organizations.

“The issue of forced labor will certainly be addressed, ” she added. She also defended the EU-China investment agreement, noting it referred to International Labour Organization core standards.

By the end of the day, a second U.S. official said the countries had bridged some of their differences on the communiquÃ© language without offering specifics. But in a statement, the official said there was “a growing convergence” among G7 countries on highlighting China’s “human rights abuses, including in Xinjiang.”

“Given some members didnâ€™t even want to mention China just three years ago, this is a huge shift in a short period of time,” the official added.

Another human rights issue in play is whether to name specific Beijing detainees in the communiquÃ©.

Canada has been pressing the issue, trying to include mention of both Michael Kovrig and Michael Spavor, who have been detained in China since late 2018.Â

â€œWestern democracies who are in the G7 should not be reluctant at all to pursue all those actions where it’s appropriate, even contesting,â€ Canadian High Commissioner to the U.K. Ralph Goodale told reporters on Friday.

Building back vs. Belt & Road

The seven countries are more in line on the other area: global infrastructure funding.Â

Diplomats are finalizing the wording of what theyâ€™re calling â€œBuild Back Better for the Worldâ€ (a nod to both Biden and Johnsonâ€™s domestic sloganeering). Itâ€™s an Initiative to free up hundreds of billions of dollars from both government and private industry for developing countries that might be inclined to take funding from China.Â

The G7 countries have criticized Beijing for driving countries into debt with its Belt and Road loan offers, depriving them of much of the benefit of any new infrastructure or economic investment.Â

The White House said it wants G7 countries to commit to a â€œhigher-qualityâ€ alternative to Belt and Road funding, offering investments that adhere to better climate standards and labor practices. It would be funded in part with existing U.S. contributions to overseas infrastructure financing through the World Bank and International Monetary Fund.

â€œThe United States and many of our partners and friends around the world have long been skeptical about China’s Belt and Road Initiative,â€ the second U.S. official said. â€œWe’ve seen the Chinese government demonstrate a lack of transparency, poor environmental and labor standards, and a course of approach that’s left many countries worse off.â€Â

The official added: “But until now, we haven’t offered a positive alternative that reflects our values, our standards, and our way of doing business.”

The White House declined to specify how much money the U.S. would contribute, saying it was still negotiating with other countries. It said the US already invests billions of dollars in overseas infrastructure financing and plans to work with Congress to do more.

While all sides are hammering out a final text, the other major player â€” Japan â€” made a veiled call on Europe to do more economically.

“With the European Union, we have helped with a number of their discussions on various issues such as the economic behavior, market distortion measures and also the economic assistance of China which are not compatible with international regulations,” Tomoyuki Koshida, the ministry of foreign affairs press secretary, told reporters. “It is our hope that Europe and Japan and other like-minded countries deepen such discussions in the future.”

Jakob Hanke Vela, Anna Isaac, Esther Webber and Rym Momtaz also contributed to this report, which has been updated with comments from Chancellor Angela Merkel.