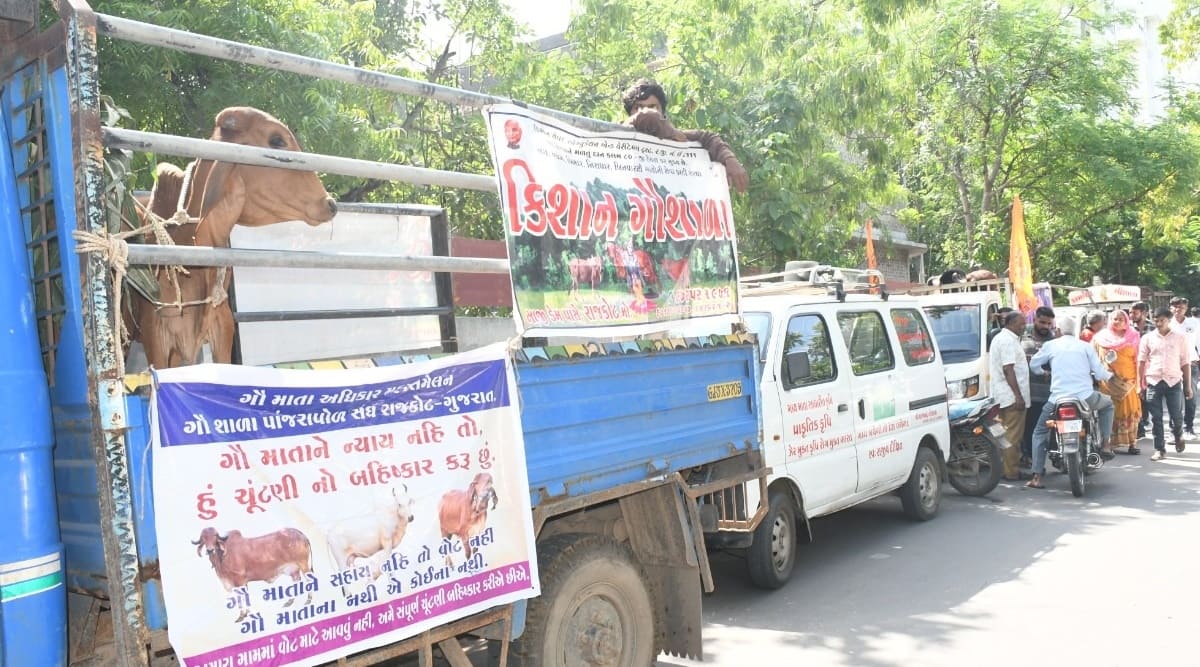 Protests by charity-run gaushalas (cow shelters) to demand government aid continued for the third day in Gujarat as around a dozen guashalas took their cows to the office of Rajkot district collector Monday, demanding that the government release grant promised in the budget early this year.

Under the aegis of Gaushala Panjrapol Sangh (GPS) Rajkot, functionaries of atleast 10 gaushalas brought cows and their progenies inside the city by loading them on vehicles and then parked the vehicles outside the entry gate of the Rajkot District Collectorate.

However, police prevented the vehicles from entering the collector’s office premises even as gaushala functionaries raised slogans. The protesters demanded that the government release the Rs 30 grant per day per cattle head announced in the budget 2022-23. They dispersed after submitting a memorandum to resident additional collector Ketan Thakkar.

Chandresh Patel, trustee of Kisan Gaushala and a member of the committee of the GPS, said gaushalas and panajrapols which shelter unproductive, diseased and handicapped cattle are in dire straights as donations have dried up due to disruption in businesses caused by Covid-19 pandemic.

“We are hardly able to offer to a cow only half the amount of fodder she requires daily as we don’t have money to purchase fodder. Nor there are gauchars (pastoral land) to graze these cattle. The government promised that it will give Rs 30 per cattle head per day maintenance aid to gaushalas. But seven months after that announcement, we have not received a penny. Therefore, we now have no option but to let the cattle lose,” Patel told The Indian Express.

GPS is an organisation of around 1,700 gaushalas and panjrapoles registered with the state government.

It is demanding that the state government start distributing among gaushalas and panjrapoles the Rs 500 crore aid announced in the budget under Mukhyamantri Gaumata Poshan Yojana or the Chief Minister’s scheme for providing nutrition to cows.

Located downstream Aji Dam, Kisan Gaushala shelters around 1,700 cattle heads, including around 900 which are part of the breeding activity of the institute.

“Only 12 of our cows are in lactation while around 1,200 are unproductive. Proceeds from sale of compost prepared from cow dung and value added products made from cow urine barely cover 15 per cent of the cost of maintaining a cattle head,” he said.

Patel added that the government announcement of aid sent the wrong message to the donors community.

“Donors have started believing that gaushalas and panjarapols are now getting assistance from the state government and therefore they no longer require donations,” the trustee added.

Incidentally, charitable shelters in north Gujarat had let their cattle loose near government offices in the north Gujarat region Friday. A few such shelters had done the same in Kutch Sunday, disrupting traffic on roads.

“While it is true the government has announced aid to gaushalas and panjrapoles, presently we have no instructions to start distributing such assistance,” said a government officer on the condition of anonymity.