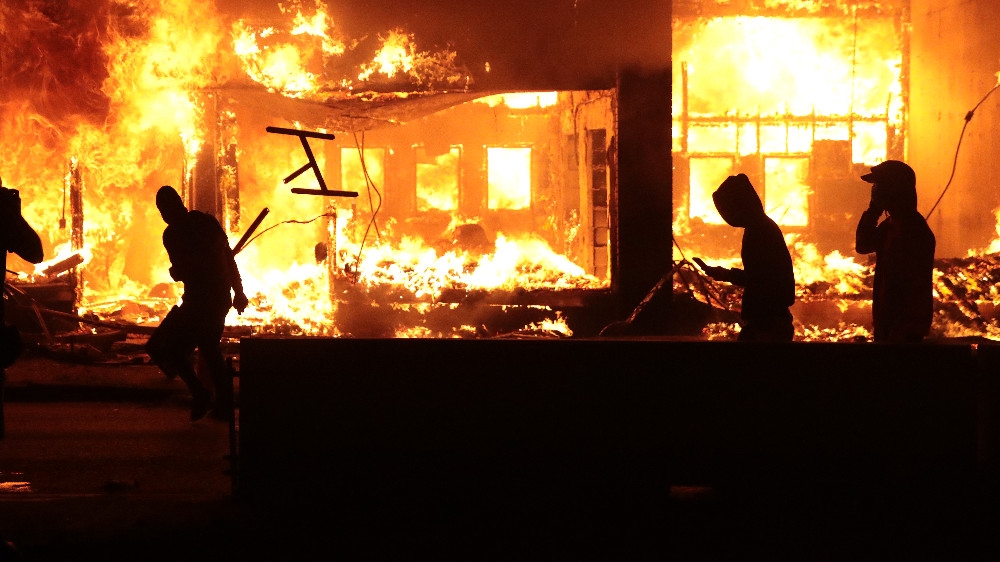 The governor of Minnesota has said he plans to fully mobilise the state’s National Guard and promised a massive show of force to help quell civil unrest following days of protests over the police killing of George Floyd.

Walz said he was moving quickly to mobilise more than 1,000 more guardsmen, for a total of 1,700, and was considering the potential offer of federal military police. But he warned that even that might not be enough, saying he expected another difficult night on Saturday.

“We do not have the numbers,” Walz said. “We cannot arrest people when we are trying to hold ground.”

Walz blamed much of the destruction in Minneapolis on Friday night on well-organised, out-of-state instigators whose goal was to “destabilise civil society”.

“The situation in Minneapolis is no longer in any way about the murder of George Floyd, it is about attacking civil society, instilling fear and disrupting our great cities,” Walz said during a press briefing on Saturday.

The Pentagon on Saturday ordered the army to put military police units on alert to head to the city on short notice at President Donald Trump’s request, according to the Associated Press news agency, citing three people with direct knowledge of the orders who did not want their names used because they were not authorised to discuss the preparations.

Protests erupted in cities across the US, including in New York City, Atlanta, Washington DC and DenverÂ  [Michael Ciaglo/Getty Images/AFP]

The death on Monday in Minneapolis of George Floyd has sparked demonstrations, some peaceful and some of them violent, in many cities across the nation, including one in Washington DC, on Friday.

From Minneapolis to New York City, Atlanta and Washington, angry protesters took to the streets over the treatment of minorities by law enforcement.

The demonstrations broke out for a fourth night despite prosecutors announcing on Friday that the policeman involved in Floyd’s death, Derek Chauvin, had been arrested on third-degree murder and manslaughter charges.

Graphic video footage taken on an onlooker’s cellphone and widely circulated on the internet shows 46-year-old Floyd – with Chauvin’s knee pressed into his neck – gasping for air and repeatedly groaning, “Please, I can’t breathe,” while a crowd of bystanders shouted at police to let him up.

Three other officers have been fired and are being investigated in connection with Monday’s incident, which reignited rage that civil rights activists said has long simmered in Minneapolis and cities across the country over persistent racial bias in the US criminal justice system.

In Detroit late on Friday, a 19-year-old man was shot dead at a demonstration by a suspect who fired from a sports utility vehicle then fled, local media reported. Police made no immediate comment.

Many of the protesters chanted, “No justice, no peace,” and some carried signs that read, “End police brutality” and “I won’t stop yelling until everyone can breathe”.

Thousands of demonstrators also filled the streets of New York City’s Brooklyn borough near the Barclays Center arena. Police armed with batons and pepper spray made scores of arrests.

In lower Manhattan, demonstrators at a “We can’t breathe” rally demanded legislation to outlaw the chokehold used by a city police officer in the 2014 death of Eric Garner, who was also Black.

In Washington DC, police and secret service agents deployed in force around the White House before dozens of demonstrators gathered across the street in Lafayette Square.

President Donald Trump said early on Saturday that he had watched the protest from his window, and, if the demonstrators had breached the fence, “they would have been greeted with the most vicious dogs and most ominous weapons, I have ever seen.”

“That’s when people would have been really badly hurt, at least,” Trump wrote on Twitter. “Many Secret Service agents just waiting for action.”

Trump accused Washington DC Mayor Muriel Bowser of refusing to send police to help the US Secret Service, although the Washington Post reported that city officers did help control the later gathering.

The mayor’s office and the DC police did not immediately respond to requests for comment.

On Friday, Trump drew a warning from Twitter and condemnation from Democrats after posting a comment that “looting leads to shooting,” suggesting protesters who turned to looting could be fired upon.