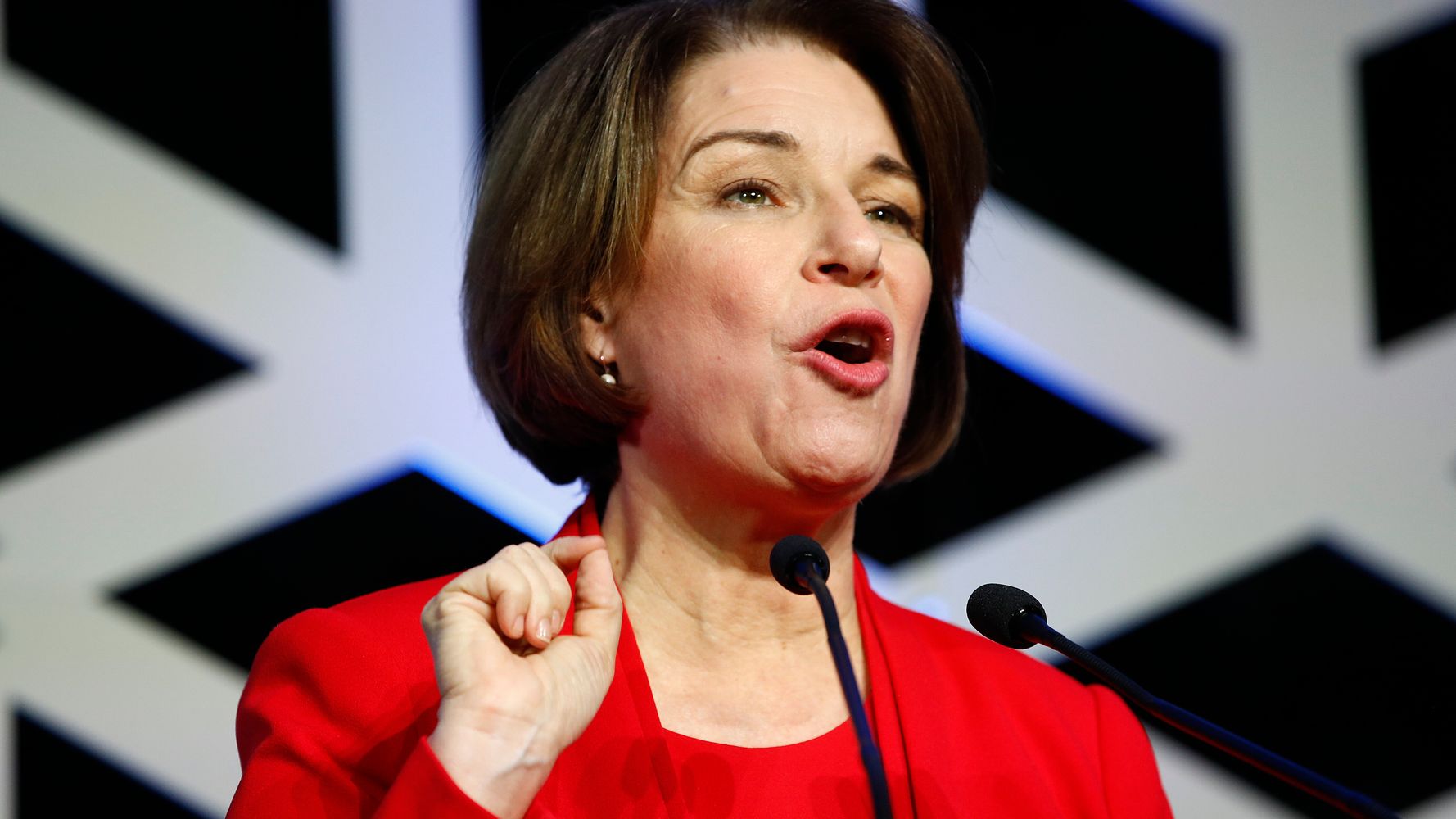 The death of George Floyd, a black man who died after a Minneapolis police officer kneeled on his neck earlier this week, has resurrected Democratic Sen. Amy Klobucharâ€™s record as a prosecutor in the state â€• including her tense relationship with the Black community there â€• at the politically sensitive time that sheâ€™s being considered by Joe Biden to be his running mate.Â

â€œThere is absolutely no way that she is qualified to become Bidenâ€™s VP nominee,â€ said Nekima Levy Armstrong, a civil rights lawyer who served as head of the Minneapolis NAACP from 2015 to 2016.

â€œWith everything thatâ€™s happened in Minneapolis and across the country,â€ she said, Klobuchar would put Biden at even more of a â€œdisadvantageâ€ politically.

â€œThis does not work in Amyâ€™s favor because she had such a strained relationship with that community for years,â€ added a prominent Democrat.Â

Four Minnesota police officers were fired this week after video emerged showing one of the men, a white officer, kneeling on Floydâ€™s neck as he pleaded for help, saying â€I canâ€™t breathe.â€ They detained him Monday evening on suspicion of trying using a fake $20 bill at a convenience store. Floyd was declared dead shortly after arriving at the hospital.Â

Two days of protests in Minneapolis have followed, with police using rubber bullets and tear gas to disperse crowds.Â

Klobuchar received her start in politics right there, in Hennepin County, where she served as the top prosecutor for eight years, beginning in 1999. She employed a tough-on-crime approach, pushing, among other things, more convictions of minor offenses like graffiti and school truancy.

Klobucharâ€™s methods were not exceptional for the time period, when cities were struggling to reduce the high crime rates of the 1980s and â€™90s.Â

But reformers now blame the techniques that she and others adopted for swelling the countryâ€™s disproportionately non-white jail and prison populations.

â€œMinnesota leadership has really supported police and the expansion of policing,â€ said Isabela Escalona, a spokesperson for the Centro de Trabajadores Unidos en Lucha, a worker center that has fought against increases in Minneapolisâ€™ police budget. â€œSheâ€™s a part of the problem and we must find community solutions to safety beyond police.â€

During her presidential campaign, Klobuchar faced deep skepticism from many Black voters, in part because of her record in Hennepin County. â€œAs a prosecutor in heavily white Minnesota, Amy Klobuchar declined to go after police involved in fatal encounters with black men,â€ read the headline of a Washington Post article in March 2019 that examined her record on criminal justice.Â

According to The Washington Post, Klobuchar chose not to bring charges against officers in more than two dozen cases where people were killed in police encounters.Â

Throughout her presidential campaign, and as recently as this week, Klobuchar has said she believes prosecutors â€” and not grand juries â€” should ultimately decide whether or not to charge police officers. In many of the cases cited in the Post, grand juries ultimately decided not to hand up charges.

â€œI think it just makes for much more responsibility if you basically make the decision yourself,â€ she told CNNâ€™s Chris Cuomo in an interview earlier this week. â€œBack then it was thought, let the community help decide how these cases should be handled.â€

As a presidential candidate, and before that as a Senate candidate, Klobuchar cited the prosecution of the alleged perpetrators of a 2002 shooting that killed 11-year-old Tyesha Edwards as evidence that her prosecutorial style came in response to genuine concern from the stateâ€™s Black community about gun violence plaguing urban neighborhoods.

But an investigation byÂ The Associated Press in February found that there were many outstanding questions about the evidence that Klobucharâ€™s office used to convict Myon Burrell, who was 16 at the time of the shooting and is serving a life sentence. His co-defendants now deny that he participated in the shooting.Â

Protesters angered by the case stormed the stage ahead of a planned rally in a Minneapolis suburb two nights before Super Tuesday in early March. The demonstration prompted Klobuchar to cancel the rally; she dropped out of the presidential race the next day.Â

The Burrell case looms large for activists wary of Biden picking her as a running mate.Â

Biden â€œuses all the language of [Black Lives Matter] and liberal racial justice advocates but you look at what a person does,â€ said a Minneapolis progressive strategist, who asked for anonymity to speak freely. â€œPicking Klobuchar, given the record she has, especially in this moment, seems like nothing less than an admission that he doesnâ€™t seriously care about these issues.â€

â€œThe Black community in Minnesota has consistently expressed concern about Amy Klobucharâ€™s prosecutorial record and her involvement in prosecuting Myon Burrell, an innocent Black teenager whose case was used by her for political gain, including during her campaign for President,â€ Levy Armstrong said. â€œAnother deeply troubling aspect of Klobucharâ€™s record was her failure to hold a single officer accountable for police shootings, dozens of which happened on her watch.â€

Klobuchar has called for an independent investigation into Burrellâ€™s case, a move that drew praise from an attorney for the Burrell family and Leslie Redmond, the head of the Minneapolis NAACP who has protested Klobuchar in the past.

Klobucharâ€™s office declined to comment on the record for this story.Â Â

Minnesota Attorney General Keith Ellison, who is Black and a former criminal defense attorney, defended Klobucharâ€™s prosecutorial record, maintaining that she was â€œnot unusually toughâ€ and has since become a â€œvoice for criminal justice reform in the context of race.â€Â

Derek Chauvin, the police officer seen kneeling on Floyd, had previously been involved in two other violent incidents with civilians. One happened in late October 2006, when he and five other officers shot and killed a man who they said aimed a shotgun at them. Only days later, Klobuchar was elected to the Senate and remained Hennepin County district attorney for two more months. In 2007, a grand jury declined to bring charges against Chauvin and the other officers.

Klobuchar put out a statement on Floydâ€™s death, describing it as a â€horrifying and gut wrenching instance of an African-American man dying.â€ She also called for a â€œcomplete and thorough outside investigation into what occurred, and those involved must be held accountable.â€Â

Her office did not return a request for comment for this piece.Â

Bidenâ€™s campaign looked like it was over, until South Carolina voters â€• primarily, Black voters in the state â€• delivered him a knock-out victory. In recognition of that support, many Democrats have urged him to choose a woman of color â€• or, at the very least, not to pick someone who has had such a strained relationship with the Black community.Â

In a recent Washington Post op-ed, a group of six Black female activists specifically named Klobuchar as an unacceptable vice presidential option if he wants to win over Black voters: â€œBiden, the presumptive Democratic nominee, does not need help winning white, working-class voters â€” he serves that function himself. A choice such as [Klobuchar], who failed to prosecute controversial police killings and is responsible for the imprisonment of Myon Burrell, will only alienate black voters.â€

Last week, Biden made supporters cringe when he told Charlamagne tha God, a popular Black radio host, â€œIf you have a problem figuring out whether youâ€™re for me or Trump, then you ainâ€™t Black.â€ He apologized later that day in a call with Black business leaders, saying he was â€œtoo cavalierâ€ and did not take the Black vote for granted.Â

The prominent Democrat who spoke with HuffPost said the comments underscored why Biden needed to choose a woman of color â€• or someone who can help him talk to voters of color.

â€œThere are a couple of things that I think are going to hurt her,â€ they said of Klobuchar. â€œOne was Bidenâ€™s real big gaffe, which now I think forces his hand in more ways than one to pick a woman of color. But two, now this [Floyd killing] is going to raise all the issues, particularly with the Minneapolis NAACP and the African-American community. Itâ€™s going to dredge all that back up again.â€

Ellison, who supported Vermont Sen. Bernie Sandersâ€™ presidential run, said he does not think Biden should be limited to choosing a woman of color as his running mate.Â

Klobuchar would â€œmake a great vice president. Sheâ€™d be a tireless campaigner too,â€ he said. â€œSheâ€™ll help us win the upper Midwest.â€

Biden released a statement on Floyd on Wednesday, saying it was â€œnot an isolated incident, but a part of an ingrained systemic cycle of justice that still exists in this country.â€Â

The former vice president is set to deliver a keynote at the Minnesota Democratic-Farmer-Labor Partyâ€™s state convention on Sunday, introduced by Klobuchar. His team has not yet released his remarks, but some allies have urged him to address Floydâ€™s death.

Biden has enjoyed high support among older Black voters, but has struggled with young voters of all races, who typically have more progressive views on a host of issues. Hillary Clintonâ€™s failure to generateÂ higher turnout among Black voters in general, and young Black voters in particular, is widely considered a key reason for her loss to Donald Trump in the 2016 presidential race.

Those younger voters are looking for a vice presidential pick who demonstrates that Biden is committed to a world with fewer deaths like George Floydâ€™s, according to Hadj-Moussa.

â€œThereâ€™s an incredible amount of pain and we have an opportunity to not go back to the way things were, but to create a better future,â€ she said. â€œIf I was advising Vice President Biden, I would not point to Sen. Klobuchar as a vice presidential pick who could stand next to him and be part of building a new future.â€Â