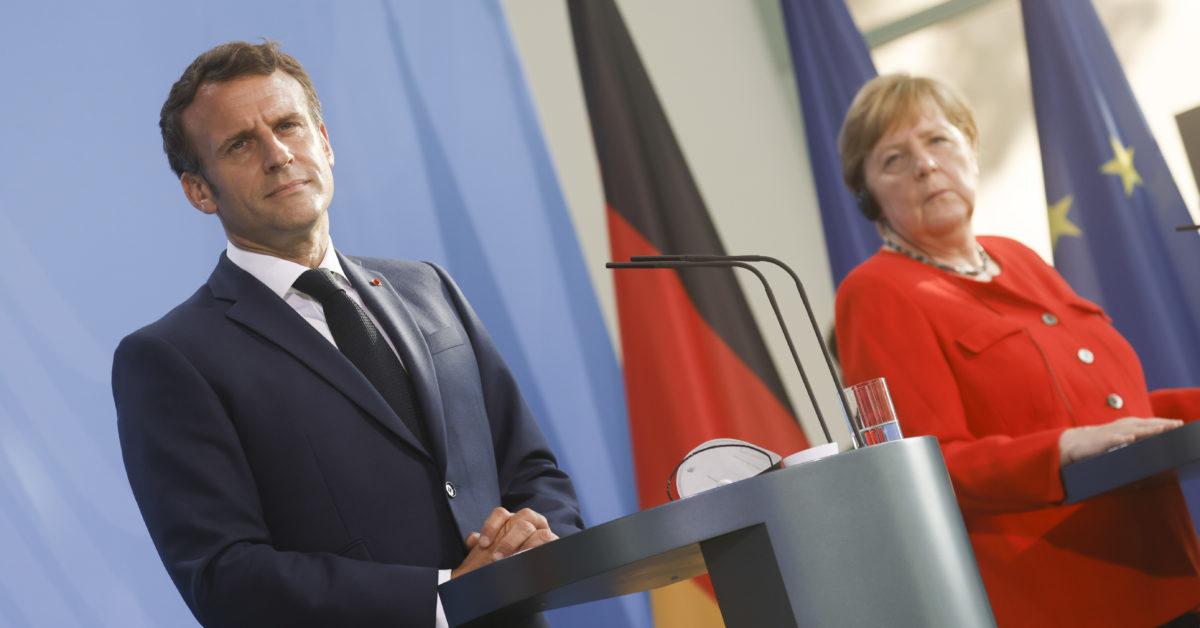 Germany and France threw the EUâ€™s carefully orchestrated Russia policy into disarray on Wednesday by raising the threat of new economic sanctions while also floating the possibility of a summit meeting between European leaders and Russian President Vladimir Putin.

The proposals, put forward by German Chancellor Angela Merkel after consultation with French President Emmanuel Macron, came on the eve of a European Council summit at which heads of state and government were scheduled to discuss EU-Russia relations over dinner â€”Â a time reserved for their most sensitive conversations.

The initiatives seemed intended to create a new carrot-and-stick approach toward Russia by the EU, which has worked hard to stay unified in pressuring Moscow since the 2014 invasion and annexation of Crimea. Officials failed to explainÂ why making such a move at this particular time might yield different results than previous attempts to engage with Putin.

But there were quick signs the plan could backfire, potentially dividing the EU by being too soft on Putin by offering a summit, while simultaneously angering Moscow by raising the threat of new sanctions. Such threats could risk undermining an effort by U.S. President Joe Biden to shift the dynamic between the West and the Kremlin, just a week after he met Putin at a high-stakes summit in Geneva.

The German-French plan, unveiled during a meeting of EU diplomats, blindsided leaders of the European institutions, including Council President Charles Michel, who controls the summit agenda.

Many EU diplomats expressed fury at the last-minute proposal, with some of the strongest outrage coming from the three Baltic countries and Poland. Those countries have long advocated a tough response to Russiaâ€™s military aggression in Ukraine, to malign activities by Russian operatives on European soil, including assassinations, and to the poisoning and subsequent jailing of Russian opposition figure Alexei Navalny.

The Navalny case, in particular, helped solidify EU unity against Russia, with Merkel personally announcing the results of a German investigation showing Navalny was poisoned with a military-grade chemical weapon.

The idea of a potential summit between Putin and EU leaders struck many diplomats and officials as ill-conceived and ill-timed, essentially rewarding the Russian leader without even waiting to see if he would respond positively to Bidenâ€™s overtures.

The EU also has its own reasons to keep Moscow at armâ€™s length. Russian Foreign Minister Sergey Lavrov humiliated the EUâ€™s foreign policy chief, Josep Borrell, during a trip to Moscow earlier this year, and has lashed out repeatedly to accuse the EU of imposing illegal sanctions and blame Brussels for the badly soured relations of recent years.

Some officials suggested European leaders were eager to insert themselves into the conversation between Biden and Putin, and that they had been irked to see the U.S. president discussing issues of more immediate strategic relevance to Europe â€”Â even though such views are utterly disconnected from geopolitical reality, given the obvious history of Moscow and Washington as former Cold War, superpower rivals.

One senior EU diplomat said some of the German-French ideas were non-starters for some countries in Central and Eastern Europe.

As for the idea of a summit, Â or any improved ties with Putin, the diplomat added: â€œWeâ€™re not seeing any reason why we should upgrade our relations with Russia, especially when weâ€™re currently dealing with a cyberattack, disinformation.â€

An advisor to Macron defended the German-Franco initiative, including the idea of a summit.

â€œThe president launched a demanding dialogue with Russia while ensuring coordinationÂ with the Europeans; we agree with the Germans on this approach,â€ the adviser said, adding that one goal of this weekâ€™s European Council summit is to settle on a strategy toward Russia endorsed by all 27 countries.

The adviser also defended the idea of a summit, essentially saying that if the Americans could meet Putin, the Europeans could too.

â€œFrom there it is logical to think about the added value of a high-level dialogue,â€ the Macron adviser said. â€œIt is the observation the U.S. made by holding the Geneva summit. It is also an observation, shared with the Germans, that the president made for a demanding dialogue that is coordinated with our European partners.â€

But it was unclear how Macron and Merkel would be able to achieve a coordinated policy by infuriating the EU countries located closest to the Russian border, whose citizens spent decades living under Soviet repression.

The prospect of new economic sanctions seemed an obvious ploy to win over support from Russiaâ€™s toughest critics, who have been eager for measures against the Nord Stream 2 gas pipeline.

According to the German-French proposal, the heads of state and government would issue summit conclusions essentially demanding that Russia behave itself on the world stage, including fast implementation of the Minsk peace agreement aimed at ending the conflict in Ukraine.

â€œRegarding the strengthening of our resilience, the European Council stresses the need for a firm and coordinated response by the EU and the Member States to Russiaâ€™s malign activities, making full use of all instruments at the EUâ€™s disposal, and ensuring coordination with other partners,â€ the draft conclusions proposed by Germany and France stated. â€œTo this aim, the European Council also tasks the Commission and the High Representative to present options for additional adequate and effective economic sanctions against responsible parties in reaction to destabilising actions by Russia.â€

While the threat of new sanctions might be sufficient to infuriate Putin, the German-French proposal also provocatively emphasized the EUâ€™s efforts to exert greater sway in the so-called Eastern Partnership countries, including Ukraine, Georgia and Moldova, as well as in Central Asia â€” regions that Russia has long viewed as within its own sphere of influence.

The conclusions also specifically cite the Western Balkans, where Moscow has sought to compete for influence.

â€œThe European Council stresses the need to [strengthen] relations with the Western Balkans and consolidate their European perspective,â€ according to the German-French proposal. â€œIt also stresses the need for strengthening and intensifying economic and political relations and cooperation with those Eastern Partners and other neighbors in particular in Central Asia, who are willing to seek closer cooperation with the European Union.â€

Supporters of the French-German proposal complained that it was â€œstrangeâ€ Biden could meet Putin, but EU leaders donâ€™t, despite the fact there is much more to talk about given the geographic proximity and stronger economic ties.

Several senior EU officials said Biden had succeeded in laying the ground for reversing years of deteriorating relations with Russia, and they praised the U.S. for sending a senior State Department official, Victoria Nuland, to Brussels directly from the Geneva summit to brief her EU counterparts.

That collaboration seemed all the more striking given the German-French proposal was unveiled as U.S. Secretary of State Antony Blinken arrived in Berlin to attend a conference about the international response to the ongoing civil war in Libya.

Merkel, who met Blinken on Wednesday, praised Bidenâ€™s efforts in Geneva and cited a renewed common outlook between Berlin and Washington. But she made no mention of the proposals for a new EU strategy, or how it might impact the U.S. initiatives.

â€œIn this respect, we will continue this exchange, naturally also with a view to the talks that took place between President Biden and the Russian president,â€ Merkel continued. â€œI expressly welcome the fact that such talks have taken place, just as there were talks with the Chinese leadership in Alaska. I think that with all the controversies in the world, we must always keep channels of communication open, clearly state our positions and interests, and then see where corridors for solutions can be found.â€