Germanyâ€™s Greens are coming for the car (and the chancellery) 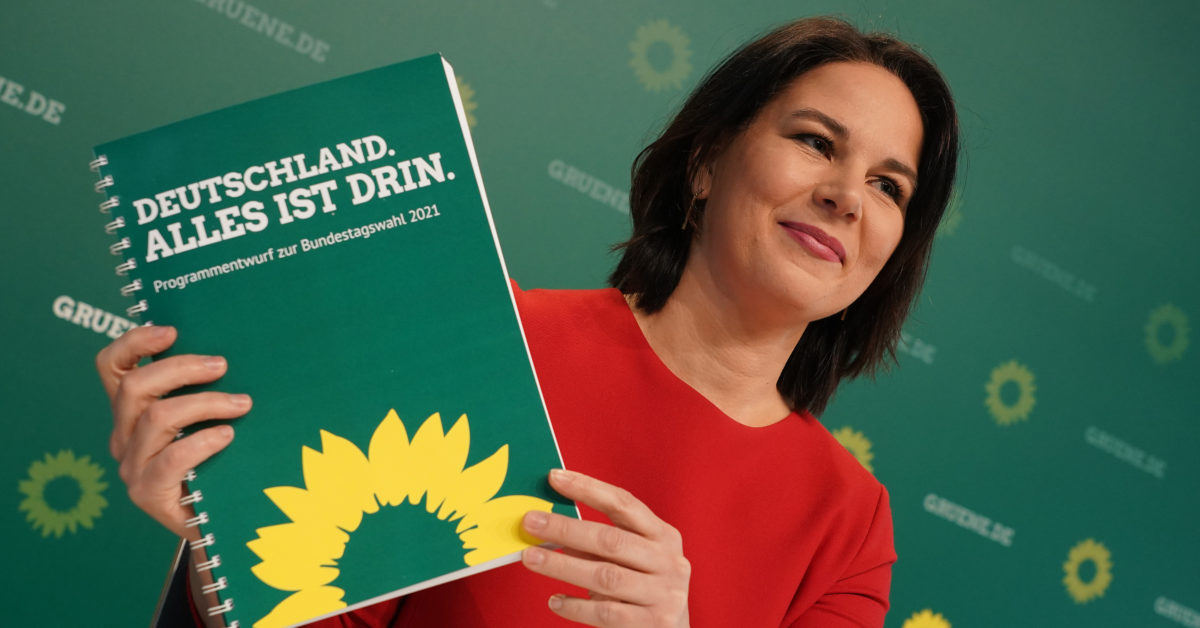 BERLIN â€”Â Germany’s Greens are aiming at the country’s top political job, and to get there they want to take down fossil fuel cars.

It’s part of a wide-ranging series of ecological promises, from speeding up the country’s coal phaseout to slashing greenhouse gas emissions, announced in the party’s draft manifesto on Friday â€” all an effort to bolster support among the country’s increasingly climate-concerned voters ahead of September’s federal election.

The Greens “will set clear rules on how to tackle the climate crisis … only allowing zero-emission cars from 2030 onward,” Annalena Baerbock, one of the party’s two co-leaders, told reporters on Friday. The draft program, which is now open to feedback from party delegates, is expected to be adopted at a party conference in June.

That sets the Greens on a collision course with Chancellor Angela Merkel’s Christian Democrats (CDU), who have long been against a rigid date to get rid of fossil fuel-powered cars, a symbol of German engineering, industriousness and wealth to many conservatives.

The Greens sense that they’ve got the wind at their backs following strong performances in two regional elections last week that were a disaster for the CDU. The Greens held on to first place in Baden-WÃ¼rttemberg â€” a heartland of the car industry â€” and nearly doubled their result in Rhineland-Palatinate to finish third.

The ruling coalition that emerges after the federal election is still unclear â€” but the Greens will play a key role in most configurations.

In a bid to end what the Greens called the “reactive politics” of Merkel’s “tired” government, Baerbock announced that Germany needs a “triad of regulatory law” consisting of phasing out coal and combustion engine cars by 2030 as well as “massively expanding renewable energies.”

The Christian Democrats are feeling the pressure and are scrambling to present a climate-friendly face.

Undermining the appeal of the Greens won’t work “if the CDU emphasizes the economy as separate from climate and the environment,” Norbert RÃ¶ttgen, a CDU MP from the party’s progressive wing who tried and failed to become Merkel’s successor, said earlier this week.

Instead, he said, the CDU would “become stronger at the expense of the Greens when our policies emphasize that intelligent climate and economic policy aren’t contradictory, but are mutually reinforcing.”

That creates a difficult balancing act for the Christian Democrats, who have to cater to their traditional conservative electorate while reaching out to greener voters.

Transport Minister Andreas Scheuer, from the CDU’s Bavarian sister party, the Christian Social Union (CSU), recently proposed a soft 2035 target date for phasing out gasoline and diesel cars â€” but that comes with the caveat that there would still be a future for the internal combustion engine as long as it uses alternative fuels.

“The engine is not the problem, it is the fuel from fossil sources,” said Hildegard MÃ¼ller, a former state secretary during Merkel’s earlier years and now the national auto industry’s chief lobbyist. “That is why, in addition to the ramp-up of electromobility, we now need speed in the production of synthetic fuels from sustainable, CO2-neutral sources.”

MÃ¼ller says there will still be 30 million cars on Germany’s roads with an internal combustion engine by 2030, putting the onus on finding cleaner fuels to replace petrol and diesel instead of banning the engine, as the Greens plan to do.

The Greens are aware of the CDU’s dilemma, and are targeting issues like setting a 130-kilometer-per-hour speed limit on the autobahns â€” anathema to car-loving conservatives but an idea that has appeal among a narrow majority of Germans, particularly younger and greener voters. The Greens also want to replace short-haul flights with better rail connections.

“We are finally putting Germany on the 1.5-degree path with our program,” Baerbock said, referring to the manifesto’s commitment to align all policies with the Paris Agreement’s more ambitious climate goal of limiting global warming to 1.5 degrees Celsius. That includes raising the country’s domestic emissions reduction goal by 2030 to 70 percent, up from the current 55 percent cut.

That would put Germany ahead of the EU’s Green Deal objectives, but would require massive changes across the economy.

All that dovetails with the demands from environmental activists and youth strikers, who took to the streets again on Friday to demand faster action on climate change.

The Greens also declared war on Nord Stream 2, the controversial Russia-backed pipeline project that has soured Berlin’s relations with the U.S. and EU countries like Poland.

“The project finances a corrupt regime and is a bet against European climate goals â€” it should never have been realized,” the Greens wrote on their website where a petition is running to stop construction of the pipeline.

That position differentiates the Greens from the careful calibrations of the CDU â€” Merkel insists that the Baltic Sea pipeline is a business, and not a political, project. It also contrasts with the center-left Social Democrats, the junior members of the ruling coalition, who have historically supported the project.