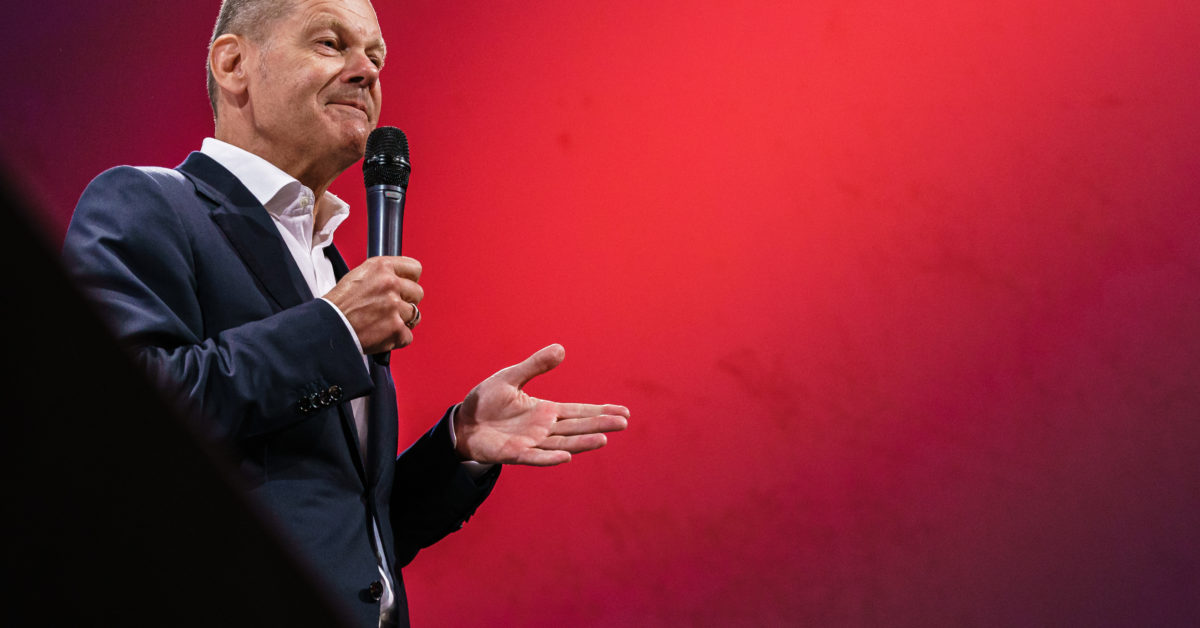 KARLSRUHE, Germany — Olaf Scholz feels his moment to succeed Angela Merkel has arrived, and German voters increasingly believe the same — even though the Social Democrat has left them in the dark about how hard Berlin would turn to the left under his leadership.

“The polls are very good. And I want to honestly say that I’m very touched that many entrust me with this office” of the German chancellor, Scholz told a loudly applauding and cheering crowd on the market square in Karlsruhe, southern Germany, on Monday.

His optimism is boosted by a poll published Sunday, which puts his center-left Social Democratic Party (SPD) at 22 percent, neck and neck with Merkel’s conservative alliance of Christian Democrats (CDU) and the Christian Social Union (CSU). It was a worrying moment for the conservatives, who have been dropping in the polls as the SPD gains ground.

“CDU and CSU should take a rest in the opposition. They governed this country long enough,” Scholz told the audience in a speech that focused heavily on core Social Democratic interests such as inequality. He also addressed the climate crisis — and accused the conservative parties of having done too little, too slowly.

The SPD’s sudden rise in popularity comes after months of having trailed at just 15 to 17 percentage points in the polls, way behind the CDU/CSU of center-right lead candidate Armin Laschet and the Greens with their candidate Annalena Baerbock, initially slated as the only two real contenders to succeed Merkel, who’s not running for reelection after 16 years in office. But in Sunday’s poll, The Greens came in third at 17 percent, and Laschet has suffered from a series of campaign-trail foibles.

Scholz has long insisted that when the campaign enters crunch time ahead of the September 26 election, voters will realize that he, the current vice-chancellor and finance minister, is the most experienced and best-suited candidate to lead Germany. The SPD has concentrated basically its entire election campaign on him and runs with the slogan “Scholz packt das an,” meaning “Scholz will tackle it.”

Fortunately for Scholz, Baerbock and Laschet have done their best to support his argument, stumbling through a series of blunders. Most severely, Laschet was caught on camera laughing while the country’s president tried to console victims of the disastrous July floods. More broadly, Laschet’s campaign has been described as being more reminiscent of a parody than a serious application for the chancellorship.

Moreover, the Afghanistan crisis has made foreign policy an unusually prominent topic in the campaign — and only 16 percent of Germans think Laschet or Baerbock have competence in that area, in comparison to at least 39 percent for Scholz, according to a Spiegel poll from last week.

“I don’t talk about the mistakes of my political contenders,” Scholz said Monday, even as he stressed that “experience” was important in dealing with Germany’s upcoming challenges.

He also stressed his pro-European convictions and vowed that if elected chancellor he would make a “clear statement” toward countries like Poland and Hungary when they infringe on the rule of law or discriminate against minority groups like the LGTBQ+ community.

Shifting to the left — but how far?

In his bid to convince voters that they should entrust him with taking over the chancellory from Merkel, Scholz even copied her famous hand sign, the Merkel rhombus, during a magazine cover photoshoot last week.

Yet his opponents say Scholz is deceiving voters, arguing he would not continue the Merkel course but shift to the left, and potentially even to the hard left.

In an attempt to halt his polling slide, Laschet has resorted to a project-fear strategy, warning conservative voters that Scholz may well form a left-leaning coalition involving the far left. That would be “poison for our economy” and “dangerous for our inner security,” he told BILD Live on Sunday evening.

Remarkably, Scholz refused on Sunday to rule out such an option.

“I think it’s about the voters giving a mandate,” he told BILD Live. “Then we can see what will happen.”

On Monday in Karlsruhe, Scholz again skirted offering a clear stance on his coalition options. Instead, he simply expressed hope the SPD will gain more support — an outcome that would allow him to avoid dramatic concessions in coalition talks.

Monday night’s rally helped Scholz win at least one new supporter. Corinna Faisst-Scholz, a psychotherapist from Karlsruhe, said Scholz’s public performance had convinced her to vote for SPD instead of the Greens.

“He was even better than on TV,” she said. “He seems to me the most experienced candidate.” 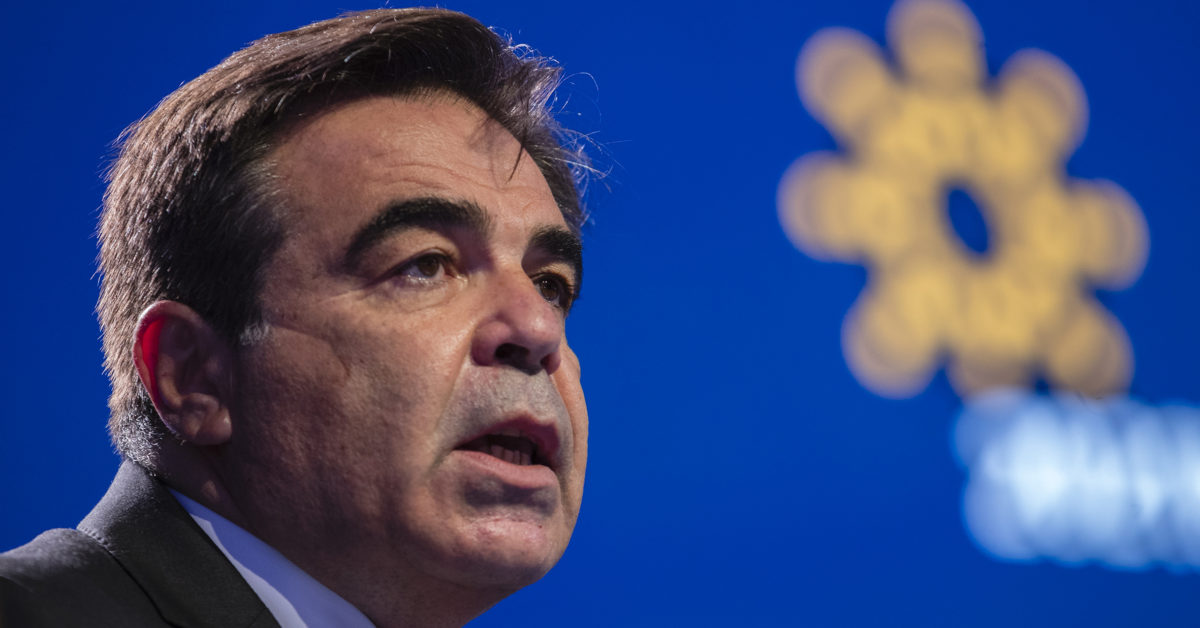 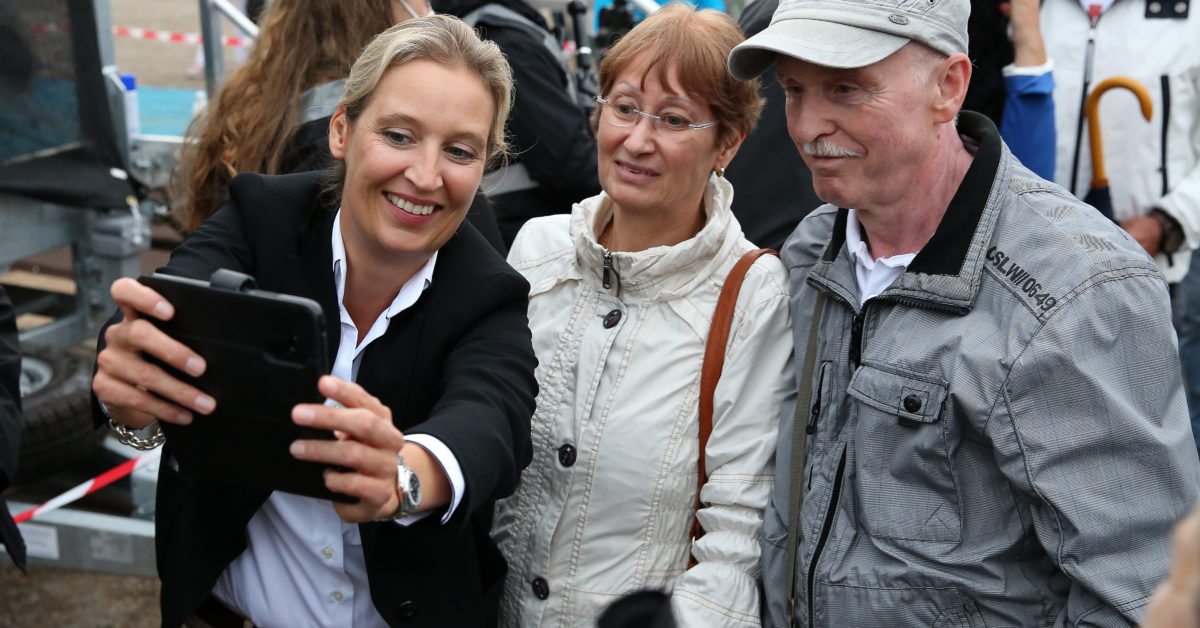