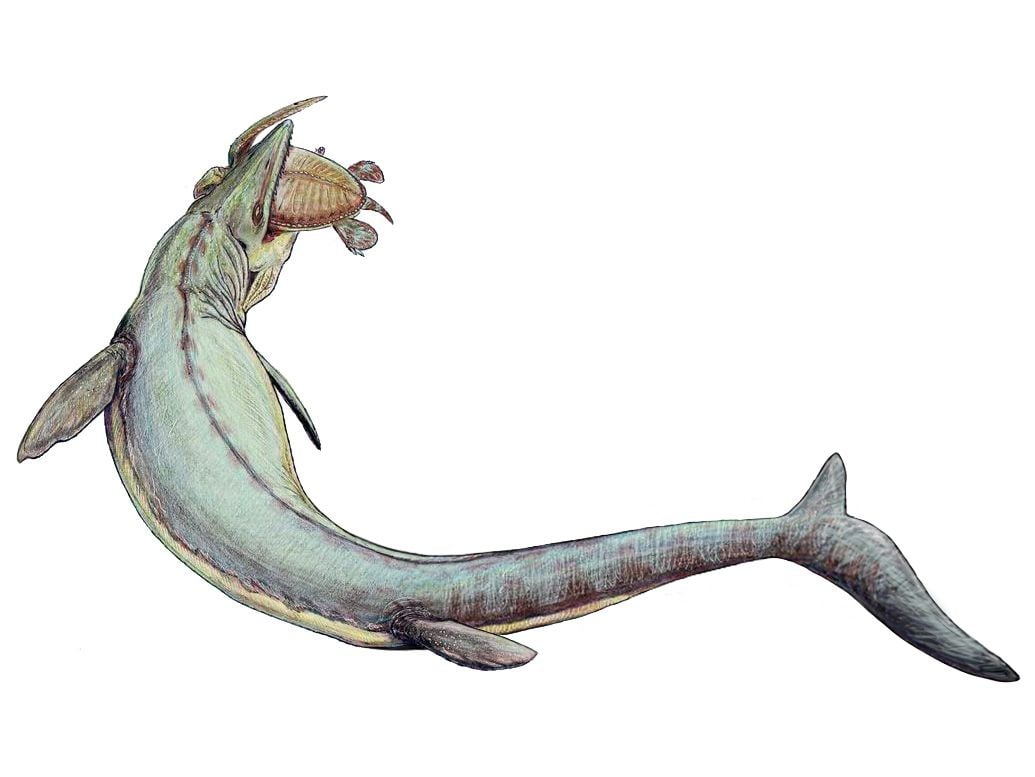 There hardly was a more fearsome family of seagoing carnivores than the mosasaurs. From the time the first of these marine lizards slipped into the oceans about 98 million years ago, mosasaurs diversified into a widespread array of aquatic ambush predators that fed on everything from dinosaurs washed out to sea to other mosasaurs. And while it was once thought that these reptiles started to disappear from Earthâ€™s oceans millions of years before a catastrophic asteroid strike closed the Cretaceous period, a fossil find in North Dakota is helping to rewrite the history of these voracious lizards.

The Hell Creek Formation of the western United States is most famous for fossils of Tyrannosaurus, Triceratops, Pachycephalosaurus and other dinosaurs that roamed the forests and swamps of the region 66 million years ago. But parts of the Hell Creek Formation also preserve pools of what was once ocean, the remainders of a vast Western Interior Seaway that split North America in two. In one of these pockets of marine strata a private landowner found a curious fossilâ€”an isolated piece of a creatureâ€™s backboneâ€”and took it to the North Dakota Geological Survey for identification. The bone had come from a large mosasaur, and further examination of the site turned up part of a mosasaurâ€™s jaw. The giant lizards hadnâ€™t vanished long before the impact. The bones added to an emerging picture that the oceanâ€™s apex predators were still prowling the Cretaceous seas until the day the asteroid struck, the conclusion of a paper published in AugustÂ in the journal PaleoBios.

Up until now, notes study author and WVU Potomac State College paleontologist Nathan Van Vranken, most mosasaur finds from North America have come from sites along the ancient Atlantic Coast and Gulf of Mexico. As sea levels fell and the Western Interior Seaway drained off the continent, it seemed the mosasaurs that once dominated those waters disappeared as the once thriving ecosystems turned into a â€œStrangelove Oceanâ€ where the water became more acidic and plankton died off en masse. Such a harsh environment was thought to lack enough prey for mosasaurs and other large predators to survive. But the new find from North Dakota indicates that large mosasaurs were still present in the last remaining parts of the ancient seaway in the middle of the continent. â€œThey still persisted until the end,â€ Van Vranken says.

Part of the difficulty in investigating the history of mosasaurs is that not all of these animals lived in places that readily became preserved. â€œThe catch with trying to understand extinct animal diversity is that weâ€™re at the mercy of the fossil record, which is far from perfect,â€ says Richard Gilder Graduate School paleontologist Amelia Zietlow, who was not involved in the new study. Some mosasaur species had adaptations for cruising deep, open waters far from coasts, she notes, and these species are much harder to find than those that lived near coastlines where sediment could rapidly bury a mosasaurâ€™s body. Still, multiple finds in recent years have indicated that mosasaurs were going strong right up until the moment the Cretaceous closed. The new study adds to that picture by indicating mosasaurs were still present in the last remnants of the Western Interior Seaway.

The mosasaur uncovered in North Dakota was a large one, identified as either Prognathodon or Mosasaurus in the new paper. Either way, this was a big animal and an apex predator in its habitat. Prognathodon has been estimated to reach lengths in excess of 33 feet, and the biggest Mosasaurus species got to be even largerâ€”around 59 feet, or nearly 20 feet longer than the biggest T. rex. While smaller mosasaurs likely fed on fish and invertebrates, Van Vranken says, the larger ones nabbed larger prey such as sharks and other marine reptiles. â€œThey were totally, absolutely, unquestionably apex marine predators, and the only thing a fully-grown mosasaur needed to fear was other, larger mosasaurs,â€ Zietlow says. The particular animal uncovered in North Dakota, Van Vranken notes, probably caught whatever it could as its last remaining pool of ocean was disappearing. Then mosasaurs became extinct worldwide when the ecological shocks of a massive asteroid impact quickly and dramatically shook up Earthâ€™s environments.

The fate of the last mosasaurs was a cap on more than 30 million years of evolutionary history. â€œEarly mosasaurs were descended from a monitor lizard-like ancestor that adapted to a marine lifestyle,â€ Van Vranken says, possibly during a time when sea levels were rising worldwide and new food sources were available for reptiles that didnâ€™t mind getting their feet wet. Fossils such as Dallasaurus and Russellosaurusâ€”both found in the Cretaceous rocks of Texasâ€”offer hints that these first mosasaurs looked like creatures caught in between a Komodo dragon and Mosasaurus.

Through the millions of years of Cretaceous history that followed, the feet of mosasaurs became adapted into paddles, their scales became keeled and streamlined and some species evolved downward-kinked tails that supported a shark-like tail fin. And while a few mosasaurs evolved bulbous, rounded teeth for crushing shellsâ€”such as the aptly-named Globidensâ€”most were sharp-toothed predators that fed on just about anything they could nab. And one of the most distinctive features of mosasaurs was a second row of pointed teeth on their palateâ€”an extra, spiky trap that helped prevent struggling prey from escaping. Paleontologists have found indentations of the reptilesâ€™ impressive teeth on the shells of squid relatives called ammonites, demonstrating how the lizards grabbed and crushed their shelly meals.

Just as with dinosaurs, the image of mosasaurs paleontologists are putting together differs from the Hollywood version that quickly gained stardom in Jurassic World. The kaiju-sized Hollywood version has munched sharks, pterosaurs, dinosaurs and humans during its on-screen rampages, perhaps staying true to the voracious mosasaur reputation. But aside from being quite a bit smaller, Zietlow says, large mosasaursâ€”like Mosasaurus and Tylosaurusâ€”had snake-like scales and would have had lips covering their teeth instead of a maw of snaggletoothed chompers. Nevertheless, the living animals must have been just as impressive as their box office counterparts. â€œMosasaurs are literally real-life seas monsters,â€ Zietlow says. â€œThey have a double row of teeth, whale-like flippers, a shark-like tail, beautiful streamlined skulls and are the biggest lizards to ever live. Whatâ€™s not to love?â€