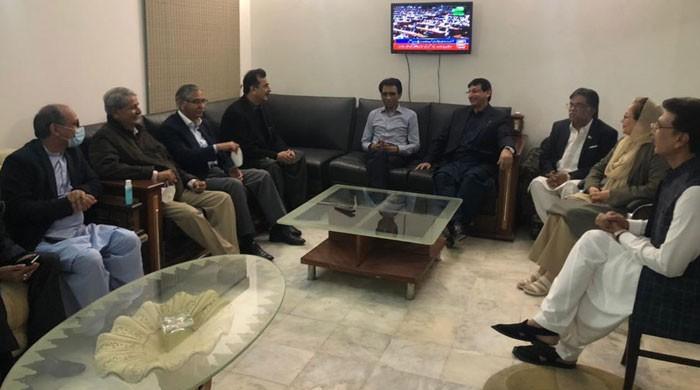 Gilani will likely be standing for the election â€” due on March 12 â€” on behalf of the opposition. The election ofÂ  deputy chairman will also take place that day.

Speaking to the media following the meeting, MQM convener Khalid Maqbool Siddiqui said that he considers it the party’s “good fortune” that the former prime minister had come to meet them.

He said that a decision on the party’s final strategy would be reached when the Raabta (Coordination) Committee convenes later today.

Gilani, who emerged successful in the race for the Senate seat from Islamabad after defeating government candidate Abdul Hafeez Shaikh, said that the PPP’s delegation had already met the MQM at the provincial level earlier.

“The PPP has done a lot of work with the MQM in the past,” said Gilani, recalling that when amendments to the Constitution were being discussed when he was the prime minister, the MQM had been very supportive.

He said he is now again calling on the MQM to cooperate with the PDM in the name of the Constitution and law. “We contested the Senate election in a constitutional manner,” he added.

Gilani said that after the Senate election, there is a “celebratory atmosphere” in the country.

“The vote we got in the Senate election was a vote of confidence against the prime minister,” the PPP leader said, adding: “It is wrong to use the word ‘bikao’ (sellout) for government representatives that got 500,000 votes.”

He said that “those who voted for us who do not need money”, while regretting that the prime minister is “doubting members of his own party”.

“It seems someone told the prime minister to take a vote of confidence and no one will bother him for six months,” Gilani added.