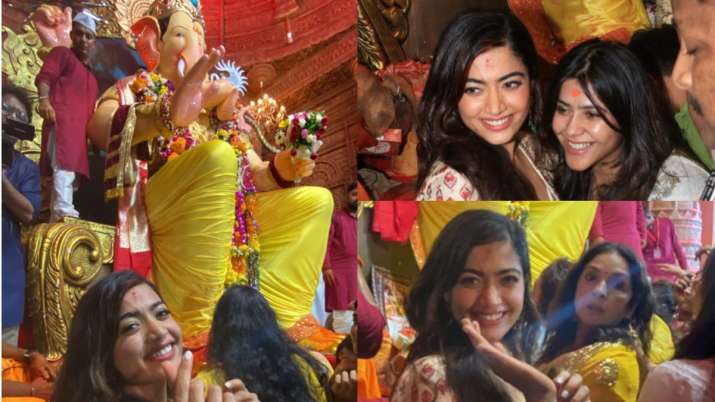 The trailer of the family entertainer film GoodBye was unveiled on Tuesday. Producer Ekta Kapoor, actress Rashmika Mandanna and Neena Gupta were present at the trailer launch event which took place in Mumbai. Soon after the launch of the trailer, the team was snapped at Lalbaugcha Raja Pandal where they went to seek blessings. Rashmika looked stunning in an off-white in an ethnic co-ord set. She also posed in her signature style for the paparazzi. Neena Gupta was also present and was seen wearing a yellow attire. Take a look at the pictures below:

Earlier, during the launch, Rashmika interacted with media and shared that she is currently at a phase where she is “testing waters” with her choices. “I have always picked scripts based on my gut feeling. I believe what is meant for me will happen to me. I feel like that’s the universe’s way of saying it, so it’s purely a gut feeling. When I heard the script (of ‘Goodbye’). I’m at a point in my career, where I’m going out and testing waters. I don’t know what’s right and what’s wrong. I don’t know what people expect of me. I am an actor and I want to do good films,” she said.

Goodbye is a family drama that highlights themes of self-discovery, family dynamics and celebration of a journey called life. It also stars Amitabh Bachchan, Pavail Gulati, Elli Avram, Sunil Grover, Sahil Mehta and Abhishek Khan. The movie marks the first collaboration between Amitabh Bachchan and Rashmika Mandanna, who recalled her first meeting with the megastar on her birthday two years ago. Produced by Ektaa R Kapoor’s Balaji Motion Pictures in association with Good Co, the film is slated for a worldwide release in cinemas on October 7.

Rashmika Mandanna will also be seen in another Hindi film Mission Majnu opposite Sidharth Malhotra.