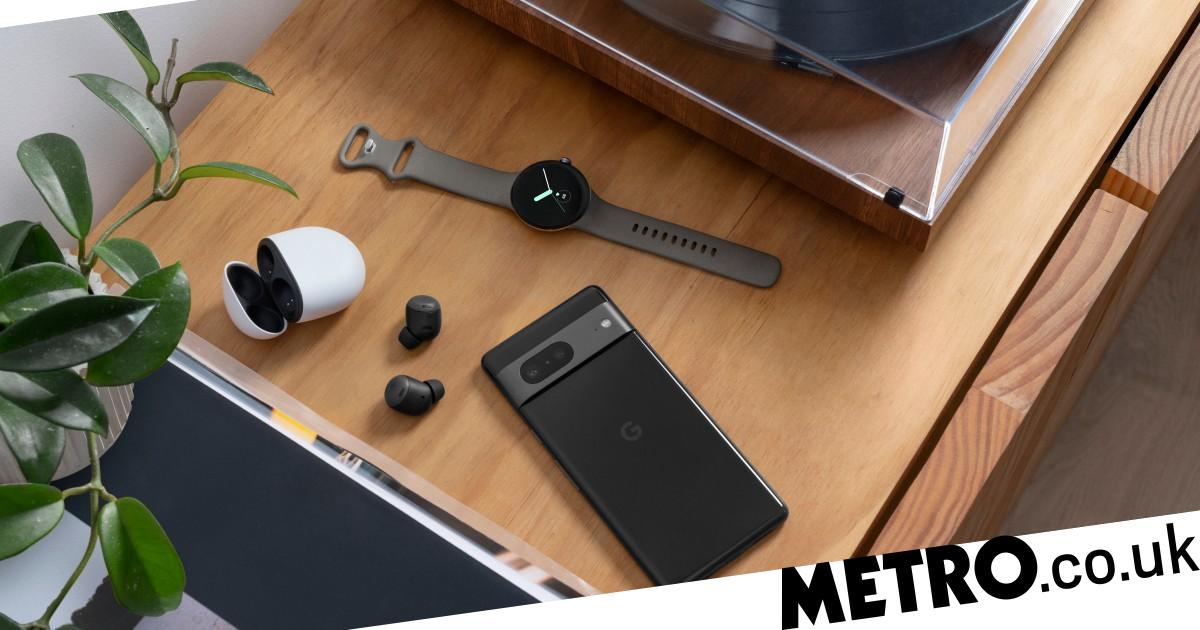 Google has unveiled two new Pixel phones alongside a smartwatch that builds on its acquisition of Fitbit last year.

The Pixel 7 and Pixel 7 Pro are Google’s answer to the iPhone 14 and iPhone 14 Pro from Apple and arrive running the latest version of Android.

Meanwhile, the Pixel Watch is the company’s first wearable device and is designed to sync up with pre-existing Fitbit accounts.

The new gadgets were revealed at a ‘Made by Google’ event in California livestreamed around the world.

Both of the Pixel 7 phones run on Google’s second-generation Tensor processor that uses artificial intelligence to streamline performance and efficiency.

The difference lies in the screen sizes, battery life and photography features. The Pixel 7 has a 6.3-inch display while the larger, more expensive Pro measures in at 6.7-inches.

The Pixel 7 Pro has an upgraded telephoto lens on the rear-facing camera for a better zoom.

Like the Apple Watch, there are a number of different bands to choose from, depending on whether you want to prioritise fashion or fitness.

Although the Pixel Watch runs Google’s WearOS, it’s been designed with Fitbit’s platform in mind. There’s a heart-rate sensor and 40 available exercise modes that take advantage of the built-in GPS.

‘This is what we have been building up to for a while: delivering a lineup of beautifully designed Pixel phones, watches and earbuds that work together to understand your needs and deliver the helpfulness you expect from
Google,’ the company said in a press release.

The line-up will also be joined by a new Google Pixel tablet later next year.

The Pixel 7 is available to pre-order today starting at £599 while the Pixel 7 Pro starts at £849. Both phones will be available for general sale starting on the 13th of October.

The Pixel Watch is available for £339 for the Bluetooth/WiFi version and £379 for the cellular model that includes 4G LTE. It also includes six months of Fitbit Premium and three months of YouTube Music Premium thrown in. Meanwhile, the accessory bands start at £49.

While Pixel phones have their legion of fans, not everyone was impressed.

‘All major phone makers are focusing on making already good products even better, but there’s little in the way of disruption,’ he added.

‘It is perplexing that Google wants be in the cut-throat business of manufacturing smartphones, and it is hard to see how it is a profitable venture for the company.

‘We assume Google sees Pixel products as a demonstration of “the art of the possible” when it comes to Android smartphones. Furthermore, it’s a way of keeping other Android licensees on their toes in terms of support for new features.’


MORE : Google is rolling Assistant, Calendar and Tasks reminders into one