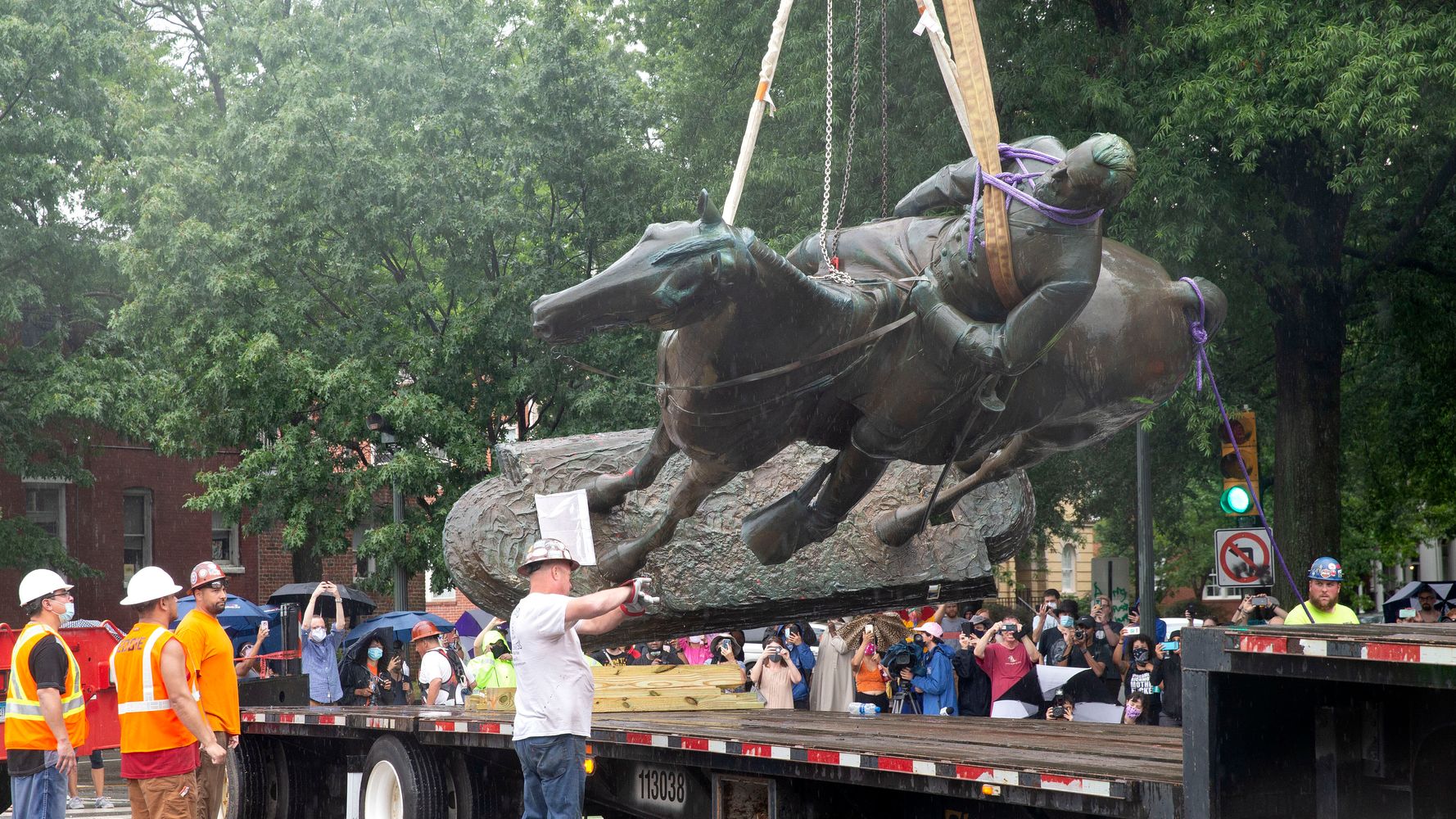 The Virginia Supreme Court ruled on April 1 that the city of Charlottesville could remove two Confederate statues that stand on public property, which activists and local leaders have long sought to remove.

In response, Snyder told Daniel Grimes, a reporter for Charlottesvilleâ€™s NBC 29, that he opposes the removal efforts that have swept the commonwealth in recent years.

â€œOur history is our history and we canâ€™t have a Stalinist type of regime that every time you have a new leader you wipe out the history from the leader before,â€ Snyder told Grimes.

â€œWe have a complicated history in America and in Virginia,â€ he continued, according to tweetsÂ that Grimes posted Monday afternoon. â€œI have a six year old daughter. She needs to learn all of it. She needs to learn that sometimes good people do bad things and sometimes bad people are capable of doing remarkable things. Thatâ€™s our history, we need to learn it all. Virginia has had a front seat to all of it.â€

The comments are similar to remarks that Snyder,Â one of 10 candidates pursuing the Republican nomination for governor in Virginia, made in late March during a Zoom meeting with the Spotsylvania County Republican Party, according to a video snippet from the meeting provided to HuffPost. The video shows Snyder responding to a question from someone on the call, but does not include the question itself. However, his response is nearly identical to the one he gave Grimes about the Charlottesville decision this week.Â

â€œShe needs to be able to know that good people sometimes do bad things, and bad people sometimes can accomplish remarkable things,â€ Snyder says in the Zoom call, again referring to his daughter. â€œThatâ€™s life, thatâ€™s business, thatâ€™s history, and she needs to be able to know that. So I think erasing our history is dead wrong. I want to preserve Virginiaâ€™s history.â€ (You can watch the video from the Zoom call above.)

Snyderâ€™s campaign did not respond to multiple requests for comment.

No state in the country is home to more Confederate monuments and memorials than Virginia, the erstwhile seat of the Confederacy. As of last year, Virginia was home toÂ more than 200 memorials to Confederate generals and political leaders, including the schools, roads and highways named for them. But as in other states, those memorials have faced fierce opposition for decades, particularly from Black Virginians and historians who decry the existence of totems to the leaders of a racist rebellion meant to preserve legal slavery in the United States.

Nationwide efforts to remove the statues have intensified in recent years, after a mass shooting at a Black church in South Carolina in 2015 and a deadly white nationalist rally in Charlottesville in 2017. The rallyâ€™s organizers chose Charlottesville in large part because the city council had voted to remove a statue of Confederate Gen. Robert E. Lee, a Virginia native, from a municipal park in the city.Â

Similarly to Snyder, many Republican lawmakers have argued that the statues are vital to historical preservation, and have characterized efforts to remove them as â€œmob rule,â€ a racist dog whistle they have used repeatedly on the campaign trail.

But Snyderâ€™s stance puts him at odds with a growing number of Virginians. Polls have shown that the stateâ€™s residents are evenly split on the idea of removing Confederate statues, but opinion has shifted away from favoring preservation since the Charlottesville rally. And in 2018, Sen. Tim Kaine (D) handily defeated GOP nominee Corey Stewart in a race where the Republican candidate was defined by his support for symbols of the Confederacy and other racist and xenophobic policies.

Last April, as yet another wave of Confederate statue removals swept the country, Virginia Gov. Ralph Northam (D)Â signed a law allowing the removal of monuments from public property. A Confederate monument near Charlottesville was taken down in July, making it one of the first memorials removed under the new law. Another statue of Lee that stands in Richmond, the state capital, is slated for removal, although its fate is pending thanks to lawsuits seeking to save it. Richmond Mayor Levar Stoney, meanwhile, last year called for the removal of four more Confederate statues that stand along Monument Avenue, which serves as a boulevard-like memorial to the rebellion.

Historians and activists saw the new laws as a â€œtipping pointâ€ for Confederate statues nationwide, given the prominence of Virginiaâ€™s monuments and its status as the onetime capital of the Confederacy. And last year, Virginia removed or renamed at least 71 Confederate symbols, more than any other state in the nation, according to the Southern Poverty Law Center.

Snyderâ€™s defense of the statues is only the most recent evidence that Virginia Republican candidates are still willing to embrace the racist monuments in an effort to appeal to the partyâ€™s increasingly radical base â€• even as it continues to cost the GOP, which lost majority control of both chambers of the Virginia state legislature in 2019.

The Virginia GOP this year decided to choose its gubernatorial nominee at a â€œremote votingâ€ convention on May 8, rather than in a traditional primary election. The move was widely interpreted as an effort to thwart upstart campaigns from candidates like state Sen. Amanda Chase, a far-right acolyte of former President Donald Trump who attended the â€œStop the Stealâ€ rally that preceded the Jan. 6 insurrection at the U.S. Capitol.

GOP voters will still have some say in choosing the partyâ€™s nominees, though â€• and Snyder, an entrepreneur and former Fox News contributor, is among the candidates still attempting to position themselves as authentic heirs to Trump in the commonwealth. In February, Snyder said he wanted to compile â€œNFL-style scouting reportsâ€ on Virginia election officials, as part of a broader embrace of the sort of election-related conspiracies, spread by Trump, that helped fuel the Capitol riot.

And Snyder, like most of the GOPâ€™s gubernatorial candidates in Virginia, has refused to say whether he believes that President Joe Biden won the 2020 election legitimately.

He has also adopted the sort of radical anti-immigrant rhetoric favored by both Trump and Stewart, who served as the Trump 2016 campaignâ€™s co-chair in Virginia before running for governor the following year. In a recent ad, Snyder pledged to â€œtake violent illegals off our streets,â€ and claimed that undocumented immigrants bring â€œcrime and gangs into our communities.â€ On his website, Snyder says he opposes allowing undocumented immigrants to pay in-state tuition at Virginia universities, and that as governor, he would defund so-called â€œsanctuary cities,â€ or jurisdictions that refuse to assist the federal government in immigration and deportation proceedings.

At another event in late March, Snyder concluded his stump speech with the suggestion that he was the sort of candidate who could beat up on a Democratic opponent this fall. After a brief aside about how â€œDemocrats only see color,â€ Snyder pointed to blue signs for his campaign and black ones for Republican state Rep. Travis Hackworth, who won a special election for a state Senate seat in March. The colors on the signs, Snyder said, were indicative of what GOP candidates would do to Democrats in elections this year.

â€œWe are going to beat up the Democrats, make them black and blue,â€ he said.