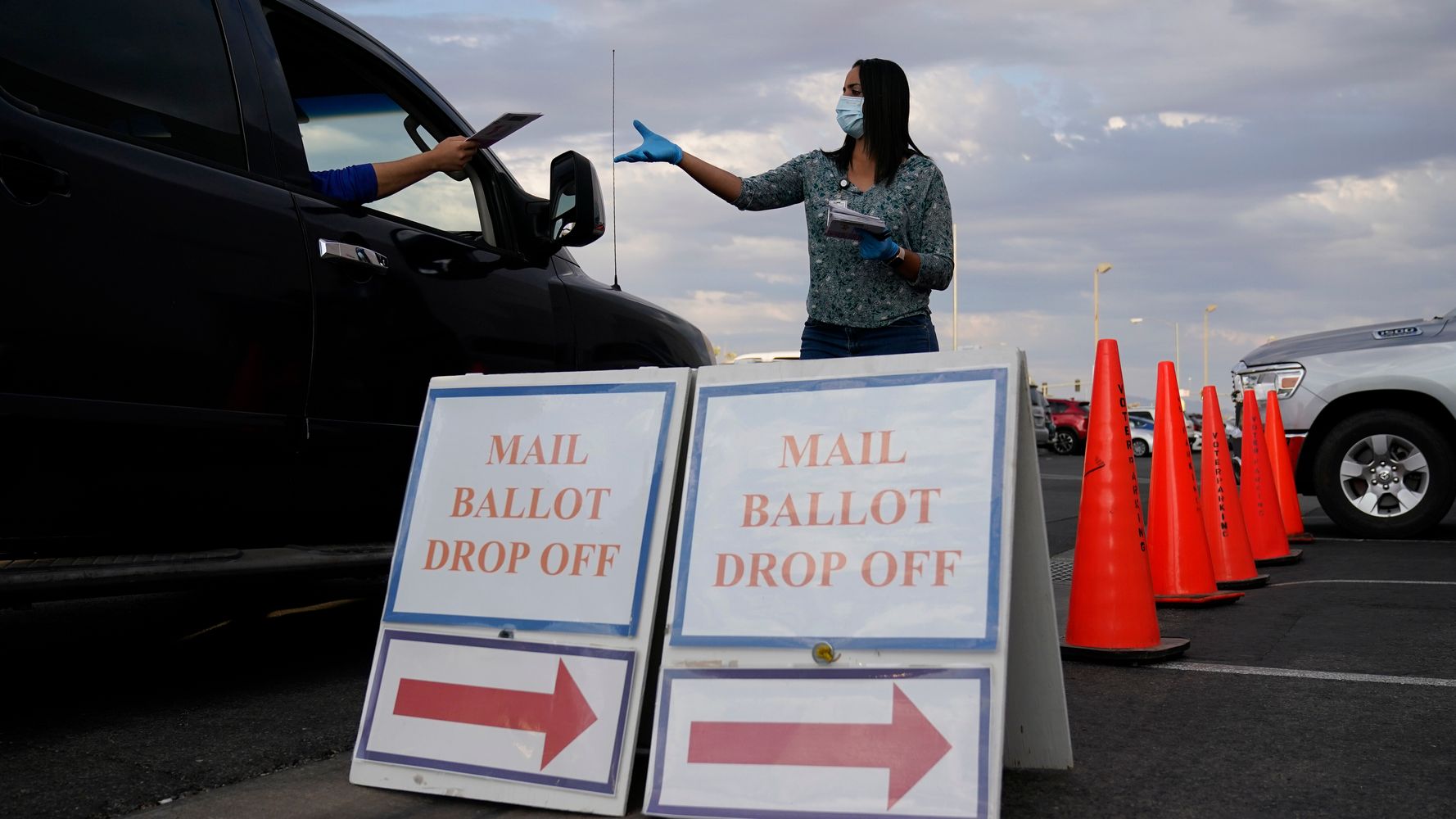 State and local officials took swift action in 2020 to ensure voters could access the polls with mail ballots and alternative voting options in 2020 during the COVID-19 pandemic. The result was a safe, secure, fraud-free election with the highest voter turnout in 100 years.

But instead of lauding election officials for their work under difficult circumstances, state Republican politicians across the country chose to scapegoat them and pass laws limiting their ability to respond to changing circumstances while threatening them with significant criminal sanctions to keep them in line. In some cases, Republicans stripped their state election officials of their powers entirely.

These new laws were all inspired by former President Donald Trumpâ€™s lie that the successful changes implemented by state and local election officials led to widespread election fraud in 2020. Republicans at all levels of government have refused to challenge the former president after his lies led to an insurrection at the U.S. Capitol. Instead, theyâ€™ve taken up his fight.

â€œThere is absolutely no question that this is a reaction to the 2020 election and the Big Lie that somehow the election wasnâ€™t legitimate,â€ said Lawrence Norden, an elections lawyer with the Brennan Center for Justice, a nonprofit that backs voting rights. â€œThereâ€™s no question about that.â€

The limitations on election officials, the new rules making it harder to vote, and the introduction of vague criminal penalties scaring people away from working the polls or running for a local election administration office are all a part of Trumpâ€™s ongoing campaign to delegitimize elections across the country.

â€œItâ€™s driving thousands into retirement,â€ said Adrian Fontes, the former top elections official for Maricopa County, Arizona, and a Democrat now running for Arizona secretary of state. â€œItâ€™s a less safe environment because of the mounting threats. Itâ€™s had a significantly negative effect. And itâ€™s because Donald Trump doesnâ€™t believe in democracy and neither do his supporters.â€

Making It Harder To Make It Easier To Vote

The restrictions on election officials fall into a handful of categories, according to Norden. First, there are the â€œrestrictions on doing things that were done in 2020 to make it easier,â€ he says.

Republicans in Georgia, Iowa, Kansas and Texas banned or limited local officials from sending mail-in ballot applications to voters who donâ€™t request them. Officials in Florida can no longer send mail-in ballots to voters who didnâ€™t specifically request them. In Florida, Georgia, Iowa and Indiana, local election officials are now limited in their ability to place and run mail-in ballot drop boxes. Iowa, Montana and Texas all placed limits on the hours and locations of polling sites. And Georgia banned mobile voting sites, while Texas forbids drive-thru voting locations.

â€œIn each case, itâ€™s in reaction to how the particular thing impacted the 2020 election,â€ Norden said.

Texasâ€™ bans on mailing absentee ballot applications, drive-thru voting and 24-hour voting sites came after Harris County, a large metropolitan area that is home to Houston and has trended heavily to Democrats in recent elections, deployed all three policies during the 2020 election to try and protect voters from the pandemic while maintaining their access to the polls.

In 2020, Georgiaâ€™s state board of elections voted to allow counties to deploy drop boxes during the COVID-19 pandemic, and Georgia Secretary of State Brad Raffensperger sent out mail-in ballot applications to all voters for the June 9 primary (although not the general election). The four big counties in the metro Atlanta area â€• Cobb, DeKalb, Fulton and Gwinnett â€• set up 111 drop boxes to collect mail ballots for the general election. But now, the GOP-run state legislature has limited them to just 23 drop boxes.

â€œI donâ€™t think there is any question that this is meant to chill the ability of election officials to do outreach to their voters and to ensure their voters can cast ballots.â€

– Lawrence Norden, elections lawyer with the Brennan Center for Justice

However, the law is currently stalled because all 50 Republican senators voted to filibuster it. There are also lawsuits filed in state and federal courts challenging all of these laws.

The second way that GOP-run states have limited election officials is to strip them of their power to run elections or threaten them with criminal sanctions.

In Arizona, Republicans stripped the authority to oversee elections from Secretary of State Katie Hobbs, a Democrat, and gave it to Attorney General Mark Brnovich, a Republican, for the 2022 election. In Georgia, the legislature booted Raffensperger from a seat on the state board of elections for the 2022 elections after he refused Trumpâ€™s entreaties to â€œfindâ€ enough votes to overturn the stateâ€™s 2020 election results.

Notably, the Arizona and Georgia Republican legislatures only stripped their secretaries of state of their election oversight roles through 2022, when both offices are up for election. In each case, there are Republicans running for the office who openly embrace Trumpâ€™s election fraud lies and could regain election oversight authority in time for a third Trump presidential run, if they win.

Republicans in Kansas and Kentucky also placed new limits on their Democratic governorsâ€™ ability to issue election-related emergency orders connected to the COVID-19 pandemic. In Georgia, Republicans made it easier to purge local officials and replace them on a partisan basis. There is already a preliminary effort to purge election officials in Fulton County, the stateâ€™s most populous county and home to Atlanta, and replace them with people more amenable to the Republican-run legislature.

In Iowa, Republicans didnâ€™t directly strip local election officials of their ability to run elections but chose instead to hang the threat of criminal sanction and fines up to $10,000 over their heads. County auditors, who run local elections and have had some discretion in implementing election rules in the past, must now solely follow guidance from the Iowa secretary of state or face potential criminal penalties.

â€œI donâ€™t think there is any question that this is meant to chill the ability of election officials to do outreach to their voters and to ensure their voters can cast ballots,â€ Norden said. â€œAnd to just scapegoat them for election results that some voters might not like and make them villains.â€

For Roxanna Moritz, the former Scott County auditor and an Iowa Democrat, the new law threatening fines and criminal charges for technical infractions was the last straw. Already burned out from the COVID-19 pandemic, the lies about election fraud that began long before Trump lost the 2020 election and the constant threats from Trump supporters targeting her and her office, Moritz decided to retire despite winning reelection for a fourth time in November.

Moritz is currently under investigation for approving $3 extra pay per hour for election workers without getting approval from Scott Countyâ€™s board of supervisors during the crush of the pandemic in 2020. While working 75-80 hour weeks, she said, she forgot to inform the board of a pay raise for the smaller pool of workers who still signed up to work during the pandemic. Under the new law, itâ€™s possible Moriz could face significant sanction for boosting workersâ€™ pay without notice to the board, although the law does state that misconduct must be â€œwillful.â€

â€œIt was really hard to leave the way that I left,â€ Moritz said. â€œI had just got reelected and I feel like I let my constituency down by doing what I did. But I was not prepared, if I made an honest mistake, being taken to the woodshed and possibly being fined $10,000 and charged with a felony.â€

More election officials may look for the door, Moritz believes, as Republicans continue to scapegoat them and as the harassment they face keeps mounting.

â€œAs soon as anyone gets charged, it will be the end of anyone wanting to step forward just in case they make a mistake,â€ Mortiz said.