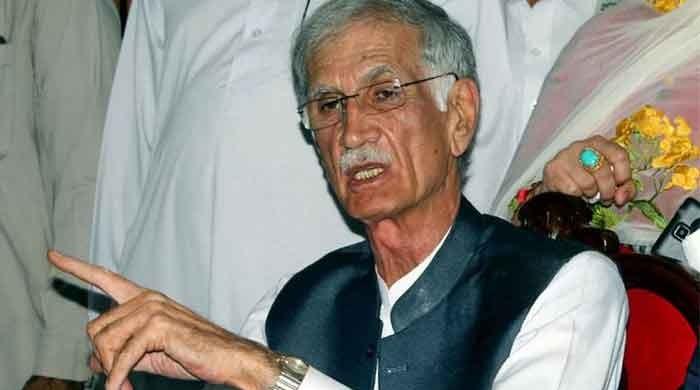 PESHAWAR: The government and the Awami National Party (ANP) put aside their differences after Defence Minister Pervez Khattak apologised to the party’s leadership for Interior Minister Ijaz Shah’s comments from a few days ago, reported Geo News.

“We brought a jirga, and the ANP accepted it […] a misunderstanding had taken place, which has been clarified,” Khattak said while addressing the media in Peshawar on Monday.

The defence minister reiterated his apology, saying: “If any of our statements have offended the ANP leadership, then we apologise for it.”

The interior minister said the government delegation was leaving “happily” after meeting the ANP leadership. “I came here because you had misunderstood what I said.”

Khattak and Shah visited ANP’s headquarters on the directives of Prime Minister Imran Khan to apologise for the recent controversial remarks by the interior minister.

Speaking at a recent ceremony at his hometown Nankana Sahib, Punjab, the interior minister had said the proscribed Tehreek-i-Taliban Pakistan had in reaction to the ANP policies on terrorism attacked the party leadership and killed many of the party leaders, including Bashir Ahmad Bilour and Mian Rashid Hussain, the lone son of Mian Iftikhar Hussain.

The statement had stirred a strong reaction from the ANP, which had on November 2 called for the interior minister’s resignation and formation of a truth commission, saying his statement had belittled the sacrifices of the ANP leaders and activists in the war against terror.

The ANP provincial spokesperson, Samar Haroon Bilour, had said if the interior minister did not resign or was not removed from his office within 10 days, the party would stage a march to Islamabad on November 11 to seek his removal.

Talking to this correspondent on Sunday, Khattak said he would visit the Bacha Khan Markaz on the directives of Prime Minister Imran Khan and offer an apology to the ANP leadership and try to remove the misunderstandings created after the statement of the interior minister.

Pervez Khattak said he would be accompanied by Interior Minister Brigadier (retd) Ijaz Shah, Chief Minister Mahmood Khan and other ruling party members during a visit to the Bacha Khan Markaz.

The federal minister said he would meet the ANP leaders as the party and others had suffered a lot in the war on terror.