Govt scrambles to wrest control back from PTI | The Express Tribune 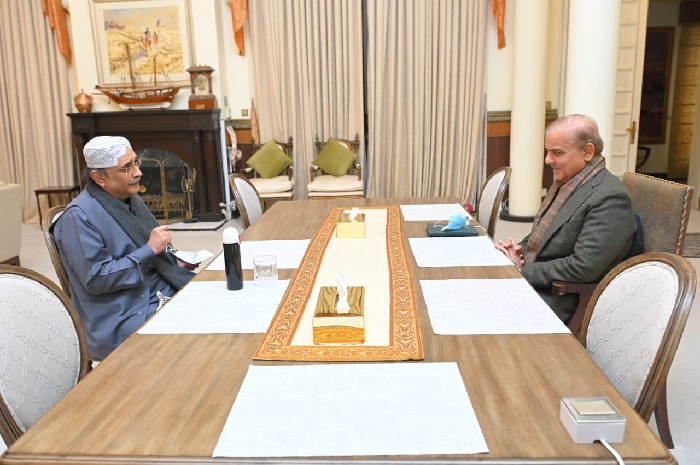 
As PTI prepares to launch its ‘final assault’ and dissolve provincial assemblies, there was a whiff of panic in the air on Tuesday and a discernible note of alarm slipping into coalition partners’ behind-the-scenes meetings held to plot strategy in tandem with a contingency plan if snap polls become an unavoidable reality.

A flurry of political activity was witnessed, including Prime Minister Shehbaz Sharif’s two separate meetings with the key ally of his government and a huddle with the senior leaders of his party to chart a way out of the dreaded scenario.
Meanwhile, in Punjab – where the Imran-led party is in power – Punjab Chief Minister Chaudhry Pervaiz Elahi and former federal minister Pervez Khattak held a meeting to kick the preparations into high gear.

The prime minister lend his ear to the head of the key coalition partner after he called on him at the Prime Minister House to gauge the political challenges arising after the PTI chief’s announcement that he would opt out from the “corrupt system” to force snap elections on the ruling alliance.

Moreover, it added, the two leaders also discussed issues related to economic improvement, the relief that could be provided to the masses and the development projects.

Separately, PM Shehbaz headed a meeting of senior party leaders for the consultation on Imran Khan’s announcement to dissolve assemblies and constituted two committees comprising federal ministers and lawyers to beat back Imran’s move on both legal and political front.

Sources privy to the development revealed that Interior Minister Rana Sanaullah will be appointed as the convener of the political committee while former law minister Azam Nazeer Tarar will head the legal team.

Similarly, the legal committee will comprise lawyers belonging to the coalition parties.

PM Shehbaz has sought recommendations from both committees within two days. The political committee has been entrusted with the task to hold meetings with the coalition partners, sources further said.

A key PML-N leader, requesting not to be named, said that “PML-N is ready for elections”. While throwing a gauntlet at PTI chief Imran Khan, the PML-N leader said that Imran shouldn’t waste time and dissolve the assemblies immediately.

“We are ready for elections; no heaven will fall; the most that can happen is that we can lose but that shouldn’t be a reason to block Imran’s move and delay polls,” he said.

He pointed out that there was more hype about blocking PTI’s move of dissolving the assembly in the media than inside the party circles, saying a no-confidence motion could only delay dissolution for a few days if it doesn’t succeed.

On the option of imposing the governor’s rule, he said that “it is no joke to impose governor’s rule”, saying it required so many grounds and even if such a decision was taken, it would be difficult to sustain it for long as it can be challenged and the courts can strike it down.

To a question about PML-N supremo Nawaz Sharif’s return before the general elections, he said that it was up to PML-N to go ahead with or without Sharif and that there would be plenty of time for taking a decision in this regard.

Meanwhile, commenting on tabling a no-confidence motion against Punjab CM Pervaiz Elahi, a PPP leader also agreed with the PML-N leader’s view that it could buy the ruling alliance some time if not passed, saying that the party leadership was working on getting the provincial chief’s support back.

“If Pervaiz Elahi can go to PTI after Dua-e-Khair, we can hope that he can come back to us as well,” he quipped. He was referring to Elahi’s decision to join PTI after accepting the then-united opposition’s offer to become Punjab’s CM on the condition that he would support them in the no-confidence motion against the ex-premier Imran Khan.

However, some others believed that Imran would not really go for the dissolution of the assembly and his announcement was just a reminder for the powerful quarters that the party still holds cards and has some leverage that can be used when the time is right.

A JUI-F leader said that Imran’s statement of abandoning the system would prove to be like his earlier announcements where he promised millions of houses and jobs. “The U-turn master would soon take a U-turn on the dissolution of the assemblies,” JUI-F’s official statement issued on Tuesday stated.

On the other hand, Punjab Chief Minister Chaudhry Pervaiz Elahi scoffed at the government’s hints at imposing the governor’s rule and bringing a no-trust motion in Punjab, saying it will remain “a distant dream” of the opposition.

He added that the provincial assembly will run as per the constitution and not “at the whim of anyone else”.

The chief minister made these remarks during a meeting with former federal minister Pervez Khattak on earlier on Tuesday.

Pervaiz Elahi said the opposition should keep in mind that the provincial assembly will run as per the rules and the Constitution.

He highlighted that the popularity of the former premier Imran Khan has increased manifold. Imran has raised awareness among the masses about self-esteem, he said.

“The unnatural alliance of 13 political parties is breathing its last,” he maintained.
The chief minister said the incompetent rulers have ruined the lives of common citizens and the time is not far when these rulers will start fighting with each other.
He underscored that Imran Khan’s politics is beyond his personality and personal gains contrary to the current rulers of Islamabad. “We will continue to support Imran Khan as we did in the past,” he maintained.