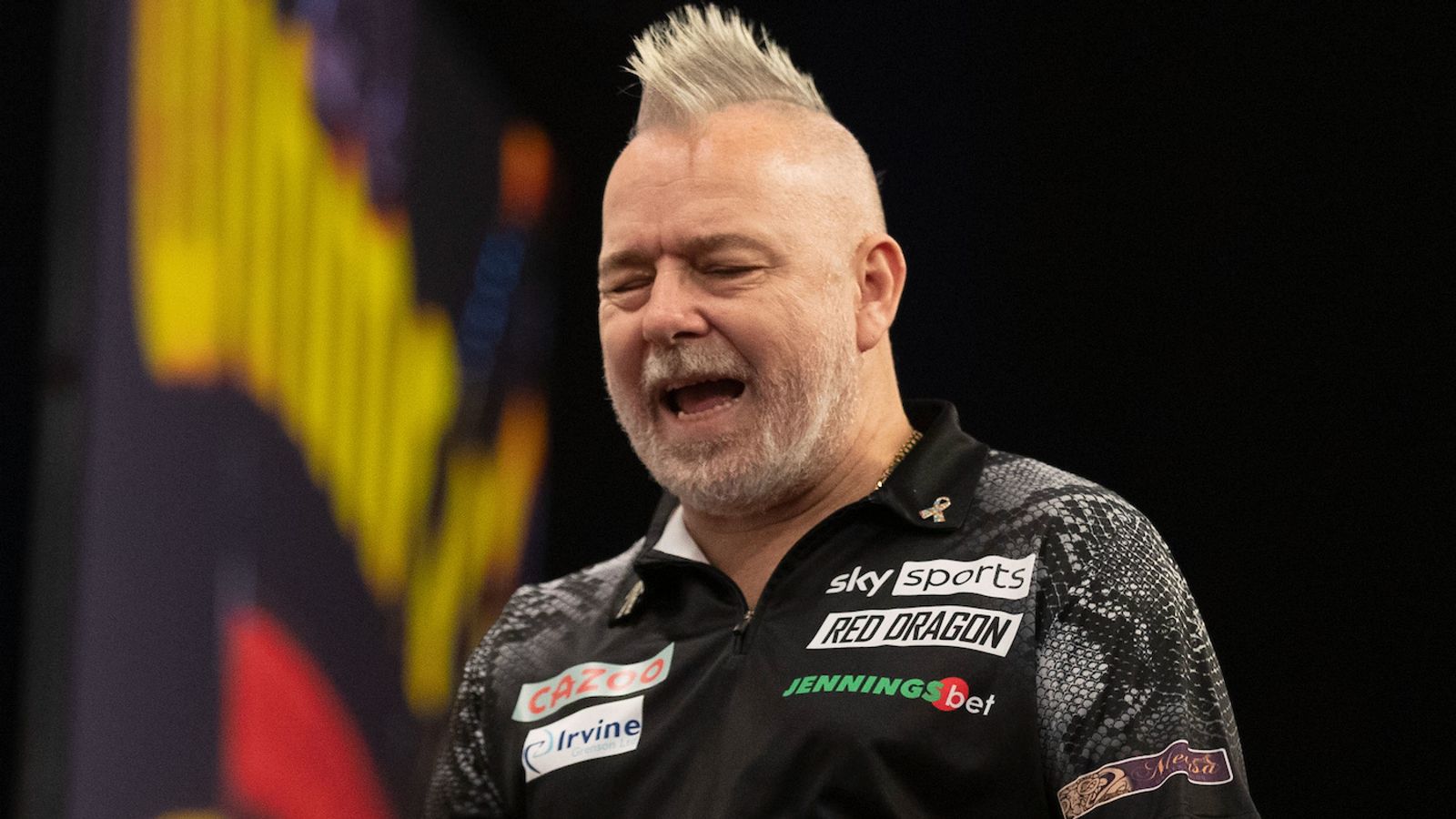 World Champion Peter Wright is dumped out of the Grand Slam of Darts after suffering defeat to Nathan Aspinall while Josh Rock sets up a knockout encounter with Michael van Gerwen watch every dart live on Sky Sports every day through to the final on Sunday, November 20

World Champion Peter Wright was sensationally dumped out of the Grand Slam of Darts by Nathan Aspinall while Josh Rock set up a blockbuster clash against Michael van Gerwen in Wolverhampton.

On a spectacular night, Aspinall produced a stirring comeback to knock out Wright, while Ross Smith delivered a record-breaking display in his victory over Van Gerwen.

‘The Asp’ reeled off four straight legs from 2-1 down to eliminate World Champion Wright, as Groups E-H concluded on a dramatic Day Four at the Aldersley Leisure Village.

Aspinall sent Wright crashing out with these winning darts…

Aspinall sent Wright crashing out with these winning darts…

“I’m so happy to get through and I can’t believe I’ve topped the group,” admitted Aspinall, who will meet Jermaine Wattimena for a place in the quarter-finals.

“Peter is going through a tough time at the moment. I don’t think his head was in the game and I give my best wishes to Jo, but I had to go up there and do my job.”

Wright required three legs to book his place in the knockout stages, and he was punished for squandering two darts at tops for a 3-1 lead in a crucial fourth leg.

Aspinall capitalised and followed up legs of 14 and 13 darts with a 106 checkout to lead 4-2, and despite spurning five match darts in an edgy conclusion, he regained his poise to wrap up proceedings via double eight.

His 5-2 success saw him top the group on leg difference, and the Stockport star advances alongside debutant Alan Soutar, who defeated Fallon Sherrock 5-2 earlier in the night.

“Watching that match backstage – that was the worst feeling I’ve ever had in darts. It was horrible,” admitted Soutar, who will now play Jonny Clayton in Thursday’s second round.

“The Grand Slam was a free roll for me and I’m now in the world’s top 40 after less than two years on the tour, so I’m absolutely delighted.”

Elsewhere, Van Gerwen sealed top spot in Group G despite succumbing to an inspired Smith in arguably the match of the tournament so far.

‘Smudger’ was assured of qualification before his tie against Van Gerwen following Luke Woodhouse’s defeat to Nathan Rafferty, and he produced a blistering display to prevail in a nine-leg epic.

“I wanted to show everyone what I can do against the best in the world,” said Smith, who averaged 107.9 and hit a maximum in every single leg.

“Hopefully I can kick on now. I’m loving my darts and I’m so happy with life in general, so I just want to keep going.”

MVG nailed this stunning 145 checkout during his defeat against Smith

MVG nailed this stunning 145 checkout during his defeat against Smith

Woodhouse saw his qualification hopes dashed in a thrilling nine-leg affair against Nathan Rafferty, despite averaging 101, crashing in five 180s and converting the first 170 finish of the tournament.

Rock qualified for the last 16 after hitting 121 against Humphries

Rock qualified for the last 16 after hitting 121 against Humphries

In Group H, emerging Northern Irish star Josh Rock joined Luke Humphries in the last 16, after running out a 5-3 winner in a captivating showdown between the pair.

Scott Williams posted a stunning 107 average to come through a high-quality clash against Ryan Searle in the other Group G tie, registering six 180s and two 11-darters in the process.

“I believe I can win this tournament,” insisted Rock, who will play three-time Grand Slam champion Van Gerwen in a huge last-16 tie on Thursday night.

“It will be a fantastic match. I’ve never played Michael before – he’s the second best player of all time in my opinion, but I’m not scared of playing him.”

Wattimena sealed the deal with a clinical 108 kill, and this result meant that Damon Heta needed to whitewash Clayton to keep his Grand Slam dream alive.

The Australian was unable to produce the heroic escape act, although he bowed out on a high, averaging 93 and landing three 180s to inflict Clayton’s first defeat of the campaign.

The best of the action from another dramatic night in Wolverhampton

The best of the action from another dramatic night in Wolverhampton